A local reporter explains how the blast has fueled public anger BEIRUT -- As the explosion ripped through Lebanon's capital around 6 o'clock on the evening of Aug. 4, residents felt the earth tremble. "An earthquake," my husband shouted. "Run, run!"

As we hurried to the door, a huge blast echoed and doors suddenly opened. In the stairwell, we still thought we were being rocked by an earthquake as windows broke, their shards falling to the ground like rain.

No one was hurt in my area, but horrified citizens were crying, kids screaming.

It only took a few minutes for us to hear what really happened -- a massive explosion had rocked the port area, a 10-minute drive from my flat in the Antelias neighborhood.

My phone began ringing with callers asking if we were OK. I then decided to leave my family and rush to the blast site to report on what had happened.

I started driving toward Beirut Port. A large cloud of black smoke covered the area, and shattered glass littered the main highway linking central Beirut with areas north of the capital. As I approached, I started to learn more about the catastrophe. The explosion damaged every building in a 10 km to 15 km radius.

The scene took me back to the 1979 American war film "Apocalypse Now." Dozens of cars were ablaze, their passengers dead inside. Survivors were covered in a gray powder; blood ran from their heads and sprung from their palms. Ambulances and firefighters were rushing to the scene. It was too much to handle.

I stopped my car, my attention going to two screaming children. I spotted their mother, a young lady, dead in her car. She had sustained a bad head injury.

I ran to an ambulance, shouting, "Help these kids, please. Their mother is dead in the car." The children were grabbing my arms, screaming in horror, "Mama, mama!"

The scent of blood filled the area.

Not one building was left unscathed in a radius of 10 km to 15 km; it was as if a civil war battle had torn through the area. In five minutes.

The blast left more than 300,000 displaced, 158,600 wounded and at least 170 dead. Dozens remain missing. Many of the displaced are sheltering churches, hotels and schools.

"Lebanon will not be the same after Aug. 4, 2020," said Lina Boubes, a volunteer helping the displaced. 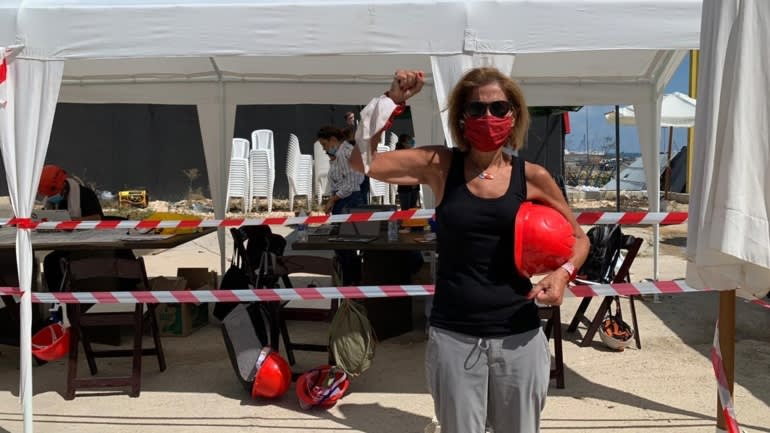 Lina Boubes, a volunteer who is helping the displaced in Beirut.

"It felt like a mini-nuclear bomb hit my house," said Jad, a 37-year old graphic designer who lived close to the port. He lost his home to the explosion.

The blast occurred in a warehouse that was holding 2,750 tons of ammonium nitrate. The dangerous material, a favorite of farmers and terrorists alike, had been stored in the warehouse for years, neglected by the government.

After the tragedy, the government vowed to punish those responsible; prosecutors have detained at least 20 people, among them three high-ranking port officials. Some officials have called for an international probe because they do not trust Lebanon's judiciary.

The blast brought out the Lebanese people's resentment toward their corrupt political leaders. On Saturday, thousands marched in the streets and clashed with riot police; at least another 700 were wounded.

"Our leaders should be hanged," said Rola Zaidan, a protester in downtown Beirut. "We do not believe in them anymore."

Prime Minister Hassan Diab on Monday announced his cabinet's resignation. "Corruption," he admitted, "is rooted in every juncture of the state [and] I have discovered ... is greater than the state."

The blast came with Lebanon's economy worse off than at any time since the 1975-1990 civil war. That sin "greater than the state" had already battered the currency, sent prices skyrocketing and sentenced many to unemployment and poverty.

"The blast will deepen the economic crisis," economic expert Hala Saghbini said. "There are no clear estimates yet but it will be billions of dollars."

Many believe corruption and a dysfunctional government paved the way for the explosion.

French President Emmanuel Macron visited Lebanon after the blast and stressed that if political and economic reforms are not carried out, Lebanon will continue to sink.

"The repercussions will be huge if reforms called for by the international community [are not] implemented," political analyst Makram Rabbah said. "That means no money for the Lebanese and more challenges ahead."

The president will consult with the parliament and appoint a new prime minister, which might take a while. In the meantime, Diab, despite his resignation, will lead the caretaker government.

Rabbah stressed that in his opinion the political establishment lacks the will and ability to lead a successful transition.

That leaves it to the Lebanese themselves to rebuild their devastated nation. If anything, the challenges ahead will further sear the blast in the country's collective memory.