BANGKOK -- Thailand's gross domestic product growth in the third quarter was higher than expected, and hinted at the possibility of economic recovery. This comes after a lackluster period from May last year, when the military staged its second coup d'etat in a decade to oust Yingluck Shinawatra after pushing out her brother Thaksin Shinawatra in 2006 -- both popularly elected prime ministers. Three months ago, the military government installed a new economic team that has implemented various grass-root stimulus measures and pushed ahead on stalled public projects. However, much remains to be done ahead of elections that have been postponed to 2017 at the earliest. 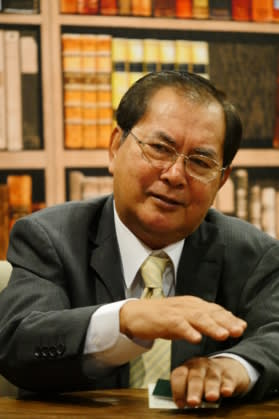 Thanong Bidaya, a finance minister to Prime Ministers Chavalit Yongchaiyudh and Thaksin Shinawatra, and a mentor to Thailand's current economic czar, Deputy Prime Minister Somkid Jatusripitak, told the Nikkei Asian Review that the junta must take full advantage of this window to lay foundations for long-term growth. He believes Thailand should industrialize, divest itself of low-paying, labor-intensive industries and streamline its perennially troubled agricultural sector.

Q. What have the economies of the Association of Southeast Asian Nations (ASEAN) taken from the 1997 financial crisis?

A. When you look at the international front, ASEAN has learnt about risk management on foreign exchange, monetary policies and fiscal discipline. These are now very well managed. However, it does not mean that we will not face problems. The largest problem for Thailand is the middle income trap. We have a low inflation rate, very low interest rates, a low unemployment rate [below 1%], but annual economic growth is only 2% or 3% -- which is very low compared to other ASEAN economies.

We have neglected to reform our economic strategy since the military coup in 2006. Everything has become so slow. I do not think we can expect growth from exports any more because demand from advanced economies will be low, and they want to be more self dependent. Avoiding the middle income trap may take many years.

Q: What do you suggest?

A. Thailand has been trying to do two things at once -- take care of the poor farming sector and the rich industrial sector. The bottom cannot compete with other agricultural countries any more as their wages are much lower than ours. For the top, industrialization is being pressured by up-coming countries like Vietnam, Indonesia and the Philippines. They are competing with us at lower wage levels. It is like Thailand is in a nutcracker.

First, we must think about which major crops remain competitive -- rice, rubber, sugar cane or tapioca. Taking sugar as an example, we need to expand to industries like candy factories or make energy and reduce exports of the primary product. For rubber, supply should be lowered to match demand. The consequence of all this will be a labor surplus that can be used for industrialization.

We are now a full-employment economy but with very low productivity. I am thinking about how to halve the farming population in 10 years from 40%. We cannot just let the poor stay poor because consumption power will not be increased. Human resource development is most important. The majority of farmers only have primary education. Our education system has not been looking at the real demand side -- what industries want. We don't have enough skilled workers.

Thailand has the nutcracker effect from neighboring countries, but we do not do much about transforming industry. Many people have negative attitudes about our industrialization -- that we should not let Vietnam or Myanmar compete with us. This is totally wrong. I think that if we transfer labor-intensive production to our neighbors, we can enjoy their consumption power to export our products. Thailand's wages will rise, and we will be able to transfer new technologies from Japan or Taiwan or China.

Q. What is your estimation of the military government?

A. I am glad the government, especially this economic team, has shown willingness to accelerate infrastructure, even without government-to- government agreements. If by the end of this year three to five mass transit railway projects can start, it will mean a lot for the business sector and the community. This government has megaprojects worth 1.8 trillion baht ($50 billion), but there is no real overall financial plan. There has been no recalculation on how much public debt will be and what economic growth could be. There is a lot of homework they still have to do.

At the moment, Somkid Jatusripitak is very active. He is coming out with a lot of new measures, and has tried to boost the confidence of industrial businessmen. He has also tried to lower the cost of living of the poor by injecting money into villages. He is trying very hard. He knows what he is doing but he always says he only has one and a half years. So he has to do everything short term with his team, and he has not yet let out the long-term strategy. He might have to work with the fiscal policy office or the National Economic and Social Development Board. He will make trips to Japan and China, so we will see.

Q. Who do you think will be prime minister after the elections?

A. We still have to wait for the new constitution to pass, then we can see how political parties will be formed. If Thaksin's party can stay, his party will win because the impact on people that he created when he was prime minister is still very strong. He must be the only prime minister [who uses] marketing techniques to make the poor appreciate what he did. But the new constitution may decide that there can be no majority party. Then a leader might come from the military or be nominated by them.

When I talked to Somkid, he was not so interested. He said he was asked to come back this time to help and hopes to do his best. He keeps telling me that another one and a half years and he can take a rest. To be prime minister, [one] has to be supported by a majority of the election results. My personal feeling is it would be good if he could become prime minister because he is clean, he has the brains and he has the guts to make decisions. Somkid is a marketing man, so he knows how to create human relationships, and can convince the military government what is good for the country. Somkid is a thinking man -- he knows what the military is thinking so he can get along with them easily.

Q. Should Thailand join the Trans-Pacific Partnership (TPP) which four ASEAN peers have already signed up for?

A. We already have ASEAN, ASEAN+3, ASEAN+6 and the ASEAN Economic Community coming. We also have the Regional Comprehensive Economic Partnership proposed by China. TPP is influenced by the U.S. which wants links to Asia -- this a fact. If Japan cannot avoid it, neither can Thailand. The U.S. and Thailand have a free trade agreement, but TPP comes with very strong terms and conditions, especially for the pharmaceutical industry. Patents and rights will create higher cost of medicines. We have to look at the poor rather than free trade. We cannot avoid TPP, and I know we will gain from it, but the problem will be the poor who get hit.

A two-time former finance minister, Thanong Bidaya has been president of Thai Military Bank and dean of the Graduate School of Business Administration at theNational Institute of Development Administration (NIDA). SomkidJatusripitakstudied under him there forhis master of business administration.