After pandemic, Thimphu may ease centuries of control of 'sinful' weed Bhutan has relaxed its tobacco ban to combat the coronavirus pandemic, whose most worrisome case entered the Himalayan kingdom from across the border. (Photo by Phuntsho Wangdi)
PHUNTSHO WANGDI and NIDUP GYELTSHEN, Contributing writersAugust 25, 2020 18:45 JST | Bhutan
CopyCopied

THIMPHU -- The remote Himalayan kingdom of Bhutan, one of the first countries to ban tobacco sales, has temporarily lifted the prohibition in the wake of the coronavirus pandemic.

The "interim measure," which has sparked a national discourse over its merits and legality, aims to curb the infections that smugglers can bring along with tobacco across the porous southern border with India, where COVID-19 cases have exploded in recent weeks.

The government has set up new temporary outlets around the country to take orders and sell tobacco to those who still use it despite the ban. Surveys in the nation of 750,000 indicate that nearly a quarter of Bhutanese age 15 and above use tobacco.

"This is not the time to change behavior. We want to be correct from the COVID-19 point of view," Prime Minister Lotay Tshering, a surgeon by profession who does not use tobacco, said on July 31 while telling parliamentarians of the government's decision to curb illegal border crossings and the increasingly lucrative black market for tobacco, according to Bhutanese media.

Bhutan's Tobacco Control Act bans the sale, cultivation, distribution and promotion of tobacco products but does allow limited imports for personal consumption. Individuals may import up to either 800 cigarettes, 1,200 bidis, 150 cigars or 750 grams of other tobacco products each month after paying the 100 percent sales tax on Indian products plus the 100 percent customs duty for third-country imports. State-owned Bhutan Duty Free is a designated "foreign source," selling tobacco through its outlets. A smoker lights up in a secluded construction site in Thimphu, Bhutan. A large proportion of Bhutanese use tobacco products. (Photo by Phuntsho Wangdi)

Bhutan's 700-km border with India, its primary trading and strategic partner, has numerous crossing points and is densely populated. Its disputed 500-km northern border with China, a nation with which Bhutan has no diplomatic relations, has no formal land crossings, and the harsh terrain makes clandestine crossings challenging and risky.

When Bhutan shut its borders in the third week of March in response to the pandemic, hundreds of trained volunteers and security personnel were deployed to the southern borders. Despite this, an average of 30 people a day were apprehended smuggling contraband for the black market, where their goods could sell for four to five times what they had paid.

The government outlets, which opened on July 31, sold tobacco from India at half the black-market rates, even with the 100 percent sales tax. "The authorities should have done this a long time ago," said Indra Gotamey, 32, an IT specialist in Thimphu who has smoked since he was a teenager. "The ban has only created a black market and criminalized people. [With its lifting] the government can also earn revenue by way of taxes."

But the measure has drawn criticism from some medical professionals. "From a health perspective, I don't see the benefit outweighing the risk," said one who wished to remain anonymous. "A number of the current government leaders come from a health background, so they must have come to a consensus for the larger interest." 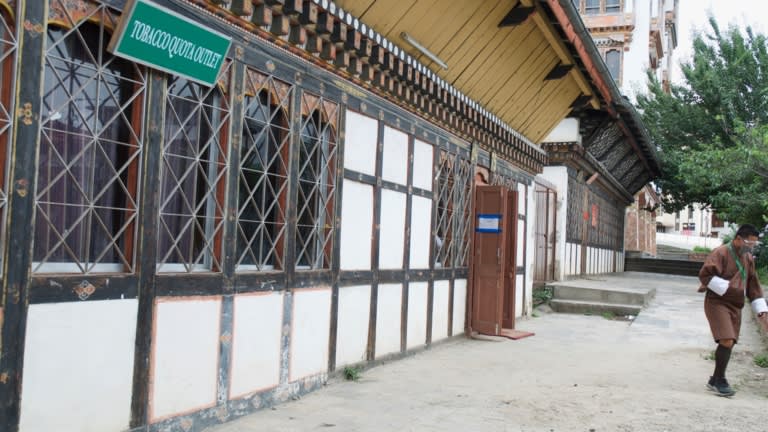 This government-operated tobacco outlet opened this month in Thimphu. (Photo by Phuntsho Wangdi)

One opposition party has accused the government of riding roughshod over the law and parliamentary processes -- even of breaching the Constitution.

Finance minister Namgay Tshering stressed that the interim measure aims to meet people's needs and not promote tobacco. "The moment we lift that measure post-COVID, the government might propose amending the tobacco law as well," he said.

Bhutan's efforts to control tobacco go back centuries. The first anti-tobacco law was passed in 1651 by the country's founding father, Zhabdrung Ngawang Namgyal, prohibiting its use in the monastic community.

In a predominantly Buddhist society where alcohol is socially acceptable -- and the leading cause of mortality -- tobacco is considered a sin. The tobacco plant is believed to have originated from the menstrual waste of a powerful demoness subdued by Guru Rinpoche, the Indian Tantric master who introduced Buddhism to Bhutan in the eighth century.

The modern anti-tobacco drive began in the 1980s with a health ministry campaign that led to districts banning local tobacco sales. In 2004 the legislature, made up mainly of elected village representatives, unanimously endorsed a proposal for a nationwide ban. 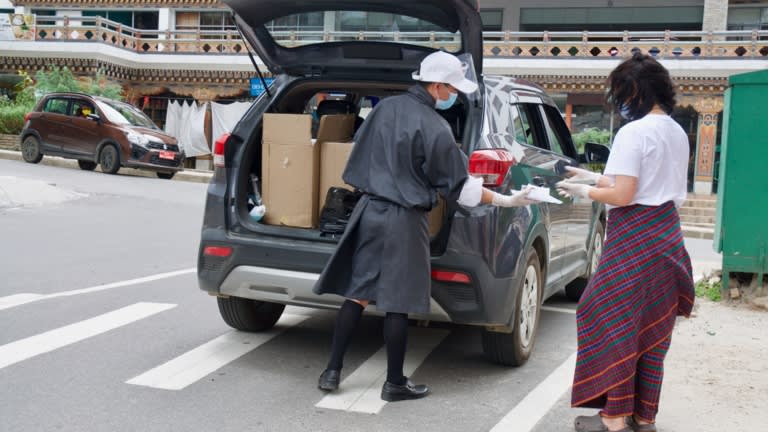 A Bhutan Duty Free delivery in Thimphu on Aug. 20. (Photo by Phuntsho Wangdi)

Bhutan's first anti-tobacco law, passed in 2010, attracted huge controversy because of its severe prison terms: three to five years for anyone with more than the quantity allowed. A 23-year-old monk caught with several packs of tobacco was the first to be imprisoned. The act has been amended twice following public outcry, increasing the permitted quantities and reducing the penalties.

While it is rare to see people smoking openly in Bhutan, and most places have the mandatory no-smoking signs and designated smoking areas, tobacco use has gone up in recent years. According to a Health Ministry survey done in 2019, cigarette smokers had increased to 9 percent from 6 percent in 2014, and they smoked 113 a month, up from 98.

Bhutan's worst fears of cross-border transmission happened last week when a worker handling goods coming from India tested positive in the border town of Phuentsholing. Until then, all the 100-odd positive cases had been of quarantined people returning from abroad. No deaths have been recorded so far.

As the country went into nationwide lockdown on Aug. 11, the government announced that it would organize volunteers to drop off essentials at homes, including tobacco, to help keep people indoors.

Between Aug. 14 and 19, the duty-free outlet in Thimphu received more than 10,000 tobacco orders from across the country and delivered products worth 50 million ngultrums ($670,000).

Sonam Choden, a housewife who lives in the capital, was one of the customers. She ordered 20 packs of honeydew cigarettes for her husband, paying 5,350 ngultrums. They were delivered the next day. "Hubby's the happiest man today," she texted.