President holds call with Turkey's Erdogan; first trip abroad will be to UK and Belgium U.S. Trade Representative Katherine Tai testifies before the Senate Appropriations Subcommittee on Commerce, Justice, Science, and Related Agencies during a hearing on the proposed budget for fiscal year 2022 for the Office of the USTR.   © Reuters
Nikkei staff writersApril 14, 2021 07:37 JSTUpdated on April 29, 2021 03:25 JST | North America
CopyCopied

WASHINGTON/NEW YORK -- U.S. President Joe Biden's first 100 days in office, marked by the coronavirus, reforging alliances and climate change, will come to an end on Thursday.

For more on the start of the Biden era -- and the Asian angle -- read our in-depth coverage:

Biden puts Japan at the center of US policy in Asia

Key US lawmaker calls for more 'clarity' on Taiwan policy

Here are the latest developments during Biden's first 100 days in office:

11:00 a.m U.S. Trade Representative Katherine Tai answers questions on the phase one deal with China and other trade issues from eager lawmakers, as Biden's administration nears the end of its first 100 days.

The administration is still reviewing the deal, Tai says in testimony before the Senate Appropriations Subcommittee on Commerce.

While there has been "a lot of focus on the purchase commitments that China made as part of this agreement," the picture of Beijing's progress on the trade deal is "more nuanced than you might think by just looking at the trade data," she says, pointing to issues including intellectual property protection.

"We are very focused on this agreement -- which is the agreement that we have -- and testing its utility and maximizing our use of the tools that are included in this agreement," she says.

Tai also highlights the role her office played in the $1.8 billion settlement between South Korean battery makers LG Energy Solution and SK Innovation and the deal's significance for the American electric vehicle industry.

"The settlement is the type of trade policy that I believe we need," she says in her opening statement. "It supports a larger strategy for creating jobs and investing in innovation and manufacturing leadership."

2:40 p.m. Biden has spoken by phone for the first time with Turkish President Recep Tayyip Erdogan.

"The leaders agreed to hold a bilateral meeting on the margins of the NATO Summit in June to discuss the full range of bilateral and regional issues," according to a White House readout 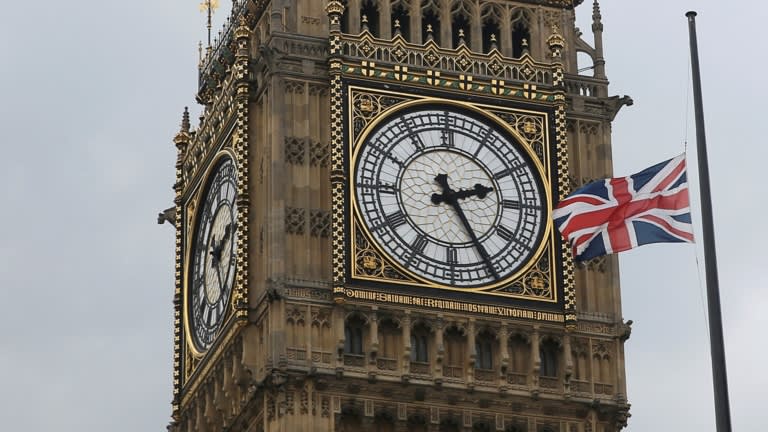 U.S. President Joe Biden will travel to the U.K. and Belgium in June for his first overseas trip since taking office.   © Reuters

11:37 a.m. Biden will travel to the U.K. and Belgium in June for his first overseas trip since taking office, the White House says.

The trip aims to highlight the president's "commitment to restoring our alliances, revitalizing the transatlantic relationship, and working in close cooperation with our allies," White House press secretary Jen Psaki says in a statement.

Biden hosted a two-day virtual climate summit where, on Thursday, he announced a goal of slashing U.S. net greenhouse gas emissions 50% to 52% by 2030 compared with 2005 levels.

In their meeting at the White House, Biden affirmed his "ironclad support" for the U.S.-Japan alliance.

Vowing to work together "to take on the challenges from China" and to ensure that the future of the Indo-Pacific is "free and open," the president said in a joint news conference that the U.S. and Japan will "prove that democracies can still compete and win in the 21st century."

Suga, for his part, said that the two leaders agreed to "oppose any attempts to change the status quo by force or coercion in the East and South China seas," taking a dig at China.

In a statement issued after the meeting, the two men underscored "the importance of peace and stability across the Taiwan Strait" and encouraged "the peaceful resolution of cross-Strait issues." 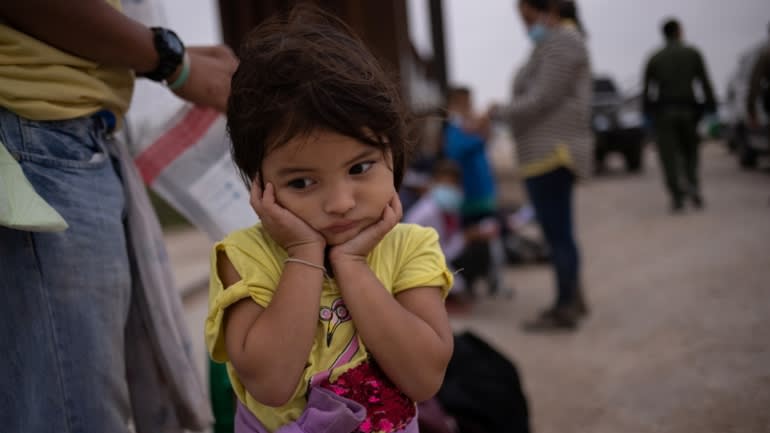 A two-year-old asylum-seeking migrant girl from Honduras to be transported by the U.S. Border Patrol.   © Reuters

4:30 p.m. In a surprise move, Biden signs an order to retain the annual cap of 15,000 refugees allowed in the U.S. that was set by his predecessor, Donald Trump.

After criticism, however, the White House says that the cap would eventually be raised.

Some analysts speculate that the decision is aimed at containing the political fallout from the flood of migrants at the Mexican border. Immigration activists and members of Democratic Party harshly criticize the move.

"Biden promised to welcome immigrants, and people voted for him based on that promise," Alexandria Ocasio-Cortez, the left-leaning Democratic House member, says on Twitter.

In response to the criticism, the White House says a final figure would be set by May 15. However, the plan to raise the number to 62,500 seems unlikely, White House spokeswoman Jen Psaki says.

6:00 p.m. The White House announces Erika Moritsugu, a former Congressional aide to Sen. Tammy Duckworth, will be deputy assistant to the president and Asian American and Pacific Islander senior liaison.

"Moritsugu has diverse and deep experience on Capitol Hill and within governmental agencies," the White House announcement said. "Moritsugu will bring her experience and expertise to the Biden-Harris Administration where she will be a vital voice to advance the President and the Administration's priorities."

The White House had promised to add a senior level Asian-American Pacific Islander liaison after Duckworth and Sen.Mazie Hirono threatened to veto all other Biden nominees if the community was not well represented in the new administration. Recent hate crimes against people of Asian descent heightened the need for a liaison.

Born in California and raised in Hawaii, Moritsugu is currently vice president at the National Partnership for Women and Families, where she leads the Economic Justice team and Congressional relations. 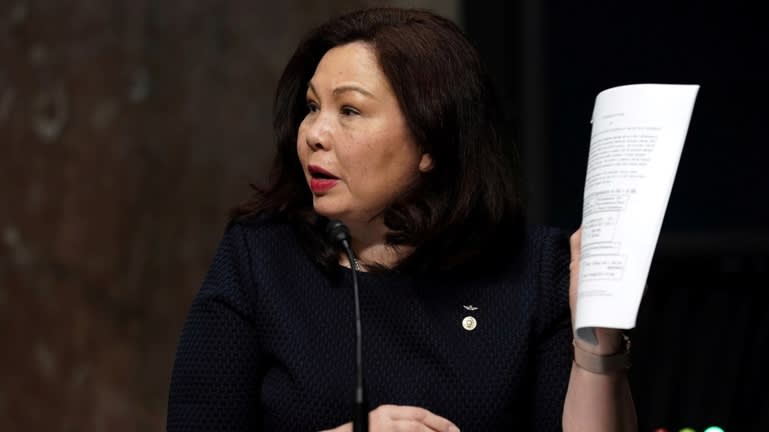 3:30 p.m. Biden will withdraw the last remaining 2,500 troops from Afghanistan in the coming months, U.S. officials tell the media, with a complete withdrawal expected by or before the 20th anniversary of the 9/11 attacks. 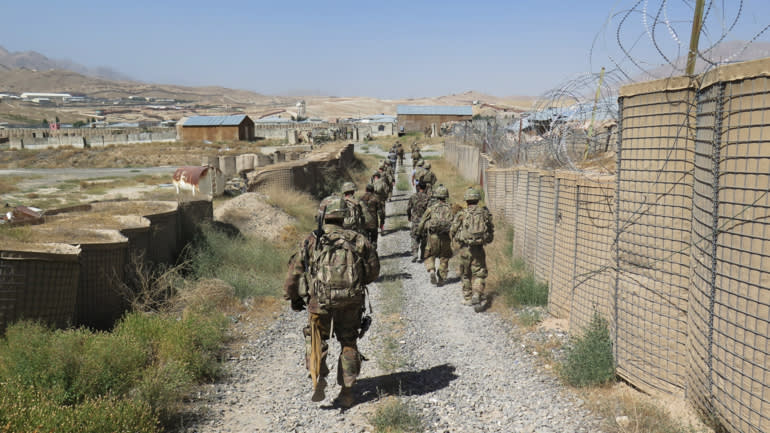 Biden will formally announce his decision on Wednesday.

This move represents a significant departure from the approach that has guided the U.S. presence in Afghanistan for the past 20 years.

"There is no military solution to the problems plaguing Afghanistan, and we will focus our efforts on supporting the ongoing peace process," a senior administration official says.

3:00 p.m. Biden sends an "unofficial" delegation to Taiwan, according to a Reuters report quoting the White House, in a show of the U.S.'s commitment to the island's democratic institutions.

The entourage includes former U.S. Senator Chris Dodd along with Richard Armitage and James Steinberg, both former deputy secretaries of state. The group will meet with Taiwanese officials in keeping with "a longstanding bipartisan tradition of U.S. administrations sending high-level, unofficial delegations to Taiwan," according to a White House statement.

The announcement comes on the heels of the State Department issuing new guidelines Friday that will allow U.S. officials to meet more freely with their Taiwanese counterparts. 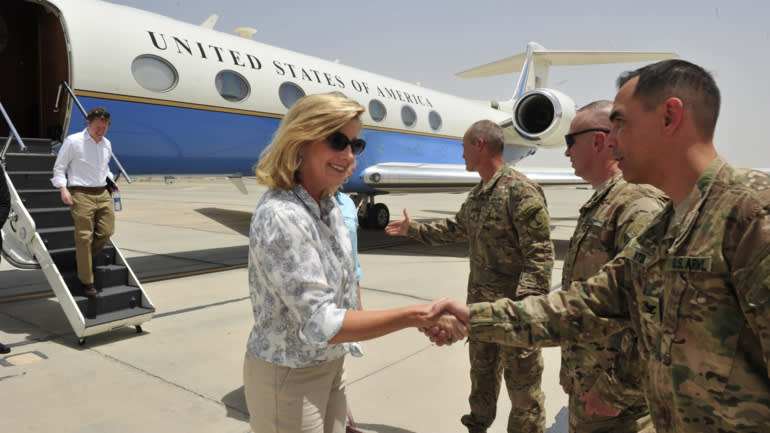 Christine Wormuth, then the U.S. undersecretary of defense for policy, is greeted by officers during a visit to Afghanistan in July 2015. (Photo courtesy of the U.S. Army)

4:00 p.m. Biden announces that he will nominate Christine Wormuth as the Secretary of the Army, which could make her the first woman to hold that role.

Wormuth previously served as the undersecretary of defense in charge of policy during the Obama administration, the third-most senior civilian position in the Pentagon.

She was also the senior director for defense policy for the National Security Council. In that capacity, she helped craft policy that began rebalancing the U.S military toward the Indo-Pacific region.

To catch up on earlier developments, see the previous edition of latest updates.