CEO in the news: Fujifilm's boss is ready to make Xerox acquisition pay off 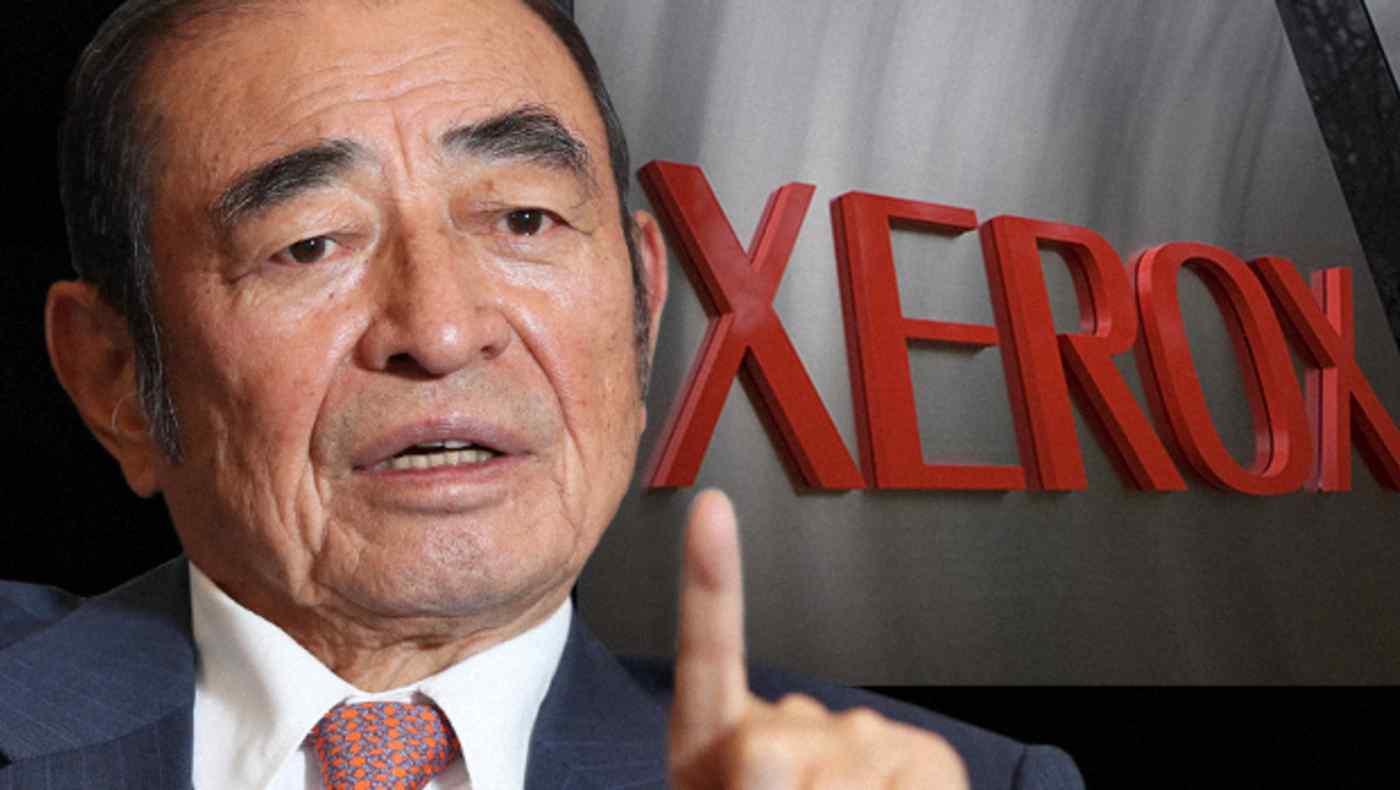 TOKYO Japan's Fujifilm Holdings reached a deal on Jan. 31 to take majority control of Xerox, its decades-long U.S. partner. The move achieves Fujifilm's long-held goal of making and selling office equipment throughout the world under one roof.

For Shigetaka Komori, Fujifilm's 78-year-old chairman and CEO, the move was something he thought he would never be able to accomplish in his lifetime. About a decade ago, a Nikkei reporter heard Komori lament, "If I were 10 years younger, I would have considered buying Xerox." On Feb. 1, the Nikkei Asian Review caught up with Komori, who is also a close friend of Prime Minister Shinzo Abe. Komori's remarks in the interview show confidence as well as concern about taking over the storied American company:

"The New York Times and The Wall Street Journal mention that an American corporate icon is being acquired by a Japanese company," Komori said. "But neither of them described it in any negative way. The tone of their articles is one of inevitability or of looking to Fujifilm for innovation."

Japanese corporate managers remain sensitive to American public opinion about acquiring well-known U.S. companies, especially one that so penetrated the lives of Americans that its name became a verb. Japan Inc.'s headline-making acquisitions of Columbia Pictures and Rockefeller Center in the 1980s fueled a trade war between the two countries.

Komori has reason to worry about a backlash. The deal was announced the day after President Donald Trump's first State of the Union address, in which he called for putting America first, fixing "bad trade deals," protecting American jobs and rebuilding U.S. industry. Being a personal friend of Abe might also add to Komori's concern.

"We have about 300 subsidiaries, with 177 located overseas. We have been managing all of them. But this is the first time we have acquired a large corporate icon," he said. "Managing people who are very proud could be a challenge. ... Japanese often hesitate [to say what needs to be said]. You have to have strength."

Japan's corporate history is littered with stories about foreign takeovers going awry. The most recent example may be Toshiba's disastrous acquisition of U.S. nuclear-plant maker Westinghouse Electric, whose collapse last March brought the venerable Japanese industrial group to the brink of its own bankruptcy.

Komori, who has led Fujifilm for 18 years, is confident of commanding the respect of Xerox employees.

"In a capitalist economy, you make money by spending it," he said. "Paper profits are unusable, no matter how big they are. ... The latest scheme will allow us to take control of Xerox without spending a penny. In exchange, we give up a 75% stake in Fuji Xerox."

Fujifilm will "spend" the unrealized profit on its 75% stake in their 56-year-old joint venture, Fuji Xerox -- estimated to be worth 671 billion yen ($6.1 billion) -- to acquire 50.1% of Xerox, accomplishing the acquisition without a cash outlay.

But the deal can be looked at as Fujifilm ceding to Xerox its control over the rapidly growing Asia-Pacific region for a 50.1% stake of the U.S. company. "About 50% of [new Fuji Xerox] profit will belong to outsiders," one analyst said. "It is also unclear if Fujifilm can integrate a giant like Xerox smoothly." Ryosuke Katsura, senior analyst at SMBC Nikko Securities, said in a research note: "We think the absence of a cash outflow will be viewed positively," adding that "the stock market had harbored concerns on a cash outflow of 1.2 trillion yen to 1.3 trillion yen if Xerox had embarked on a tender offer."

"The worst-case scenario of a merger between Xerox Corp. and HP has been avoided," Katsura added in the note.

NOT DONE YET Komori had explored various possibilities of unlocking those gains, including taking Fuji Xerox public. A digital camera from Fujifilm

"I'm not worried about Carl Icahn," he said about the activist investor. "Xerox will be paying a special cash dividend. With his 10% stake, he will be receiving close to 30 billion yen. That will probably satisfy him. ... I am happy to meet with Icahn."

The deal calls for the U.S. company to pay $2.5 billion in cash dividends to current shareholders. Komori thinks this will go a long way toward winning over Icahn, who is Xerox's largest shareholder, with a 9.7% stake. A functional cosmetics product from Fujifilm

Icahn and fellow activist Darwin Deason have been campaigning for the ouster of Xerox CEO Jeff Jacobson. Some speculate that the duo might conclude that Fujifilm's offer is too low and decide to launch a campaign to block the plan to combine Fuji Xerox with Xerox.

Komori was confident about obtaining support of the existing shareholders, including Icahn.

"This deal is a game changer. ... The combination will create synergies and produce cost savings worth $1.7 billion a year," he said. "It will become much easier to increase market share. ... No company is perfect. Its payroll becomes bloated over time. All organizations need a clean-up from time to time."

As the business led by Komori expands, the need to improve oversight has become a priority. The issue crystallized last year when accounting irregularities came to the surface at Fuji Xerox's Australia and New Zealand subsidiaries, an incident that forced Fujifilm to replace most executives with those of its own.

The latest deal is aimed at further simplifying the complex partnership involving Fujifilm, Xerox and their Fuji Xerox joint venture, allowing them to develop products much faster at lower costs and distribute them to markets around the world.

Under the current arrangement, Fuji Xerox's operations are restricted to the Asia-Pacific region, and those of Xerox to Europe and North America. The combination will allow them to operate as one company and unify product development and marketing.

Cost-cutting is another important task for Komori. Fuji Xerox, for instance, had an operating profit margin of 7.7% in the year through March 2017, compared with 9.7% for rival Canon's office equipment business in the year to December 2017. In the eyes of Komori, Fuji Xerox has been too reliant on the Xerox brand and "lacks sufficient cost consciousness." He has already taken measures to rectify Fuji Xerox's trend toward high costs, and is poised to step up further reforms after the merger with Xerox.

"Demand for copiers won't disappear soon," Komori said. "There will be demand from emerging economies, such as China and India as well. But this is not a market that will grow 5% a year. Only the strongest company will be able to survive."

DOUBTS OF SUCCESS The combination, if approved by U.S. regulators and Xerox shareholders, will create a copier and printer maker on the same scale as industry leader HP, while eclipsing Fujifilm's domestic rivals Canon and Ricoh.

Not everyone is convinced about the merits of the deal, however. Moody's Investors Service, for one, placed Fujifilm's A1 debt rating on review for possible downgrade.

"The review for downgrade reflects the potential that Fujifilm Holdings' business profile will weaken, due to its larger exposure to the declining document business," Moody's said.

Fujifilm plans to cut 10,000 jobs at the Asia-Pacific joint venture. Komori took pains to stress that layoffs do not involve the U.S. company.

"I'd like to see a stronger product lineup in the life science segment," he said. "We are looking to take market leadership in the field of regenerative medicine."

Fujifilm at one time had been a simple maker of photographic film trying to challenge the dominance of Eastman Kodak, another American corporate titan. As demand shifted away from film, however, Fujifilm plowed heavily into research and development and branched out into new fields. Kodak filed for bankruptcy in 2012.

The acquisition of Xerox is a step away from recent efforts by the company to diversify into areas of growth, such as pharmaceuticals and cosmetics, as offices in developed markets are cutting down on paper documents. Taking control of Xerox will increase the Japanese company's exposure to office equipment, which accounted for two-thirds of the combined sales of Fujifilm and Xerox in fiscal 2016. Komori stressed that his company is not focusing on one or the other, but that it is pursuing growth in all areas. Still, he acknowledged that work remains to be done.

"Of the two things I wanted to do, one was taking control of Xerox," he said. "I cannot tell you what the other is. ... [The agreement with Xerox] is like hitting a 250-yard drive shot. You still have to put the ball on the green and then into the hole, hopefully with one putt."

READY TO FIGHT Komori is an athlete. He played American football in college and now plays golf with other business executives, and sometimes with Abe, a fellow conservative.

Komori had his worldview shaped in Manchuria, where he was born in 1939. He was 5 when Japan was defeated in World War II. His family fled Manchuria amid great confusion. In a magazine interview he once gave, he said: "It's very miserable to be defeated. ... Life is a battle, between countries and between companies. ... It is a fight against hardship and a fight against your own weakness." He graduated from the University of Tokyo in 1963, having played on the school's American football team, the Warriors. In a message he later contributed to the team's website, Komori said, "Like in football, strategy, teamwork, speed, power and guts are important in business." Those who are afraid to fight, he said, perish.

His aggressiveness and conservative worldview brought him closer to Abe.

After Abe resigned from his first term as prime minister in 2007 -- only one year after taking office -- Komori organized a group of business leaders to support Abe as he wandered the political wilderness.

Earlier that year, Komori was appointed by Abe to the board of public broadcaster NHK and served as chairman of its management committee, channeling his conservative views into the organization that was viewed by some as leaning too liberal.

He is already thinking about postponing his retirement, citing the need to see through the integration between Fujifilm and Xerox.

"Will the integration be complete in two to three years? It's more likely three to four years," he said in the interview. "I thought I could retire by 80, but I'll have to be around a little longer."