A local points to a swath of land where the now-defunct Second Thai-Burma Railway cut through the southern Thai province of Ranong.
YASUMASA SHIMIZU, Nikkei staff writerDecember 2, 2015 17:00 JST | Japan
CopyCopied

BANGKOK -- The Kra Isthmus, the narrowest part of the Malay Peninsula in southern Thailand, is drawing attention as a potentially important gateway for transporting goods across Southeast Asia ahead of the planned year-end launch of the ASEAN Economic Community.

The creation of the AEC is certain to expand trade in the region, and building a transport shortcut linking the Andaman Sea with the Gulf of Thailand would help goods move more efficiently. Calls are growing for reviving a long-defunct railway built across the isthmus by the Japanese military during World War II.

"I've long dreamed of seeing another railway built here," said Jeaw Khaiaree, an 86-year-old man living in the southern province of Ranong. He said he helped the Japanese military survey the land for the Kra Isthmus Railway, also known as the Second Thai-Burma Railway.

The narrowest part of the Malay Peninsula -- between the ports of Chumphon on the Gulf of Thailand and Ranong along the Andaman Sea -- is just 50km across. From the Port of Ranong, boats can travel up the Kraburi River to Kawthaung, a town on the southernmost tip of Myanmar.

In addition to the original Thai-Burma Railway, which ran through central Thailand, the Japanese military built the Kra Isthmus Railway to transport ammunition and other military supplies from Japan to Burma -- now called Myanmar -- and other destinations during the war. Some 30,000 workers were mobilized for the project, which took just six months to complete.

Decades later, the area is once again in the spotlight, as the impending economic integration of the Association of Southeast Asian Nations is expected to increase the movement of goods in the region.

The Port of Ranong is ideally situated for exporting foodstuffs and other goods to a rapidly developing Myanmar, Ranong Gov. Suriyan Kanchanasilp said. 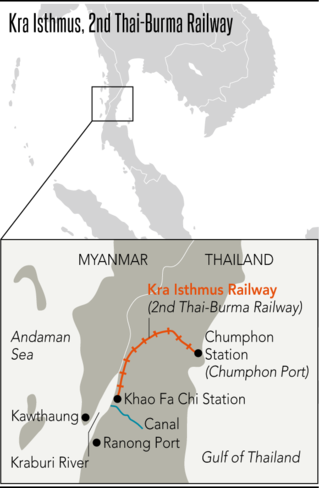 At present, most goods shipped by boat to Myanmar originate in Laem Chabang Port, near Bangkok, and arrive via Singapore. That trip can take one to two weeks. A transport artery across the Malay Peninsula would greatly shorten that time by lopping over 1,000km off the total shipping distance.

One approach already being taken is to build larger, better roads there. The provincial government has begun a project to construct a four-lane road across the isthmus by 2017. But the governor says that alone is not enough.

The idea of building a railroad has popular public support. One reason for that is because the pre-existing path carved out by the old railway means costs would be held down. One estimate puts the figure at 7 billion baht ($198 million). The provincial government has submitted a railway plan for approval by the central government.

Another idea is to carve out a canal so that goods could be shipped directly across the peninsula without having to be unloaded. It would also mean tankers could sail from the Middle East to Japan and other destinations without having to make the more time-conuming journey through the Strait of Malacca.

The concept of building a canal there has been kicked around since the 17th century. More recently, the idea has failed to gain traction due to opposition from neighboring countries -- especially Singapore, which does not want to lose shipping business.

Despite tapering to a svelte 50km at its narrowest point, the Kra Isthmus is bumpy terrain and would make for tough, costly digging. Building a canal there would produce a bill estimated at $24 billion to $32 billion, a sum the Thai government would probably balk at.

More economically realistic would be to build a railway along with the four-lane roadway. But with Thailand's military-led government cutting back on infrastructure spending, that may be a tall order. The Ministry of Transport has already expressed skepticism, with an official there questioning whether the project's returns would justify its cost.

After being completed in December 1943, the Second Thai-Burma Railway operated for less than 18 months before being destroyed by Allied air raids. Although seven decades have since passed, proponents of reviving the line will probably have to keep waiting.