The president reaches out to Samsung and big companies SEOUL -- South Korean President Moon Jae-in appears to be rethinking his relationship with the country's powerful businesses interests -- which he has characterized as the "deep-rooted evils" of the country -- as he looks for ways to boost employment.

On a trip to India on July 9, Moon visited a Samsung Electronics mobile phone plant, and for the first time met with company Vice Chairman Lee Jae-yong. The meeting with the de facto leader of the country's largest conglomerate raised the question of whether it signaled a change of heart for Moon, and a newfound desire to improve his relationship with business.

Moon has thus far distanced himself from the powerful business conglomerates, or chaebols, which he blames for a culture of corruption and influence-peddling that had built up over many years as a result of cozy ties between politicians and business.

At the July 9 meeting, which took place at a ceremony for a new Samsung building in the northern state of Uttar Pradesh, Lee greeted Moon with a deep bow.

The Moon administration sees Samsung as part of the "evils" that plague South Korea. Lee was found guilty in a case in which he was alleged to have provided illicit funds to a friend of impeached and arrested former President Park Geun-hye. An appeals court affirmed the verdict while releasing him from prison with a suspended sentence. The case is headed to the Supreme Court for a final appeal.

When Moon met Lee, he ran the risk of raising the eyebrows of the South Korean public. Ahead of the meeting, opinions were divided among officials in the presidential Blue House on whether it was a good idea.

Moon's support base is largely comprised of citizens dissatisfied with the long-standing cozy ties between politicians and business. Many of his supporters had staged large protests leading to Park's impeachment. Moon won the presidential election in May 2017 on a pledge to root out the "evils."

The Blue House explained the recent meeting in India by saying it was merely a visit to an overseas location of a South Korean company. But the risk of a backlash from Moon's supporters was still considerable.

And that isn't the only sign that Moon has had a change of heart toward business.

On July 2, the president stressed to Blue House officials the importance of strengthening communication with businesses, telling the officials to schedule regular visits to companies. A senior executive with a major South Korean conglomerate said the government promptly started contacting his company, asking executives to meet with Moon

Since taking office in May last year, Moon has staunchly remained on the side of workers while appearing to give business the cold shoulder. He appointed Kim Sang-jo, a well-known economist otherwise known as the "chaebol sniper," as chairman of the Fair Trade Commission. Conglomerates have been pressured to reform their opaque governance structures. 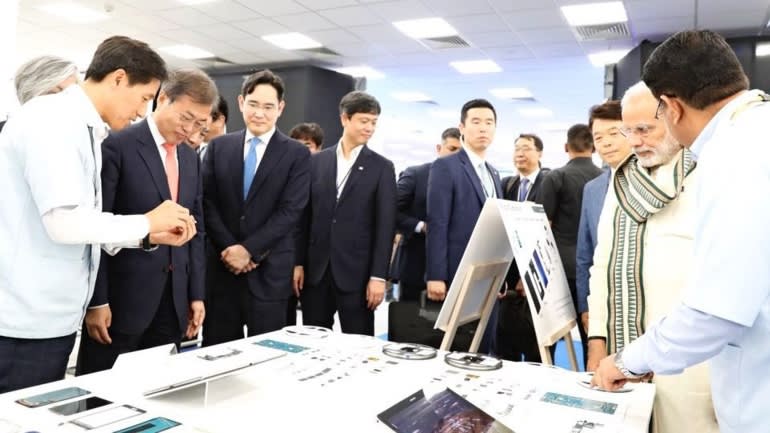 While Moon has not had much contact with business leaders, he did invite the leaders of major conglomerates to the Blue House for an informal chat over beer last summer.

But nothing substantive came from the chat, and no follow-up events have been held, said a frustrated executive with a company that had someone at the chat.

Nor did Moon attend the New Year party of business executives that his predecessors customarily attended. Business leaders were disappointed.

Moon's recent about-face appears to have been prompted by the lack of tangible progress in his agenda of seeking income-driven economic growth. The policy aims to lift household incomes through job creation and wage rises to drive growth.

In the five consecutive months to June, the number of people in employment grew by only about 100,000 from a year ago, a pace about as slow as that during the global financial crisis nearly a decade ago. On July 12, the Bank of Korea revised down its economic growth forecast for 2018 to 2.9% from 3%.

The Moon administration has been showing its frustration.

A person at one major conglomerate said Moon may have realized he needs cooperation from businesses if he wants to spur employment. A landslide victory in local polls by the ruling party in June was the first test of Moon's government in the year since its inauguration. It may have emboldened the president to act without worrying too much about public perception.

During his visit to India, in a five-minute, unscheduled talk with Lee, Moon asked the Samsung leader to increase investment and employment in South Korea. Coming with all the authority of the president, it was a weighty request that the company could hardly ignore.

Local media subsequently reported that Samsung may respond with a potential 100 trillion won ($89 billion) investment, and announce a new hiring plan, though no such plan has been officially announced.