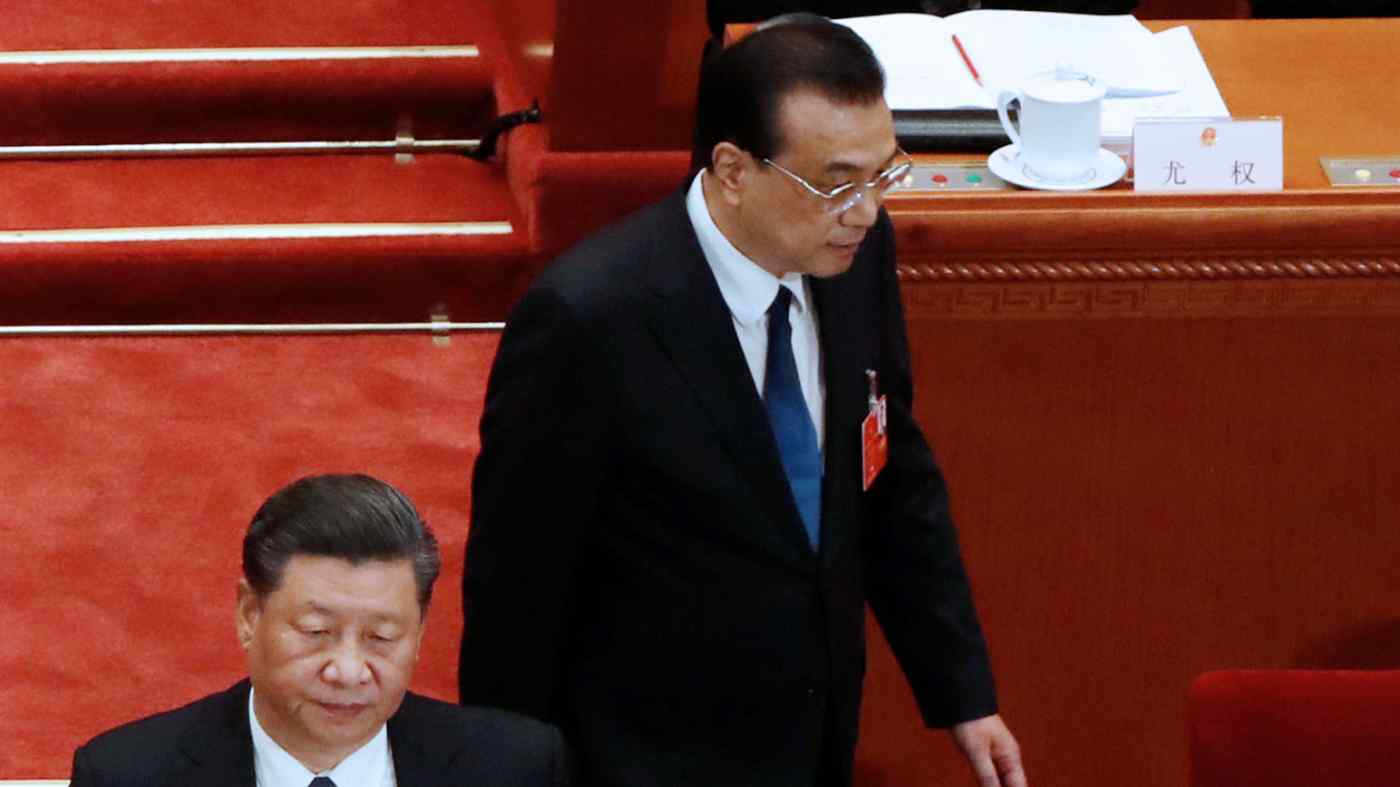 Chinese Premier Li Keqiang returns to his seat next to President Xi Jinping after announcing that due to "uncertainty regarding the COVID-19 pandemic," the government would not set an annual economic growth target for the first time in decades.    © Reuters
CK TAN, Nikkei staff writerMay 22, 2020 10:26 JSTUpdated on May 22, 2020 15:51 JST | China
CopyCopied

SHANGHAI -- Chinese Premier Li Keqiang did not announce an economic growth target for this year, marking the first time in three decades the government has skipped setting that goal in its annual blueprint.

In a work report presented on Friday in Beijing at the delayed start of the annual session of the National People's Congress, China's legislature, Li said the government foresees its 2020 budget deficit rising to more than 3.6% of gross domestic product, up from 2.8% last year.

"We have not set a specific target for economic growth this year because our country will face some factors that are difficult to predict in its development due to the great uncertainty regarding the COVID-19 pandemic," Li told nearly 2,900 delegates, including President Xi Jinping, during his hour-long televised address.

Li said authorities plan to issue up to 4.75 trillion yuan ($668.17 billion) in bonds to respond to the coronavirus pandemic and sustain economic development and social stability through infrastructure development and other programs as the country works to recover from weeks of lockdown earlier this year.

Julian Evans-Pritchard, senior China economist for research company Capital Economics, said in a client note that this plan would mark the country's first with a budget deficit target of above 3%, "which was previously seen as an upper limit."

"The annual budget points to fiscal stimulus this year at least on par with that following the global financial crisis," he said.

Li set a priority on stabilizing employment and supporting small and medium-sized enterprises. Authorities will aim to keep the urban unemployment rate, which officially reached 5.9% in March, below 5.5%. This would be above the 5% target of the previous few years.

Chinese stocks, which had been on a rising trend over the past month, declined during trading Friday. The Shanghai Stock Exchange Composite Index closed the day down 1.9%.

SMEs are set to enjoy 500 billion yuan of tax breaks as well as forbearance on loan payments through next March. Li said priorities for the new round of infrastructure spending would include building out next-generation telecommunications networks and adding charging facilities to support the wider use of electric vehicles.

China usually discloses its annual economic growth target in the premier's work report. The abandonment of the annual growth target seems to confirm the leadership's recognition that it may not be able to achieve a long-standing target of having doubled real GDP between 2010 and 2020.

State media, however, said Friday that official long-term development goals for this year remain intact. Before the pandemic, China appeared to have a significant chance of reaching the GDP milestone.

China's economic slowdown accelerated over the past two years amid the trade war with the U.S. then turned into actual contraction in the first quarter due to the COVID-19 lockdown; for the period, economic output shrunk 6.8% from a year before. Some economists have predicted output growth could be negative for the year as a whole. Analysts for Fitch Ratings in a note published on Thursday forecast annual growth of 0.7%.

"China's economic recovery from the coronavirus pandemic remains uneven, despite initial optimism around the prospects for a sharp rebound following the stabilization in confirmed cases and gradual unwinding of lockdown measures since early March," Fitch said. "Consumption trends remain anemic, probably a result of the negative shock the pandemic has had on household incomes and employment."

Recovery has been slowed as the spreading pandemic has depressed overseas demand for many Chinese exports and disrupted commercial transport links.

"We think the government [is] right not to be too ambitious about the speed of the rebound and even with sizable stimulus, only expect output to return to its pre-virus trend around the middle of next year at the earliest," Evans-Pritchard said. "(But) we do think that China will stage a faster recovery than most other major economies."

Bruce Pang, an economist with China Renaissance Securities in Hong Kong, said in a note to clients after Li's speech, "We still expect a recovery from the second half of 2020 driven by pent-up demand and policy easing, and believe China should have more flexibility and room for policy maneuvers."

Li said China would remain committed to welcoming foreign trade and investment, pledging to reduce the list of sectors from which overseas companies are barred from participation and to introducing new free trade zones.

Overall, the new annual budget includes 24.78 trillion yuan in spending, or 3.8% more than last year, against a projected revenue drop of 5.3% to 18.02 trillion yuan.

NPC spokesman Zhang Yesui said on Thursday that military spending has been kept at about 1.3% of GDP for several years, which he described as lower than many other countries. Even so, the Stockholm International Peace Research Institute in a report last month said that China last year accounted for 14% of global military expenditure, behind only the U.S.

This year's NPC session was originally scheduled to begin March 5 but was postponed because of the pandemic. Delegates will deliberate over the next seven days on items such as the national budget, economic stimulus measures, a new civil code, a national security law for Hong Kong and the country's first comprehensive laws governing privacy protection, divorce and sexual harassment.