With eye on US, Beijing is building aircraft carriers and long-range missiles BEIJING -- China's message in boosting its military budget again this year is clear to international observers.

"Listen, we are China, a superpower. Don't mess with us," said Siemon Wezeman, a senior researcher in the Stockholm International Peace Research Institute's arms and military expenditure program, of the 7.5% increase.

In boosting its military prowess, Beijing seeks to deter the U.S. from further challenging its extensive claims in the South China Sea and to forestall moves by the government of Taiwan to formalize the island's independence from the mainland.

"The intensifying strategic competition between China and the U.S. calls for more resources to be directed at military capabilities and preparedness to deter conflict," said Adam Ni, who researches China security issues at Macquarie University in Sydney.

According to the government budget unveiled at the National People's Congress on Tuesday, Beijing will spend 1.19 trillion yuan ($178 billion) on the military this year. Overall spending is to rise 6.5% while officials have targeted a gross domestic product expansion of between 6% and 6.5%. The defense budget was raised 8.1% in 2018.

Wezeman and others believe China's actual military spending is as much as 50% higher than the formal budget, noting that it omits some spending on weapons systems and benefits for troops. 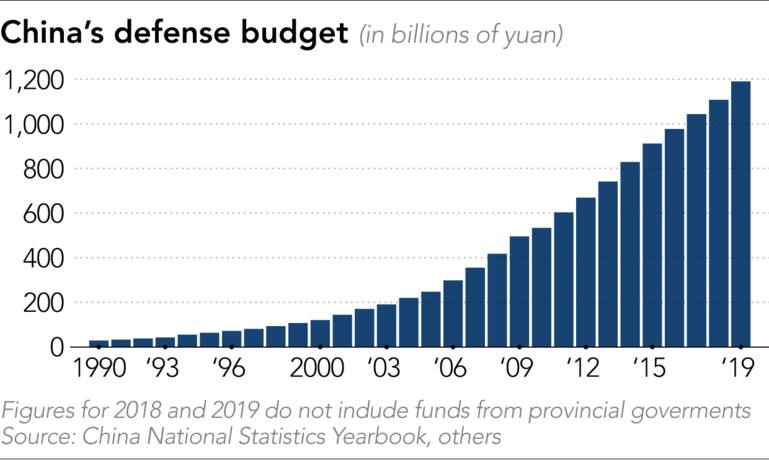 Chinese Premier Li Keqiang told the legislature on Tuesday: "In the year ahead, we will continue to... build stronger armed forces for the new era. We will strengthen them through reform, science and technology."

Some observers expect Beijing to show off two or three of its carriers at an international naval review scheduled to take place off the northeastern port of Qingdao in April.

China also reportedly tested a new submarine-launched ballistic missile, dubbed the JL-3, last November. It is understood to be able to carry nuclear warheads and travel as far as 12,000 km -- far beyond the 8,000 km range of its longest range submarine missile currently deployed.

Aside from advanced weapons systems, China is also investing heavily in modernizing the structure of People's Liberation Army, the world's largest military force.

A key priority is the better integration of land, air, sea and other forces as well as expanding capabilities for information and space warfare. Officials are also keen to improve veterans' benefits after repeated protests in recent years by retired soldiers.

"One can be quite certain, the hike in the defense budget is related to the need for the stronger promotion and defense of the [military's] IT infrastructure," said Phar Kim Beng, founder of consultancy Echo Strategic Insight in Kuala Lumpur. 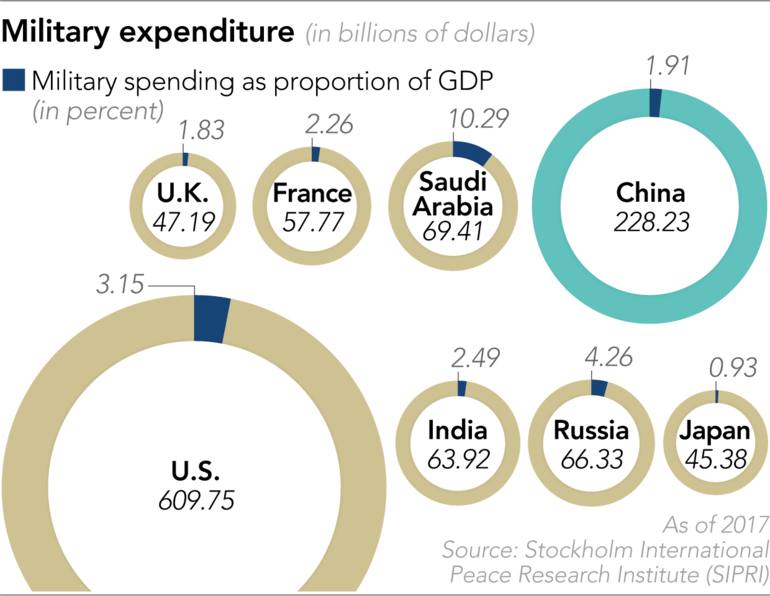 "I believe that when it comes to whether a country poses a military threat to other countries, the key is the country's foreign and defense policies, not how much its defense budget increases," he said.

Dreyer noted that Chinese military media have recently carried a number of articles focused on the deficiencies of the military.

"While every country feels that there's room for improvement, it's almost as if the Chinese government wants the world to believe that there's nothing to be afraid of," she said.

While President Xi Jinping's anti-corruption campaign has seen several of the country's highest ranking officers removed and punished, she said of the new budget that "much will also be wasted in corruption."

Although the absolute increase in the size of this year's official budget marks a record, Ni said that Beijing is adjusting the reality of the country's economic slowdown. "The era of double digits spending growth is over," he said.