With $6tn owed off the books, local governments grapple with public works Delegates enter the Great Hall of the People to attend the opening session of the National People's Congress in Beijing on Tuesday. The government pledged to spur the economy.   © Reuters
YUSHO CHO and TAKASHI KAWAKAMI, Nikkei staff writersMarch 6, 2019 05:36 JST | China
CopyCopied

SHANGHAI/BEIJING -- As China scrambles to sustain economic momentum with the help of aggressive fiscal stimulus, many heavily indebted local governments face the prospect of digging themselves even deeper into "hidden" debt.

"We must be fully prepared for a tough struggle," Premier Li Keqiang said on Tuesday on the opening day of the annual National People's Congres, the country's parliament. Delivering the government work report, the premier expressed Beijing's commitment to preventing a downward economic spiral and maintaining at least 6% growth.

Li promised massive tax cuts to shore up manufacturing and other sectors, as well as heavy public spending to stoke growth, including housing investment.

Beijing's stimulus drive is pushing many municipalities to take on even more debt. Following years of debt-financed public investment, China's local governments already have borrowed as much as 40 trillion yuan ($6 trillion) off the balance sheets, according to one estimate.

The corrosive effects of such fiscal expansion are clear in Tengzhou, a city in coastal Shandong Province whose per-capita gross domestic product is about half that of Shanghai's.

"Move early, receive compensation early." This text appears in large characters and in vermilion paint on many brick houses and concrete block walls in the city's suburbs. It is intended to pressure residents to move out of their old houses quickly for a type of scrap-and-build redevelopment project known as penggai, or shack transformation. Painted messages in a Tengzhou redevelopment zone exhort residents to move soon to receive faster payment for their land in Shandong Province.  (Photo by Yusho Cho)

Parts of the area have become heaps of rubble, and heavy construction machinery is working to level the ground for redevelopment.

The Tengzhou redevelopment involves what amounts to the forced sale of land owned by the residents, with the projects overseen by local contractors and subcontractors with close ties to the local government. If residents opt to live in the new condominiums to be built on their land, they would pay any shortfall out of their own pocket.

This essentially serves as a scheme to acquire the money and land needed to rev up the economy through redevelopment projects imposed on residents. Such penggai projects have led to 6 million housing starts annually nationwide over the past several years.

Most Chinese municipalities suffer from chronic budget shortfalls. Land is one of the few remaining revenue sources for them, and they have become dependent on income from land sales. Local governments sold over 6.5 trillion yuan of land in 2018, representing nearly 40% of their overall revenue including tax receipts.

In regions where land is cheap, many local governments are strapped for money.

"We are really short of cash," said Liu Zhifeng, the Communist Party secretary of Wanfa, a village of about 1,500 people in the northeastern province of Heilongjiang. "We cannot even pay the salaries of village government employees."

In 2017, a local court ordered Wanfa to pay 123,907 yuan, or around $18,500, in construction costs to a man who filed a lawsuit seeking payment for his work done for the government. The village promised to pay in annual installments of 26,000 yuan, but has been unable to scrape up enough money to do so. 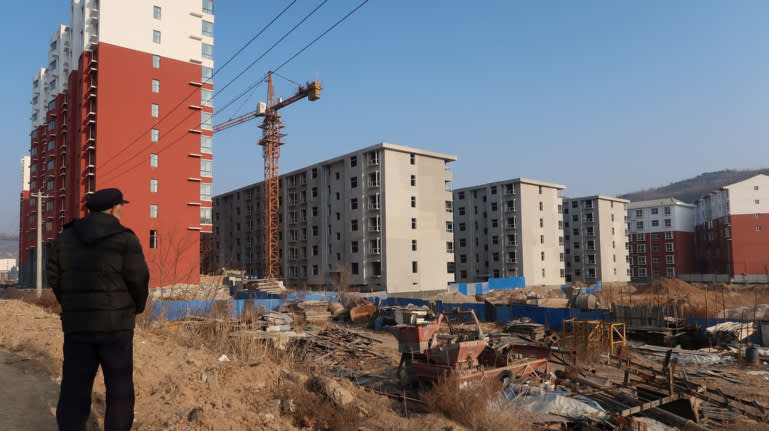 A shantytown in Yanan, Shaanxi Province, undergoes redevelopment. These types of projects have led to 6 million housing starts annually nationwide over the past several years.   © Reuters

Tales of municipal defaults are unfolding across China. As of the end of February, local governments were failing to make court-ordered debt payments in about 70 cases, according to the country's Supreme People's Court.

Earlier this year, Qinghai Provincial Investment Group, a government-backed borrower known as QPIG, failed to make good on a payment on a dollar bond it issued in and outside China, sending shock waves through the financial sector.

Even municipalities with stable finances could face trouble eventually because they must keep financing a growing list of public works projects in response to Beijing's call for stimulus spending.

Xuzhou, a major city in coastal Jiangsu Province, has cobbled together a package of public works projects that will cost an amount equivalent to 70% of the city's GDP. The Wanbailin District of Taiyuan, the capital of Shanxi Province, has unveiled a plan to spend an amount five times its GDP.

As China's economy grows, the amount of money needed to keep it humming balloons, and the growing public investment is boosting municipal debt. China's outstanding local government debt on the balance sheets totaled slightly over 18 trillion yuan at the end of last year.

Such hidden debts owed by local governments may have reached 35.92 trillion yuan at the end of 2017, according to China Chengxin Credit Rating Group, a Chinese credit rating firm. The company has yet to determine its estimate for 2018, but the total likely topped 40 trillion yuan, according to Wang Yuanhui, an analyst at the firm.

Many analysts predict these debts combined will reach 50 trillion to 60 trillion yuan by the end of 2019, compared with China's GDP of over 90 trillion yuan. In January, Chinese local governments issued more than 400 billion yuan in bonds to finance their spending. Beijing let them borrow such a large amount in order to keep financing infrastructure and other investments.

China's huge government debt load could sap the health of the world's second-largest economy, especially with the nation's social security spending bound to continue growing due to the aging population. In the first half of 2018, President Xi Jinping pledged to take steps to curb borrowing by local governments. But this policy goal appears likely to be put on the back burner.