BEIJING -- China's leaders have used the annual National People's Congress to allay fears over the economic slowdown, while keeping a hardened stance on foreign policy.

Amid ongoing trade tension with the U.S. and downward pressure on the domestic economy, Beijing announced a range of stimulus measures, including tax and fee cuts, during the 11-day legislative session that ended on March 15.

On foreign affairs, officials took a strong stance. They sought to justify ramped up military spending, and vigorously defended technology giants such as Huawei Technologies that are under attack from Washington.

The contrast between foreign and domestic polices illustrates the challenges President Xi Jinping faces as the People's Republic gears up for its 70th anniversary later this year. While the Communist Party maintains its grip on every aspect of society, it faces challenges of a very different nature to the past, and Xi and his senior officials have to demonstrate they are as capable as their predecessors.

Last year, all eyes were on Xi as he reinforced his hold on power by removing presidential term limits from the constitution. This year, sluggish growth and the trade war dominated the agenda.

Premier Li Keqiang announced tax cuts worth 2 trillion yuan (nearly $300 billion), and steps to aid ailing private companies as consumption and exports slow. The value-added tax rate for manufacturers will be cut to 13% from 16%, with the levy for transport and construction falling to 9% from 10%.

He admitted that the Chinese economy had encountered "new downward pressure" this year, and said stronger stimulus measures were needed to keep growth within its proper range. China has lowered its GDP growth target to between 6% and 6.5%. Chinese Premier Li Keqiang speaks at a news conference after the National People's Congress in Beijing closed on March 15. (Photo by Taro Yokosawa)

With the government focused on the most pressing issues, long-term economic reform were a less prominent topic at this year's NPC meetings, said Wang Dan, a Beijing-based analyst with The Economist Intelligence Unit.

"Li's report was designed to show that authorities were listening to concerns about high operating costs and a slowing economy," Wang said, adding that the emphasis on employment reflects government anxiety over labor market instability -- key to maintaining social unity in the world's most populous country.

Wang said stimulus measures were part of self-correction efforts after a campaign to reduce debts that forced numerous companies to close in recent years.

Despite the unprecedented size of the tax cuts, Wang doubts they will have much impact. "People tend to be less responsive to policy stimulus in an economic downcycle," she said.

While most economists consider the new stimulus package to be sufficient to achieve the economic growth target of 6% to 6.5% this year, some expressed doubt over whether Beijing will implement all of the measures announced if the trade war eases in the coming months.

Ding said the measures are aimed at relieving economic pressure from the trade friction in the short term, and are part of Beijing's preparations for the worst-case scenario.

"I do not think they will implement the stimulus measures in full," Ding said. "I think the government wants to continue its deleveraging campaign once it can."

People's Bank of China Gov. Yi Gang signaled the potential for further cuts in Chinese banks' reserve requirement ratios on March 10, but stressed there was much less room for easing than in previous years.

While Beijing hiked the quota for special government bond issuance by 60% this year, Finance Minister Liu Kun said the government would take action against local authorities that overstep controls the national government has put on off-balance sheet financing. 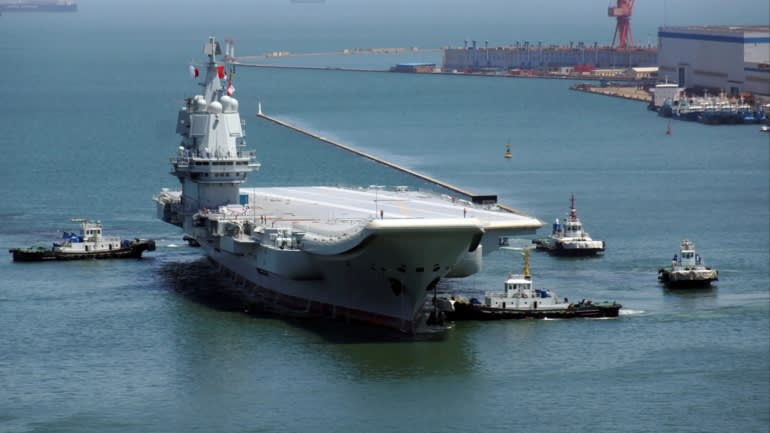 Official's rhetoric on foreign affairs, however, has been far more combative.

Foreign Minister Wang Yi gave the government's support to Huawei as it takes legal action against the U.S. government. He described the arrest of the company's chief financial officer Meng Wanzhou as a "deliberate political move to bring [the company] down."

Indeed, Zhang Yesui, a former ambassador to Washington and a spokesperson for the NPC, said Washington was "unethical" for trying to persuade other countries to block Huawei from their telecom networks.

"Xi has full support domestically when it comes to standing up to the U.S. and he would not want to endanger that," said Diana Choyleva, chief economist at London-based Enodo Economics. "While a trade deal is likely to be signed, the Sino-U.S. confrontation is all encompassing and the tech war is only set to intensify in the coming months."

Despite the economic slowdown, China continued to spend heavily on its military, raising the national defense budget 7.5% from last year. Beijing is seeking to deter the U.S. from further challenging its extensive claims in the South China Sea and to forestall moves by Taiwan to formalize the island's independence from the mainland.

Officials from China's remote western region of Xinjiang also hit back at the international community by denying the existence of concentration camps for ethnic Uighur people, saying instead they have schools there aimed at eradicating the "seeds" of terrorism.

China must resist US pressure to keep yuan stable

But China also addressed issues of great concern to the U.S. during the meetings, including the fast-tracked approval of a new foreign investment law. The legislation promises to provide better protection of foreign investors' intellectual property rights, as well as scrapping forced technology transfers -- a practice that Washington has repeatedly complained about.

But this might not be enough to satisfy Washington.

The American Chamber of Commerce in China said in a statement on March 14 that it is concerned the law will be enacted without extensive consultation and input from industry stakeholders. The chamber said the current provisions are still "quite general" and do not address many persisting concerns.

Yuan Jingdong, an associate professor at the University of Sydney, said the fast approval of the law demonstrates how Beijing is making minimum concessions to get the Trump administration to end the trade war.

"China will drag its feet in meeting U.S. demands -- which are many and could be 'lethal' in slowing down or even derailing Chinese plans to achieve key goals," he said. "Trump's unpredictability has caused many headaches for Beijing as its playbook at managing Sino-U.S. relations for the past few decades is no longer a reliable and comforting reference."