China and Russia to test Japarov after Kyrgyz election cakewalk Sadyr Japarov, who was in prison a little over three months ago, positioned himself as a "man of the people" and trounced his election rivals.   © Reuters
PAUL BARTLETT, Contributing writerJanuary 11, 2021 17:06 JST | Kyrgyzstan
CopyCopied

BISHKEK, Kyrgyzstan -- Kyrgyz voters have elected a populist new president and simultaneously chosen how they want to be governed in a referendum. In contrast to the violent scenes that followed rigged parliamentary polls last October, the voting on Sunday passed peacefully, with the favorite Sadyr Japarov cruising to a landslide victory.

The election may prove to be the easy part for Japarov, who now faces a host of economic problems as well as challenging relations with his country's two main partners -- Russia and China.

As expected, the populist politician -- who was sitting in a prison cell a little over three months ago -- trounced the competition. The margin was in fact larger than anticipated. The latest available results show Japarov gaining 79.2% of the vote, while his nearest rival, Adakhan Madumarov, was a distant second with 6.69%. The other 15 candidates and the "Against All" option shared the remainder. Turnout was low at just under 40%.

Voters also backed calls to return Kyrgyzstan to a presidential system of rule, versus the current parliamentary system. According to the preliminary results, 81.52% voted in favor of the switch. The precise nature of this constitutional reform will be decided in the coming months.

"I come to power at the most difficult moment, so I need your support for the next three to four years," Japarov said in his victory speech. "You all know that one or two years is not enough to solve problems. I believe that we will get out of the crisis. For this we need political stability."

The charismatic nationalist has positioned himself as "a man of the people" and enjoys widespread popularity among traditional, conservative voters who are disillusioned with the political class and the endemic corruption that riddles government. "We hope that all the promises he is making will be fulfilled, because the people are fed up with waiting for there to be a normal, real government and for there to be changes for the better," Alik, a middle-aged man attending a Japarov rally in Bishkek on Friday, had told Nikkei Asia. 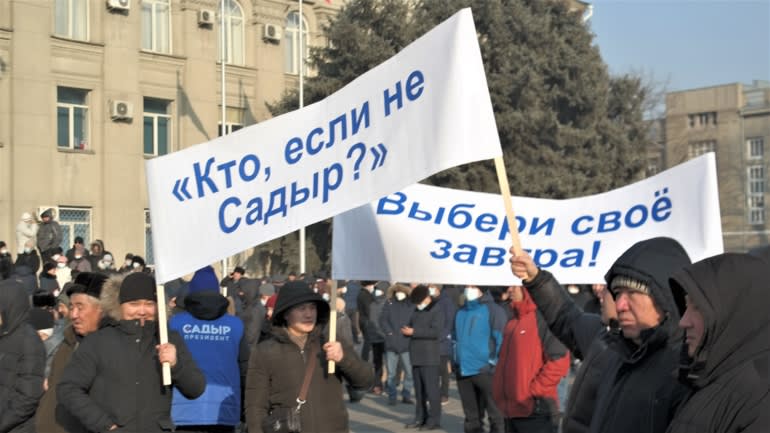 Sadyr Japarov supporters attend a campaign rally in downtown Bishkek on Jan. 8. The banners read, "Who, if not Sadyr?" and "Choose your tomorrow!" (Photo by Paul Bartlett)

President Japarov's rapid ascent began in inauspicious circumstances. Back in early October he was in jail, three years into a 10-year sentence for organizing a kidnapping. He was sprung during a night of unrest following Oct. 5 protests against the tarnished parliamentary election. He quickly assumed the roles of prime minister and -- after incumbent Sooronbai Jeenbekov resigned on Oct. 15 -- acting president. He relinquished these posts in November to run in Sunday's vote.

He brings little political experience but plenty of enthusiasm to the top job. Between two short stints as a member of parliament between 2005 and 2007 and 2010 to 2013, he was head of former President Kurmanbek Bakiyev's National Corruption Prevention Agency. Bakiyev's five years in office from 2005 to 2010 -- when he was forced out after 88 protesters were killed in clashes with police -- are widely regarded as the most corrupt in Kyrgyzstan's history.

Japarov now inherits an economy that has been hit hard by the global coronavirus downturn. The Asian Development Bank forecasts a 10% contraction for the country in 2020 -- much deeper than its projection of a 2.1% decline for Central Asia as a whole.

"Japarov is going to face a very difficult situation because the treasury is empty and people's expectations are very high," political scientist Asel Doolotkeldieva told Nikkei Asia. "The support of international partners and the regional partners is most likely going to diminish. Even Russian support is unclear for the moment," she explained.

Russia is a key strategic ally for Kyrgyzstan, a point Japarov reiterated after he cast his ballot on Sunday morning in Bishkek. Kyrgyzstan is a member of the Moscow-led Eurasian Economic Union and is home to four Russian military facilities including an air base.

Kyrgyzstan is heavily reliant on remittances from its migrant workers in Russia, returns that have been slashed by the pandemic. In 2019, these remittances accounted for about 28% of gross domestic product. They fell 7% year on year for the period from January to August 2020, according to the European Bank for Reconstruction and Development. Migrant workers from Kyrgyzstan harvest cabbage near Krasnoyarsk, Russia, in this 2018 photo. The pandemic has cut into vital remittances from such workers.   © Reuters

Neighboring China is Kyrgyzstan's other key partner, although relations have been at a low ebb of late. Kyrgyzstan owes $1.8 billion to the Export-Import Bank of China, on loans taken for projects linked to Beijing's Belt and Road Initiative. Late last year, the Chinese government offered a grace period, at 2% interest on this debt.

Relations with China have also been strained by an alarming wave of attacks on Chinese business interests in Kyrgyzstan after last October's unrest. Chinese-run mines and an oil refinery were targeted in shakedowns by mobs, using threats of violence to extort money.

"There is a chance that people might get disappointed very quickly with Japarov unless he goes for radical, extreme steps," said Doolotkeldieva. These could include "selling some strategic natural resources to China," a move that would be fraught with dangers given the widespread anti-Chinese sentiment in Kyrgyzstan.

In recent months there has been a lot of talk about Kyrgyzstan's Jetim-Too iron ore deposit, one of the world's largest. In November, Japarov suggested the extracted ore could eventually be used to pay off the debt to China, but he stopped short of suggesting that the reserve could fall into Chinese hands. There are plans for the Kyrgyz to develop the deposit, but significant loans would be needed to put the necessary infrastructure in place to make the project viable.

One thing is for certain: President Japarov needs to hit the ground running and come up with some quick results if he is going to keep the public on his side. To see how quickly that can change, he need only look to his predecessors, who were ousted following popular uprisings when things went wrong in 2005, 2010 and last October.