China can learn from Japan's price-keeping operations in the 1990s

TOKYO -- Journalists who cover stock markets for many years are prone to episodes of deja vu.

The most recent occurrence was when the Chinese government decided to step in to prop up share prices, approve far fewer initial public offerings and jawbone the markets, among other measures. All these interventions bear a striking resemblance to the stock price-keeping operations undertaken by the Japanese government in the 1990s.

Japan's efforts to buoy its sagging equities market created enduring problems for the country. That should serve as a warning for China today.

An excerpt from a Nikkei front-page story headlined "Bureaucrats" on Dec. 11, 1993, sets the scene in the Japanese stock market more than 20 years ago.

It reads: "There are a variety of [price-keeping] techniques. Basically, the government spends a huge amount of public funds to shore up share prices directly. ... [Or] instead of using cash on hand, it can employ a subtle method called 'questioning' to intervene in the market. Bureaucrats never come off as forceful in their speech but simply ask questions: 'Why are you selling?' or 'Prices are down considerably, aren't they?' Officials at financial institutions read between the lines and act accordingly. It is a world of tacit understanding."

The story describes Japan's efforts to buy shares, curb stock selling and control the issuance of new shares. Such heavy-handed tactics would be unthinkable to many novice investors today.

After hitting a record high of 38,915 at the end of 1989, the Nikkei Stock Average began falling in early 1990, pointing to the looming collapse of the economic bubble. Back then, however, analysts believed the downturn was merely a correction after a sharp rally and that the broader trend was still upward. Few took the falling stock prices as a sign of serious structural problems in the economy that needed addressing.

But by the spring of 1992, the index had fallen below 20,000 for the first time in five years, sending a wake-up call to the business community and market players. The bureaucracy had significant influence over a broad range of sectors in Japan at the time, which helped give rise to the market stabilization measures.

The intervention helped stock prices avoid a free fall and the Nikkei average bounced back to 22,666 in June 1996. But that was the final peak in the 1990s. In 1997, Hokkaido Takushoku Bank and Yamaichi Securities collapsed and gloom suddenly took hold in the stock market.

Share prices are often said to be a mirror that reflects the state of the real economy. Simply polishing the mirror, however, will not necessarily improve the economy. Nevertheless, the steps the government took to support the market created the false impression that the real economy was recovering, which took pressure off policymakers and bureaucrats to come to grips with fundamental problems with Japan's economy.

In the 1990s, Japan kicked the can down the road and failed to deal with banks' nonperforming loans, while brokerages continued to fiddle with their books, shifting losses to group companies. Hokkaido Takushoku Bank and Yamaichi Securities were doomed because they failed to take serious steps to revamp their operations.

In China today, the authorities are pressuring securities houses to buy exchange-traded funds, telling companies to abandon IPOs and restricting large-lot selling. These moves are variations on what happened in Japan during the 1990s.

But there are differences. While Japanese bureaucrats never admitted to pressuring stock market players at the time, Chinese authorities are making their moves in the open. Moreover, China allows businesses to apply for a suspension of stock trading, a unique system for an emerging nation where investors are still at a disadvantage. 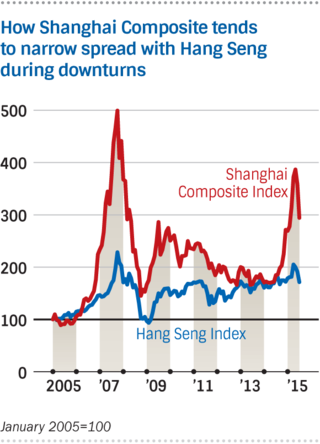 The question is whether the Chinese market stabilization effort will work. It may be able to prevent a collapse in the short run. China strictly controls share purchases from abroad on the mainland stock markets. That makes a plunge in share prices triggered by a foreign investor sell-off -- such as Japan experienced in the 1990s -- unlikely.

Still, China has a global stock market in Hong Kong. At present investment capital from abroad flows into the mainland stock markets via Hong Kong, albeit in limited amounts.

Some participants are keeping a close eye on movements of Hong Kong's Hang Seng Index in relation to the mainland's benchmark Shanghai Composite Index. Over the past decade or so, the Hang Seng, which reflects diverse market trends, has been climbing gradually. By contrast, the Shanghai Composite Index, which is led by domestic individual investors' speculative trades, has been on a roller coaster ride over the same period.

The Shanghai index has shown a tendency to behave more like the Hang Seng during downturns. Using January 2005 as a baseline, a comparison of the two indexes shows the Shanghai Composite Index is much higher than the baseline. If experience is anything to go by, this means that Shanghai share prices have a lot of room to fall further. Beijing may find that its efforts to repeal the law of market gravity will end up failing in the end.