HONG KONG -- Stock markets fluctuate. Sometimes violently and with dire consequences. It goes with the territory.

The Chinese government has learned this the hard way and is now obsessed with controlling the country's stock market. It is also fully aware of the risks involved.

Beijing is striving to put the nation's economy firmly on a path of long-term sustainable growth, but the way it manipulates the stock market for that purpose raises serious concerns about possible side effects.

Hand in the till

Investors are nervously monitoring the moves of China's so-called national team -- a posse of cash-rich state investment funds that have been propping up the country's stock market.

Many major Chinese banks are set to announce earnings results through this weekend. Significant changes in the stock prices of these large-cap companies would have a massive impact on the market as a whole. 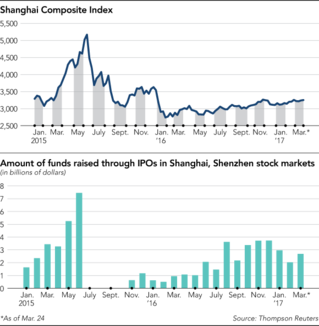 Market players will pay especially close attention to the lists of major shareholders the banks publish along with their financial results. They will focus their attention on whether the shareholdings in these banks by the likes of Wutongshu Investment Platform have decreased in any significant way.

When China's equity market tumbled in the summer of 2015 and again in early 2016, the government took radical steps to stem the fall, including regulatory restrictions on sell-offs.

Now, Beijing is working hard to prevent the market from overheating.

The policy focus shift occurred last summer, when the government started allowing more initial public offerings. After the market crash, the government effectively banned IPOs and permitted only a very limited number of stock market debuts thereafter. Since last summer, though, the government has markedly eased that restriction, allowing IPOs to rise back to levels seen before the crash.

Last month, the government took another step toward taming the rise of the market when it punished an investment company that had built up a huge stake in China Vanke, a leading property developer, calling the investor "barbarian."

In addition, the People's Bank of China, the central bank, cut its supplies of funds to financial institutions in both February and March.

These moves have been seen as a warning to investors engaged in speculative stock plays. They have also generated expectations that state-owned funds could start massive selling of their shareholdings.

The government fears that economic recovery could lead to speculative bubbles. Money supply has remained at high levels, raising the risk of the stock market shooting up to an unjustifiable level.

China's policymakers learned bitter lessons about the risks posed by an overheating stock market from the crash in 2015.

The benchmark Shanghai Composite Index soared 150% in the year to June 2015 as the government promoted stock investment as an alternative to real estate for retail investors. Policymakers apparently wanted to calm the nerves of individuals who had suffered losses from the cooling of the real estate market.

State-owned media went so far as to publish articles making bullish predictions about the stock market. But the stock market bubble eventually burst, causing many investors to lose large amounts of money. The bust delivered a heavy psychological blow to policymakers as well.

Beijing learned that what goes up must come down.

Ever since, the government has been focusing its efforts on ensuring stock market stability through operations to support stock prices without causing the market to overheat.

The upshot is that over the past year stock prices have fluctuated little.

However, the excessive effort put into controlling the stock market is rather baffling. Such intervention effectively deprives the market of its ability to perform core functions.

Last year, turnover in the Chinese stock market, a key indicator of the liquidity of stocks, fell to less than half the level in 2015.

A meeting of institutional investors held in Beijing earlier this month offers insight into the way policymakers are thinking.

China is facing the difficult policy challenge of raising the share of consumer spending in its economy.

Investors attending the Beijing meeting expressed hopes for growth in consumer spending, which currently accounts for less than 40% of the nation's gross domestic product.

Young consumers who were born in the 1980s and later hold the key.

In contrast to older generations, who are inclined to save because of their age and experience during the turbulent years of the Cultural Revolution, younger consumers are far more eager to spend.

Policymakers are betting on two prospects to fuel consumer spending: the government's policy change to allow families to have a second child and the rapid growth of online shopping.

A sharp decline in stock prices would dampen everything. A stock market debacle would damage not only consumer confidence but also trigger a financial crisis, making consumers even more jittery.

One lesson from 2015 is that a stock market tumble can also threaten the survival of financial institutions that lend money to individuals and companies by using their shareholdings as collateral.

More to the point, the weakening of consumer sentiment would derail President Xi Jinping's policy initiative to implement structural economic reform aimed at driving growth via consumer spending rather than investment.

That could cause the political winds to buffet the Xi administration when the all-important Communist Party conference is held this autumn.

Ultimately, political factors are behind China's fixation on maintaining stability in the stock market.

But this policy has also produced unwanted side effects. The market has lost its ability to put pressure on corporate management, generating moral hazard among Chinese companies.

China's corporate debt swelled to 166% of GDP at the end of September last year, more than 70 points higher than the average of 20 major countries, according to the Bank for International Settlements. The figure rose nearly 50 points in five years, meaning that corporate borrowing grew at a faster rate than the economy.

Chinese companies have spent borrowed money on excessive capital investment, turning many of them into zombies.

The reference to the undead was used in the 1990s to indicate moribund Japanese companies kept alive by financial support from the government and banks.

In Japan, the collapse of the 1980s stock market bubble forced companies to keep reducing debt for many years.

This resulted in the unwinding of cross-shareholdings between banks and their borrowers, paving the way for the emergence of a new breed of activist shareholders who put additional pressure on companies to improve management and operations.

The stock market in Japan served as the main driver for the balance-sheet adjustments made by Japanese companies. But China is unlikely to allow its stock market to sink and, in effect, force companies to push through painful reforms.

The Japanese economy managed to withstand the hardships during its "lost two decades" because of accumulated financial and social wealth.

China's households had $18.2 trillion worth of financial assets in 2015, according to Boston Consulting Group. That is only 34% higher than the figure for Japan despite the fact that China's population is over 10 times larger than Japan's.

Speaking about the government's determination to fend off a full-fledged financial crisis at the opening of the annual session of the National People's Congress, Premier Li Keqiang said the government had the confidence, spirit, ability and method to achieve the mission.

The continued stability of the Shanghai stock market is a sign of the government's commitment to the challenge and a symbol of China's state-controlled capitalism.

But it also signals the government's tendency to succumb to the temptation to put off painful but necessary reforms by avoiding pressure from the market.

All of this means that we cannot easily rule out the possibility of the first global recession in world history that originates in China.