OTTAWA -- As Canada goes to the polls for what is expected to be a tight federal election on Monday, the winner will face a festering dispute with China that has vexed Prime Minister Justin Trudeau's Liberal government for years.

The Conservative Party's pledges include government recognition of "the Uyghur genocide" in Xinjiang and banning Huawei from Canada's 5G telecom infrastructure, as well as trade supply interruptions, cracking down on suspected foreign influence operations on Canadian soil and sanctions on Chinese leaders. O'Toole has also urged a boycott of the 2022 Beijing Winter Olympics and suggested moving the Games to the West Coast of Canada and the U.S.

"Trudeau's China policy has primarily been more concerned with improving relations for well-connected Liberals than with defending Canada's interests and values," the Conservative election platform says.

Trudeau, who is hoping for a third term, has repeatedly criticized China over the arrests.

Bilateral relations deteriorated after Meng -- the daughter of Huawei founder Ren Zhengfei -- was taken into custody in Canada on Dec. 1, 2018. She was held on a warrant for extradition to the U.S. to face fraud allegations related to American sanctions on Iran.

A few days later, China arrested Canadians Michael Kovrig, a diplomat on leave to work for the International Crisis Group, and businessman Michael Spavor. They were charged with espionage, subjected to secret trials and remain imprisoned. Spavor was recently sentenced to 11 years, while Kovrig's sentence has not been announced. 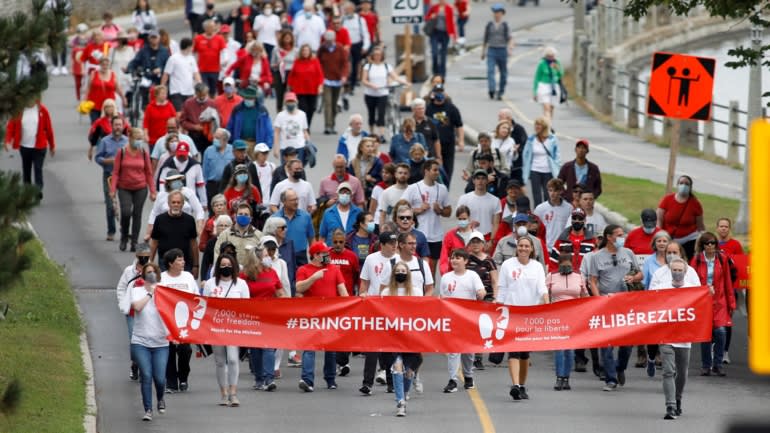 Supporters of Michael Kovrig and Michael Spavor march in Ottawa on Sept. 5 to mark 1,000 days since the Canadians were arrested in China.   © Reuters

While Canada regards China's actions as "hostage diplomacy," Beijing has accused Canada of "microphone diplomacy that is doomed to fail" -- a reference to the government having secured signatures from 66 countries for a Declaration Against Arbitrary Detention in State-to-State Relations. Arbitrary detention is the term Trudeau has frequently used for China's treatment of "the two Michaels."

Trudeau called the election a little under two years since the last one, betting on the popularity of his minority Liberal government's handling of the COVID-19 pandemic and hoping for a majority this time. Health Canada says over 77% of Canadians aged 12 and up have received two vaccine doses, though infections are trending upward again.

But polls show a close race between the Liberals and Conservatives in the popular national vote, with pundits predicting a few days before the election that either party could win a minority. A minority would need the support of a third party, the New Democratic Party or the Bloc Quebecois, to govern. Canada's tradition is for informal support, rather than formal governing coalitions.

Both Liberals and Conservatives have pledged to stand by "the rule of law" in Meng's case, which means no political intervention while the extradition arguments are in the courts. The British Columbia Supreme Court's associate chief justice, Heather Holmes, said she will announce on Oct. 21 when to expect her ruling on extradition. If Meng loses, she is expected to appeal immediately.

When Joe Biden was elected U.S. president, there was speculation the U.S. Justice Department might drop the extradition request. That has not happened, although the Toronto Globe and Mail -- citing unnamed sources -- reported on Friday that the U.S. has resumed discussions with Huawei and lawyers for Meng about a possible deferred prosecution agreement that could allow her to return to China.

The U.S. is prepared to end the extradition request and criminal proceedings against Meng if she pleads guilty and pays a hefty fine, the Globe said. Huawei accepting corporate responsibility for violating sanctions is not part of the discussions, the report noted. And the talks do not involve the fate of the two Michaels, it added.

The U.S. Department of Justice, however, was quoted as saying only that it continues to pursue Meng's extradition.

When contacted before the Globe report, Guy Saint-Jacques, Canadian ambassador to China from 2012 to 2016, said it appeared unlikely the U.S. would drop the case.

"Joe Biden, especially after the debacle in Afghanistan, will not want to spend the political capital that would be required to water down the plea bargain that would be required" for Meng, he predicted in an interview. "So that means there won't be any short-term solution coming from Washington."

Saint-Jacques said a judgment rejecting the extradition request "would be an elegant solution" because the rule of law would remain intact. If extradition is ordered, Meng's appeals in the courts could take three or four years, "which means we have to brace ourselves for three or four years of bad relations with China."

Either way, Saint-Jacques said, the next government needs a clearer policy on China than the Liberals have had so far. "I think the Liberals could have been a lot more forceful." 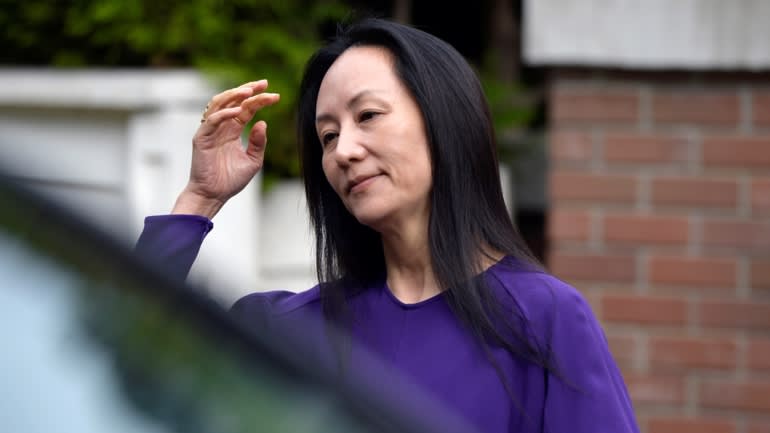 Neither relations with China nor other foreign policy issues received significant attention during the election campaign. An exception was during a nationally televised leaders' debate, when O'Toole accused the prime minister of "letting the Michaels down" and failing to defend human rights for Uyghurs and Hong Kong citizens.

"If you want to get the two Michaels home, you do not simply lob tomatoes across the Pacific," Trudeau fired back. "You need to engage with our allies every step of the way and put that pressure on, and that's exactly what we have done."

O'Toole took another verbal shot at Trudeau after the announcement on Thursday of an Indo-Pacific security agreement among the U.S., U.K. and Australia, dubbed AUKUS. "He's not getting called by other countries because Canada is becoming irrelevant under Mr. Trudeau," O'Toole argued, when responding affirmatively to a question on whether he would try to join the group if he wins the election.

Canadian officials rejected suggestions that Canada was snubbed by AUKUS. Canada's defense minister and global affairs officials told media that they were kept in the loop in advance of the announcement. Trudeau characterized the pact as "a deal for nuclear submarines, which Canada is not currently or anytime soon in the market for," unlike Australia.

"We will continue to work alongside our partners to ensure that we're keeping ourselves safe and we're standing up against challenges, including those posed by China," Trudeau told reporters. He noted that Canada continues to be a member of the Five Eyes intelligence alliance -- alongside the three AUKUS countries plus New Zealand -- and continues "to share information and security approaches with our partners."