The Chinese Communist Party announced in May that they would allow couples to have a third child, though few feel they could afford it.   © Reuters
IORI KAWATE, Nikkei staff writerAugust 18, 2021 03:29 JST | China
CopyCopied

BEIJING -- An extra month off and $80 monthly stipends and 30-day days of additional leave part of a series of sweetners local governments have unveiled as China kicks off the legislative process to allow married couples to have a third child in a drive to curb a precipitous decline in births.

The push comes as Chinese President Xi Jinping ramps up efforts to encourage families to have more children. A shrinking workforce and increased social spending have stoked concerns that China's economic growth may slow and hamper the country in its growing rivalry with the U.S. But fiscal constraints and rising living and education expenses loom heavy over China's campaign to prevent a demographic crisis.

The National People's Congress Standing Committee, the country's top legislative body, began deliberations Tuesday toward formally amending China's family planning law after the Chinese Communist Party revealed its plan to raise the current two-child cap at the end of May.

Ahead of these moves, the city of Beijing this month announced that it would offer an additional 30 days of parental leave on top of the standard 98 days for mothers giving birth to a third child starting May 31. They could take an extra one to three months off if their workplaces agree. The capital plans to offer further incentives in coordination with legal amendments by the central government.

In late July, the city of Panzhihua in Sichuan Province said it would subsidize parents until their second and third children turn three. The government will pay 500 yuan ($77) per month per child born starting June 12 to a married couple -- equal to more than 10% of the average disposable income per person in the heart of the city.

Meanwhile, Yueyang's city statistics bureau recommended that all children in three-children households receive free compulsory education from preschool to high school to reduce education costs following a review of demographic trends. It also called for subsidies for prenatal testing and childbirth in the Hunan Province city.

The central government is also working to ease the burden on new parents. The proposed amendment to the family planning law includes such measures as better child care services. The government will also consider tax cuts and housing subsidies to families with children, and will abolish fines for couples who violate the cap on children.

Chinese bills usually go through three rounds of deliberations at the NPC Standing Committee. The family planning amendment is expected to pass as early as this year.

The central government is increasing its involvement in how parents raise their children with a separate bill, also expected to pass this year, urging families to pass on values like diligence and care for the elderly, and loyalty to the country and the Communist Party.

The bill emphasizes the importance of instilling responsibility in children, such as by putting them in charge of cleaning their own rooms, and keeping them to a structured schedule. It urges families to teach children to protect national unity and to be loyal to their country, the Communist Party and socialist ideals. Schools and neighborhood associations will advise families on how to teach these ideals to their children once the bill is passed. 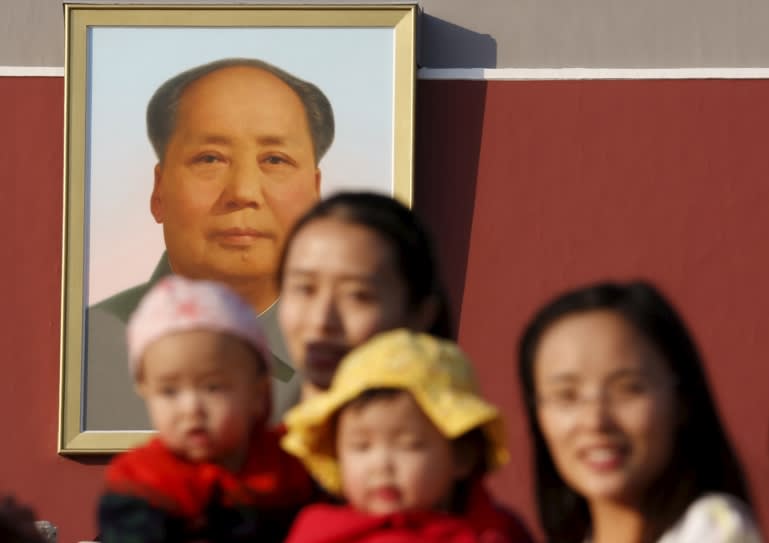 Mao Zedong's portrait at Tiananmen Square in Beijing: A new bill urges families to teach children to be loyal to their country, the Communist Party and socialist ideals.   © Reuters

The bill is a response to the intense focus on academic success in the country, after years under the one-child policy led parents and grandparents to pour their resources into a single child. The resulting surge in education costs is one of the main concerns holding young couples back from having children. And many who do need both parents to work, especially in expensive cities, creating greater expectations on schools to teach children ideals and discipline in addition to academics.

The government has recently begun clamping down on the tutoring industry to make child-rearing more affordable, such as by requiring certain businesses to convert into nonprofits. The new bill is intended to pull some focus away from such formal educational institutions and toward instilling core values at home, partly also to combat tangping -- a growing movement among younger generations to "lay flat," or to opt out of the high-pressure race for professional success in favor of a simpler, more frugal life, especially as living costs rise.

Still, whether these policies can help raise Chinese birthrates remains unclear. Direct government subsidies help alleviate the burden on child-rearing families. But education expenses only increase as children grow older, and critics say these new plans that focus on babies and young children are not enough.

Yanbian, an autonomous prefecture home to ethnic Koreans in Jilin Province, announced in late 2012 that it would pay parents 1,000 yuan per month for 50 months after the birth of their second child. But the program, which offers a larger payout for a longer period of time than Panzhihua's plan, has seen limited success. The birthrate among ethnic Koreans is the lowest in China, according to Yi Fuxian, a senior scientist at the University of Wisconsin-Madison and an expert on Chinese demographics.

Soaring education costs, real estate prices and other expenses have contributed to a widespread view that one child is enough. Many couples are reluctant to have more even now that the government is allowing them to.

There are high hopes of economic support from the government, but local authorities whose finances have been squeezed by measures such as tax breaks to help those struggling amid the coronavirus pandemic have little cash to spare.

China's population is aging at the fastest pace among major economies. Births remain on a downtrend this year, according to the country's National Health Commission, and could drop below the low of 11.97 million recorded in 1961.