The victory for the party could see Sri Lanka flip back into the arms of China, Rajapaksa's favorite lender and builder. The current government had leant toward India and Western powers but this dynamic could now be tested. Already, as a legacy of Rajapaksa's government, Sri Lanka owes China $8 billion of its total $65 billion of debt, equivalent to over 70% of its gross domestic product.

After suffering two back-to-back election defeats in 2015, the return of Rajapaksa's party has not only dealt a humiliating defeat to the coalition government, but also unleashed political chaos. The Sri Lankan rupee fell to a record low this week due to the political uncertainty.

Namal Rajapaksa, the ex-president's eldest son and a parliamentarian, said if his father formed a government, Sri Lanka will continue to rely on China. But he was also quick to add that the government will not extend any preferential treatment to China specifically, and will also invite India, the U.S., the U.K. and Europe to invest in Sri Lanka.

"My father has been close with China, and I believe he will continue this and I see no harm in it. However, it is also important that we have a non-aligned policy. But, we will continue to rely on China, and there is nothing wrong with that," he told the Nikkei Asian Review. 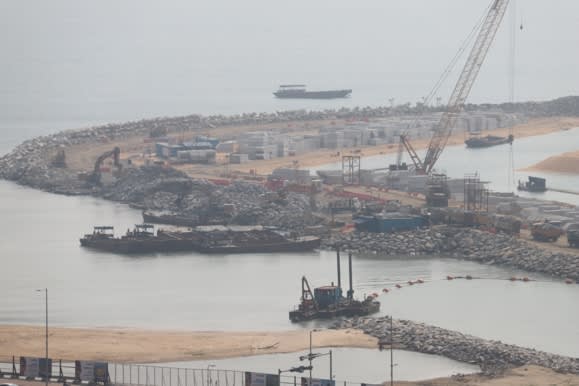 Port City Colombo is being developed by China in a major land reclamation project. (Photo by Yuji Kuronuma)

Although Rajapaksa has won majority of the local authorities convincingly, he has to rely on the central government to release funds for development in these same wards. Local governments cannot directly borrow from foreign lenders.

As such, Rajapaksa has been pressuring President Maithripala Sirisena to dissolve parliament and hold a snap general election, in the hopes that he will win enough votes to establish a new government. But Sirisena and Prime Minister Ranil Wickremesinghe reached an agreement on Tuesday to continue the coalition government for the next two years and to set up a committee to consider policy changes, including a possible corruption crackdown.

Despite this tentative agreement, Namal Rajapaksa said that the internal bickering within the coalition did not bode well for its future. "There is no political stability within the central government. They are constantly arguing and both parties are having opposing policies. This is why we are calling on President Sirisena to dissolve parliament and go in for a snap election."

But dissolving parliament is not as easy as it used to be in Sri Lanka. In mid-2015, Wickremesinghe introduced a new legislation that gave sweeping powers to parliament and removed certain powers of the president including his ability to dissolve parliament at his discretion.

The president can now only dissolve parliament if two-thirds of the members of the house agree to do so, or any time after the expiration of four-and-a-half years following the first parliamentary meeting.

Sirisena does not have the support of two-thirds of the members in parliament to pass such a resolution. He has not made any official comment since losing the election, and had been expected to make a statement on Friday.

However, late Thursday night Sirisena reversed his decision to make a statement, plunging the country into greater uncertainty. He also held a series of discussions on Friday morning with parliamentarians from Rajapaksa's opposition group. They have expressed support for Sirisena's move to form a government without Wickremesinghe's UNP. He is also expected to consult the attorney general on the the possibility of removing Wickremesinghe as prime minister.

Muttukrishna Sarvananthan, a development economist and the principal researcher of the Point Pedro Institute of Development in Sri Lanka believes that China will gain, if Rajapaksa comes to power again because of his anti-Western attitude. "Rajapaksa will keep on depending on China for foreign investments to keep the economy running," he said.

During his decade-long rule, Rajapaksa relied on China to fund mega infrastructure projects in the country including his hometown, Hambantota, where he built a second international airport and a port, which have both become white elephants. The port was leased to China last year by the Wickremesinghe government for 99 years, and talks are underway with India to lease the airport, dubbed the world's emptiest.

But Rajapaksa's win also means the coalition government is now desperate to regain its popularity. Shailesh Kumar,a director of New York-based consulting group Eurasia Group, warned in a Feb. 13 report that economic reforms will now take a back seat.

"Opening the domestic freight-forwarding industry to foreign companies will be delayed, as will plans to privatize state-owned hotels. These decisions will adversely affect foreign direct investment at a time when Sri Lanka's foreign exchange reserves could benefit from capital inflows," Kumar wrote.

Sarvananthan said the coalition will also now be forced to provide subsidies and other handouts to the people to win votes at the next presidential and parliamentary elections scheduled for 2020, thereby increasing government debt.

But voters see a brighter future. "The Wickremesinghe government hasn't done anything, while Rajapaksa during his presidency brought lots of economic development in this country by bringing in Chinese money," said Pradeep, a taxi driver in Galle, a southern city.

Welson, an owner of a tea shop outside the Hambantota port, agreed: "Rajapaksa built this port and had further plans for building hotels here among others, while Wickremesinghe government cancelled those plans and just sold out the port to China."