New law seen as warning to Japan and US over Senkakus 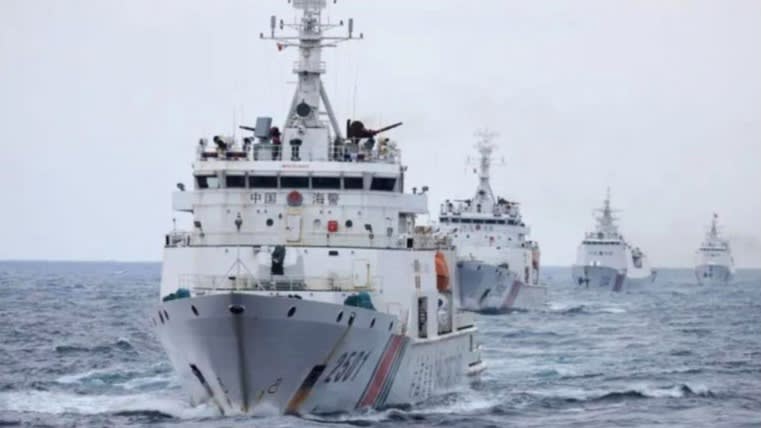 Specifically, it authorizes the coast guard to fire on foreign ships under certain circumstances. The agency will be empowered to "carry out defense operations" under the orders of the Central Military Commission, the military's top decision-making body.

President Xi Jinping signed the presidential orders to promulgate the law, which will go into effect Feb. 1. It comes a day after Biden's national security adviser, Jake Sullivan, assured his Japanese counterpart that the Japanese-administered Senkaku Islands fall under the U.S.-Japan defense treaty, and is likely to further heighten tensions in the East China Sea.

This is particularly alarming to Japan as it deals with increasingly frequent Chinese incursions into waters around the Senkakus, which are claimed by Beijing as the Diaoyu. More than 1,100 Chinese government ships entered the contiguous zone around the islands last year, an annual record, and Japan plans to beef up its patrols in the area in response.

"We have conveyed our interest and concern to the other side" regarding the new law, Japanese Foreign Minister Toshimitsu Motegi told reporters Friday. He called Beijing's continued forays around the islands "extremely regrettable."

The timing of the law's passage -- shortly after Biden's inauguration Wednesday -- suggests that Beijing aims to warn the new administration that it will not budge on its maritime interests.

The coast guard was originally positioned as an administrative rather than a military body, as part of the State Oceanic Administration, to avoid clashes with neighboring countries or the U.S. while still expanding Beijing's effective control in the South China Sea and elsewhere. It was moved under the umbrella of the People's Armed Police in a 2018 reorganization.

The legislation gives the coast guard a mandate to defend waters under China's "jurisdiction" as well as the airspace above them. China has not clearly defined the scope of this "jurisdiction," but it is believed to include the area around the Senkakus and the waters within its "nine-dash line" encompassing most of the South China Sea. The coast guard's duties include protecting islands and reefs as well as artificial islands and other structures, the law says. When asked about the legislation Friday, Foreign Ministry spokesperson Hua Chunying asserted that the Senkakus and affiliated islands are an "inherent part of China's territory," and that the country will protect its "territorial rights and maritime interests."

Beijing has since 2014 engaged in an aggressive island-building program around the Spratly Islands in the South China Sea, which it claims under the nine-dash line despite competing claims from other countries in the region. An arbitration tribunal found that these activities were illegal in a 2016 ruling stating that the nine-dash line has no basis in international law.

China has refused to accept the ruling, calling it no more than a "scrap of paper." The new legislation states that the coast guard will take any "necessary measures" to protect territory claimed by Beijing.

It also stipulates that the coast guard may forcibly dismantle unapproved structures built by foreign countries in waters it claims, signaling that China is prepared to use force to protect its interests in the East and South China seas.

The coast guard will have the right to use "all necessary measures, including weapons," in cases where China's sovereignty is deemed to be violated.

The force had 130 vessels of 1,000 tons or more in 2019, more than triple the 2012 total, after a major expansion under Xi. It has also been confirmed to have 10,000-ton-plus ships equipped with 76-millimeter guns -- larger than the biggest naval vessels owned by the Philippines and Indonesia, which have competing territorial claims in the South China Sea.

Japan's coast guard reported last week that a Chinese coast guard ship entered the territorial waters around the Senkakus and tried to approach a Japanese fishing boat. This marked the latest in a string of similar incidents since last May.

Japanese fishing vessels in the islands' contiguous zone have also been chased by Chinese ships, according to a Japanese government source.