Chinese people are increasingly under surveillance by the government.   © Reuters

TOKYO -- Beijing is applying the finishing touches to what it calls a new "social credit system" meant to centralize credit-related information about individuals and businesses.

The central government has stressed that the system will benefit the public by providing public services more effectively. But it could also be a tool for authorities to identify and punish violators.

The move seems as if the world's most populous nation is building an unprecedentedly vast surveillance society.

China has made "visible progress in developing a national social credit system" in recent years, said Chinese Premier Li Keqiang during an executive committee meeting of the State Council on June 6. He also said the unified social credit codes have been introduced almost nationwide.

The 18-digit alphanumeric code is a key element of the surveillance platform. It is used to record information about permits, registrations and penalties related to businesses and individuals.

According to the government, as of April more than 30 million of the identification codes had been issued to businesses, and more than 500 million records about them were available on the platform. 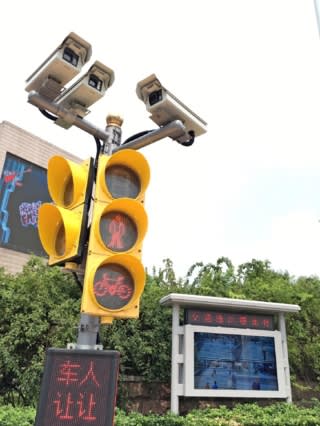 Businesses, once assigned a code, no longer need to present documents to local offices in different locations. Individuals, too, are free from time-consuming procedures, for example when setting up a business. They no longer have to visit multiple offices for permits and certificates.

Japan and other countries are making similar moves, seeking to simplify public procedures and reduce the burden on the private sector as they pursue economic activities.

But that is not Beijing’s only goal.

At the June 6 State Council meeting, participants reaffirmed their commitment to "build a blacklist mechanism, and publish blacklists and information as much as possible" on counterfeiting, piracy, theft and other misconduct. Considering the powers the Chinese authorities enjoy, it should be possible.

The social credit system, still incomplete, is already functioning as anticipated by the authorities.

According to local media reports, a total of 11 million individuals had been blocked by April from buying air tickets, and more than 4 million restricted from buying high-speed train tickets. In early June, the Chinese authorities for the first time disclosed the names of 86 individuals who had been banned from taking air flights.

A society that rates its citizens by credit status is becoming a reality. China has successfully managed to juggle two goals, to improve the public's convenience and to enhance monitoring.

But the financial platform has another role -- to help the authorities monitor speculative investment activities outside of the country. When a Chinese uses the card to pay for something expensive overseas, Chinese authorities can contact the vendor to find out information about the transaction.

Chinese people do not seem especially worried about the powerful new surveillance platform. "From a very early age, Chinese are used to being monitored with the resident identification card," said Mihoko Hosokawa, a research executive at Mizuho Bank (China). They seem to be responding to Beijing's monitoring rather positively, as something to help maintain their safety and security, Hosokawa said.

The nature of China's society and economy may not be comparable to others. But the remarkable success of a country that was an emerging nation not so long ago and has quickly become the world’s second-largest economy would not have been possible without an energetic private sector, as well as the hard work of its citizens.

And the rapid spread of the internet has helped speed up Beijing's efforts to build a surveillance society that would be unthinkable in other major economies.