Beijing has said it is necessary to rein in the rise of foreign interference in Hong Kong, as last year's demonstrations prompted Washington to pass an act to protect the city's democracy and human rights (Nikkei Montage/Source photo by Getty Images and Reuters).
NIKKI SUN, Nikkei staff writerMay 22, 2020 15:18 JSTUpdated on May 22, 2020 19:12 JST | Hong Kong
CopyCopied

HONG KONG -- China on Friday announced draft legislation that will pave the way for it to set up national security institutions in Hong Kong following monthslong social unrest, one of Beijing's starkest moves yet to exert its control over the semi-autonomous territory.

Beijing said it is necessary to rein in the rise of foreign interference in Hong Kong, as last year's demonstrations drew wide international attention and prompted the U.S. to pass an act to protect the city's democracy and human rights.

China insists that the proposed legislation will not compromise the framework of "one country, two systems," under which Hong Kong enjoys a high degree of autonomy that sets it apart from mainland cities.

"When needed, relevant national security organs of the central people's government will set up agencies in [Hong Kong] to fulfill relevant duties to safeguard national security in accordance with the law," Wang Chen, vice chairman of the standing committee of the National People's Congress, China's top decision-making body, said in explaining the proposed bill to roughly 3,000 delegates at the Great Hall of the People in Beijing.

Wang said there were "apparent shortcomings" in Hong Kong's current legal system, and a previous proposal to enact a national security law, known as Article 23, is facing "risk of being delayed for a long period of time."

"[The lack of a national security law] has led to increasingly intense activities in Hong Kong that jeopardize the security of the country," Wang said, as he highlighted anti-government protests last year that saw violent clashes between demonstrators and police. 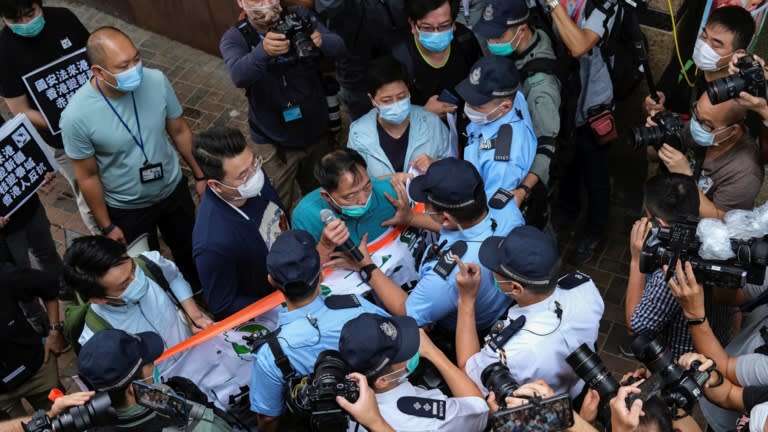 Pro-democracy lawmaker Wu Chi-wai scuffles with police during a march against Beijing's proposed new security laws, in Hong Kong on May 22.   © Reuters

The proposed Chinese law announced on Friday is seen as a replacement for Article 23, which prohibits acts of "treason, secession, sedition, or subversion." The Hong Kong government was forced to suspend the legislation after an estimated half a million people protested against it in 2003.

"Article 23 has been demonized by a group of people with ulterior motives in Hong Kong since its defeat in 2003, and it is difficult to complete the legislative procedure given the current situation," Wang said. He said the "new problems and challenges" had prompted Beijing to push the legislation from a state level instead of relying on Hong Kong to enact its own national security law.

Bruce Lui, a professor at Hong Kong Baptist University and a long-time China watcher, said the plan to legislate the national security law in Hong Kong showed a "drastic change" in Beijing's strategy in ruling the city.

He said that in the past Beijing would usually give such tasks to the local government, but that now it realized that it was impossible to enact Article 23 in Hong Kong through local legislation.

The proposed legislation will be included in an annex of the Basic Law, the city's mini-constitution, and bypass the city's legislature, where meetings are often interrupted by filibustering initiated by pro-democracy lawmakers. Yet such power has not been employed since Hong Kong returned to Chinese rule in 1997.

The bill will be voted on at the end of the annual National People's Congress meetings in Beijing on May 28. The law could go into effect as early as June, but the exact timing is not clear.

Hong Kong stocks tumbled on the news of the proposed legislation, with the benchmark Hang Seng Index closing down 5.6%.

"The security law means the central government in Beijing has taken a more hands-on approach to day-to-day governance in Hong Kong," said Ross Darrell Feingold, a director at global travel security consultancy SafePro Group. "It is clear that regulators in Beijing will manage Hong Kong with a much tighter hand than what they would have had in the past."

Feingold attributed the introduction of the proposed law to the widespread demonstrations that began last June, as well as the fact that pro-Beijing politicians lost ground in November's elections for Hong Kong's district councils.

"There are a lot of unknowns about what will happen with the upcoming Hong Kong Legislative Council election," he said, referring to September's vote.

"We should expect more people taking to the street or internet activities" as a result of the new security law, he said. "In general, [there will be] a lot more tensions between the public and the Hong Kong government as well as the central government."

Civil Human Rights Front, the organizer of last year's peaceful protests against the now-suspended extradition bill, is planning another action, hoping to draw 2 million people out to protest against the new national security law. But the pro-democracy group is not able to announce the details because of social distancing rules under the coronavirus pandemic.

"Even though we cannot confirm any details of our next operation, we would like to let the citizens of Hong Kong know that you should stand up not only for your job, but for human rights, democracy and the freedom of the rule of law, regardless of your political stance," Jimmy Sham, convener of the group, said in a statement on Friday.

Hong Kong Chief Executive Carrie Lam affirmed Beijing's absolute authority to propose a national security law for Hong Kong, and she tried to assure people that the legislation would not affect their freedom and rights, or the city's judicial independence.

"The decision does not amend the Basic Law or replace or repeal Article 23 of the Basic Law," she said. "I deeply believe that the national law to be enacted by the Standing Committee of the NPC will seek to practically and effectively prevent and curb acts and activities that seriously undermine national security, as well as sanction those who undermine national security by advocating Hong Kong independence and resorting to violence."

"We believe the attempt to infringe on Hong Kong's democracy, human rights and freedom under the guise of national security, will not only increase discontent of the people and social instability in Hong Kong, but also heighten the risk of foreign citizens living in Hong Kong and imperil the city's status as a global financial center," it said in a statement.

Two U.S. lawmakers reacted to Beijing's move by proposing a bipartisan bill that would sanction Chinese officials that enforce such a law, and that they intend to "defend Hong Kong's autonomy against increasingly brazen interference from the Chinese Community Party."

Senators Pat Toomey, a Republican, and Chris Van Hollen, a Democrat, said in a statement that their measure "would impose mandatory sanctions on entities that violate China's obligations to Hong Kong under the Joint Declaration and the Basic Law," adding that it would "also impose mandatory secondary sanctions on banks that do business with the entities in violation of the Basic Law."