But the government's toolbox to deal with a downturn is shrinking 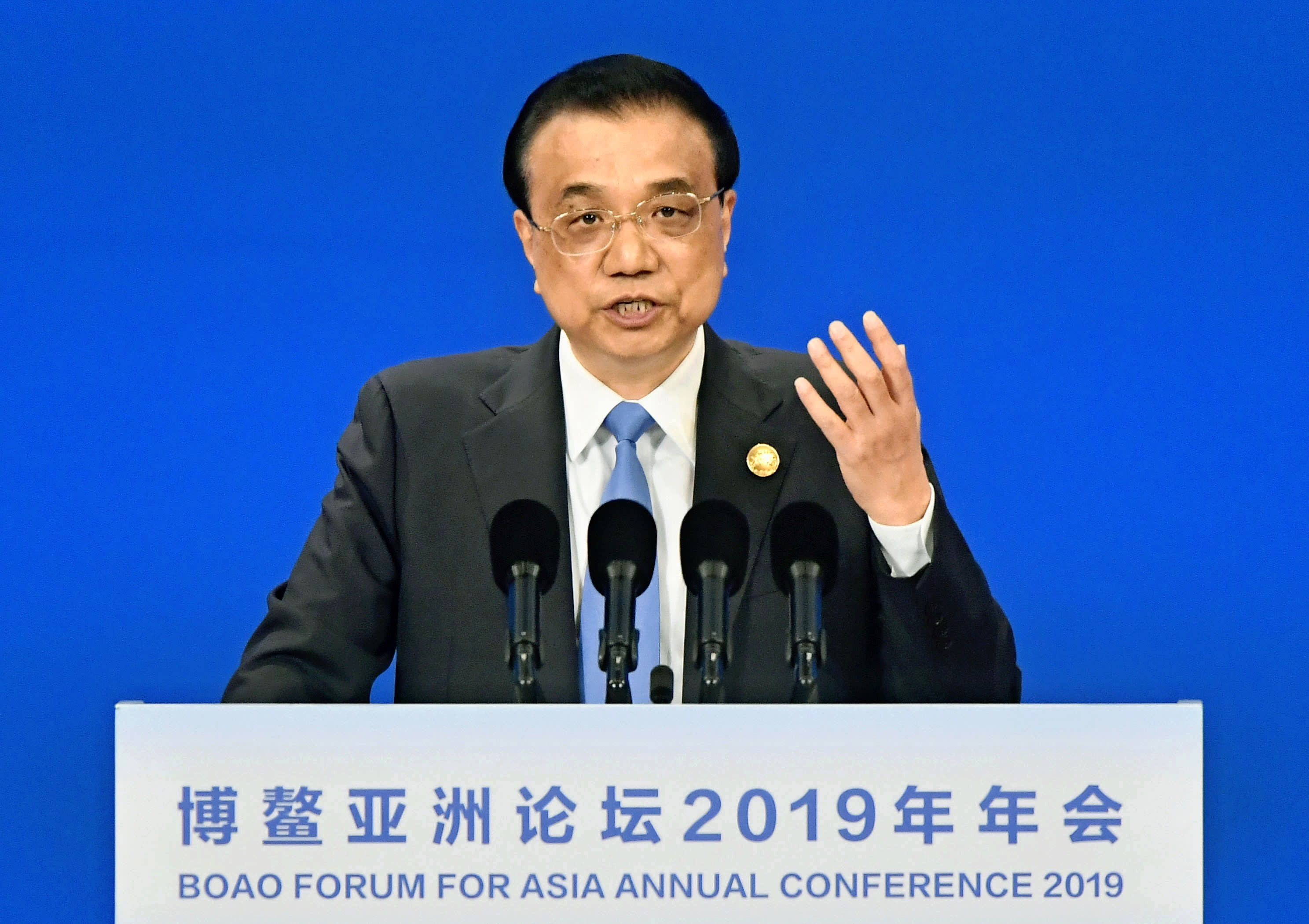 Chinese Premier Li Keqiang speaks at the Boao Forum for Asia on the southern island of Hainan.   © Kyodo

BOAO, China -- Premier Li Keqiang pitched deregulation and tax cuts as stabilizers for his country's slowing economy at this year's Boao forum. As when he spoke three years ago, there are concerns about the Chinese economy, but the issues China faces are deeper this time, and Beijing's policy playbook is thinner.

Li cited trade and electricity generation as evidence that financial deregulation and tax cuts were having an effect, saying reform and opening up will bring out the potential in companies and people. The government decided at this month's National People's Congress to lower taxes and social insurance premiums by 2 trillion yuan ($297 billion).

"Since the beginning of this year, China's economy has been steady and there have been some positive changes," Li said Friday in a speech at the Boao Forum for Asia on the southern island of Hainan.

After the speech, in a meeting with top executives from multinational companies, Li said the economy was more stable than expected in the January-March period. The premier seemed to be trying to quell doubts overseas about a slowdown in the Chinese economy.

The last time Li spoke at the annual gathering of Asia's economic movers and shakers was March 2016. The Shanghai Stock Exchange crisis and yuan depreciation in the summer of 2015 were still fresh in people's minds, and the world wondered about a Chinese economic slowdown. Three years later, the international community is concerned about China again.

China's growth target for 2019 is 6% to 6.5%, compared with 6.5% to 7% in 2016. Both times, Beijing lowered the target from the prior year and gave a range, a sign that it lacks confidence. One thing that is different is the country's response should it miss the mark.

Li said in his 2016 speech that the government would take "overarching measures" if the economy slipped out of range and there was "room for fiscal flexibility" left at its disposal. This time, he said, "if the economy runs beyond expectations we have sufficient tools" to maintain it while acknowledging significant fiscal pressure on the government from the tax cuts.

"It cannot be ruled out this year that the economy will encounter volatility on a monthly or quarterly basis," the premier added, suggesting that growth could dip under 6%.

Beijing also has fewer fiscal and monetary tools at its disposal than three years ago. State-owned enterprises and local governments aggressively stepped up their borrowing due to years of stimulus that have created a mountain of debt in China. Given such concerns, Li said the government "will definitely not rely on quantitative easing or flood-like stimulus" as it has in the past.

China's debt-to-gross domestic product ratio rose to more than 250% last year from 237% in 2016. The government does not want to binge on fiscal or monetary stimulus, nor can it afford to, said Guan Qingyou, president and chief economist at the Reality Institute of Advanced Finance.

Chinese officials pushed the economic gas pedal from 2014 through 2016, resulting in the fastest growth in seven years in 2017, but are now hitting the brakes as they try to steer the economy more safely. There is no room for optimism that the slowdown will stop in the April-June quarter, Guan said.

A new problem has also emerged for Beijing in the form of the U.S. trade war. Li told executives after his speech that the two sides are searching for a mutually beneficial deal as they enter the final stages of their talks. With regard to the American insistence on an enforcement mechanism, the premier said the agreement must be carried out by both sides.

Many of Li's statements were made with the U.S. in mind. He explained China's new foreign investment law banning forced technology transfers, saying the government is drafting related rules to take effect next January, and that foreign banks would have wider scope to operate in China's financial markets.

The speech also made no mention of Beijing's "Made in China 2025" initiative to promote high-tech industries, which Li said the government would "further develop" in 2016.