China's Marriott website ban sends a message to the world

To do business in Asia's No. 1 economy, you better toe Beijing's line

HONG KONG China's temporary ban on Marriott International's Chinese websites sent a clear warning to international companies: If you want to do business in the world's second-largest economy, then you have to toe the Communist Party's line.

Analysts are warning that businesses will have to be even more cautious as authorities in China take a tougher stance on foreign companies.

That tougher stance was clearly illustrated in early January when U.S. hotel group Marriott, Spanish fashion retailer Zara and American carrier Delta Air Lines were named and shamed for listing some of China's "inalienable regions" as separate countries. Marriott was ordered to shut down its Chinese websites for a week, and the others were ordered to issue public apologies. Some angry internet users even threatened to boycott the brands.

Outside of China, it is typical for companies to list Taiwan, Hong Kong and Macau -- where people hold different passports from mainland Chinese -- separately from China. It is when these territories are listed under the category of "country" that Beijing takes issue.

Under the leadership of President Xi Jinping, who has cemented his power to a level on par with Mao Zedong and Deng Xiaoping, authorities have become less tolerant of anything that contradicts their political agenda -- particularly their definition of sovereignty. Citizens, too, emboldened by China's rise on the global stage, are now quick to blast any company they deem to have slighted their country.

The recent drama drives home the fact that for foreign companies, the Chinese market is as much a minefield as a gold mine, and that even a small misstep can end up costing them a big chunk of their revenue.

"China fired a warning shot across the bow of these companies. They succeeded in their intent," said Alan Hilburg, president and CEO of crisis management consultancy HilburgMalan. He said that "more than any time in history," global brands need to be attuned to geopolitical sensitivities and local cultural nuances.

To navigate this increasingly delicate environment, Hilburg said, companies need to be more careful about their presentation in China and be able to "see and respect completely different values while not judging them."

Mark Rushton, senior director in strategic communications practice of FTI Consulting, said that with sensitivities so high, it is easy to cause offense unintentionally. He pointed to foreign companies that have found themselves in hot water for using only one name to refer to disputed areas. He cited Arunachal Pradesh as an example: India sees it as one of its 29 states, but China claims a major portion of it as "South Tibet."

Another common misstep is the use of widely accepted maps that are considered by Beijing to incompletely represent or mislabel part of China, he added. "However, the ability for companies to be sensitive to such political issues becomes significantly more difficult when considering the range of external communications developed at headquarters or elsewhere outside China," he said.

Beijing's ever-tighter internet restrictions make it even more challenging for executives at overseas headquarters to understand the complex political issues in China.

The imposition of the so-called Great Firewall has created a more difficult business environment in China, according to half of the respondents surveyed by the European Union Chamber of Commerce in China in 2017.

"Access to the worldwide web has become a major frustration for companies operating in China. The solutions provided by the government are not working," said Mats Harborn, president of the chamber, referring to the provision of government-approved virtual private networks. 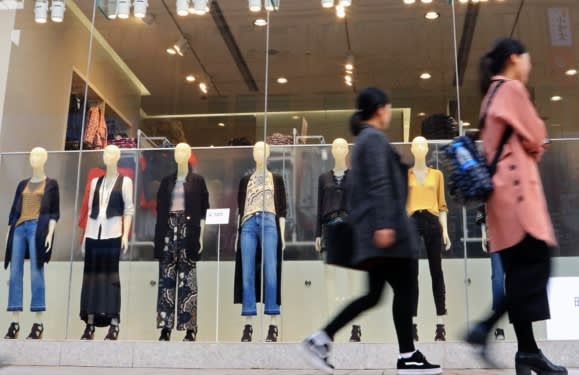 Spanish fashion retailer Zara has also been called out for listing some of China’s “inalienable regions” as separate countries.(Photo by Akira Kodaka)

PULLED IN TWO DIRECTIONS But multinationals that bow to authorities' demands in exchange for access to the Chinese market can find themselves under pressure from customers elsewhere who disapprove of the undemocratic practices and censorship in the country.

For example, Apple drew fierce criticism when it removed VPN apps -- which allow users to bypass the Great Firewall and access overseas sites -- from its China App Store last July.

Facebook, YouTube, Twitter and a number of foreign media outlets are banned in China. Google has been unavailable in China since 2010 due to its refusal to comply with Beijing's request to filter content that appeared on its search engine.

And authorities are not the only ones multinationals need to please in China. Chinese customers, who have become increasingly sensitive to foreign criticism of their country, can also cause headaches.

Charlie Pownall, author of "Managing Online Reputation: How to Protect Your Company on Social Media," blames Beijing and official media for tacitly backing action against foreign companies by consumers.

"Most of [the] accusations have been -- and remain -- tacitly encouraged or directly started by Beijing, often through the mainstream media, which gives them a high level of credibility, not least at a time when the nationalist pot is being actively stirred," the reputation and communications adviser said in an email.

For example, complaints about multinationals listing Taiwan as a separate country have appeared on Weibo -- China's equivalent of Twitter -- from time to time. But it was only when an image of a Marriott email survey that listed Hong Kong, Macau, Taiwan and Tibet as separate countries was circulated by the Communist Youth League of China, the youth wing of the Communist Party, on Weibo that the news started to cause a stir.

By contrast, when state-owned Air China was found to have listed Taiwan, Hong Kong and Macau as separate countries on its Hong Kong website, Global Times, a tabloid sponsored by Communist Party mouthpiece the People's Daily, praised the Chinese airline for its quick response in fixing the issue.

Pownall also pointed out that China's importance on the world stage can also pose risks to multinationals outside the country.

"Like it or not, foreign companies need to appreciate that all their business activities -- and not just those in China -- are now more likely to be seen in a Chinese context, and that their foreignness will play out in any resultant incident or crisis in the country."