China's Xi has a message for party elders: Get out of my way

BEIJING With a few simple exhortations, Chinese leader Xi Jinping wanted to make it clear to all that he called the shots.

"Always listen to and follow the party's orders, and march wherever the party points," the president -- who is also head of the ruling Communist Party and the People's Liberation Army -- told PLA troops on July 30. They had assembled for a massive military parade at the Zhurihe base in the Inner Mongolia Autonomous Region, and Xi was presiding over the event.

He also called on the soldiers to "unswervingly" back the party. 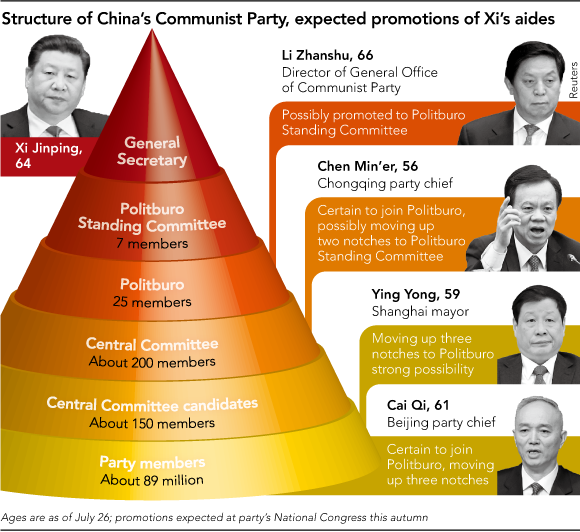 The president offered up the latest reminder of his political strength ahead of a key Communist Party meeting this fall, where a major leadership reshuffle is on the cards. Xi is working to consolidate even more power into his own hands, and his latest efforts are focused on preventing retired party heavyweights from standing in the way of his aides assuming key leadership posts at the 19th National Congress of the Communist Party of China.

BIG DECISIONS Before the autumn gathering, current and retired Communist Party leaders will meet in the seaside resort of Beidaihe to seek consensus on major decisions, including on top appointments, for the party congress. Xi plans to use the annual event to propose reviving the powerful post of party chairman -- which Mao Zedong held for about 30 years until his death -- to further consolidate his power.

Also on the agenda will be a review of the rule that party executives who have turned 68 by the time of the congress should retire. If both proposals are approved, the collective leadership system that has taken root since China began its sweeping reform and opening-up policies will face a major turning point.

Potential Xi rivals continue to fall. The government recently announced that former Chongqing party chief Sun Zhengcai, a rumored possible successor to the president, is under investigation. That a figure seen as having ties to a party elder fell from grace so close to the Beidaihe gathering has sent shock waves through the political elite.

When the roughly 89-million-member party holds its next twice-a-decade congress this fall, some 2,300 delegates will first pick around 200 members and 150 alternate members for the party's Central Committee. The committee will select the Politburo and the Politburo Standing Committee, which currently have 25 and seven members, respectively.

All of these appointments are ostensibly up for a vote. But big decisions are traditionally made in advance by party leaders and elders at Beidaihe. Former presidents Jiang Zemin and Hu Jintao, as well as 20 to 30 others who had been part of the Politburo Standing Committee or held other senior posts, are said to still wield considerable sway over the process.

To deflect criticism of the closed-door process, past congresses have featured a straw poll where current Standing Committee members and party elders vote in advance for their Politburo candidates. While the results are not binding, many believe that the system has allowed elders to remain involved.

Xi is looking to change all this. "The leadership is considering only allowing current and alternate members of the Central Committee to vote in the straw poll," a source familiar with the matter said.

Elders are expected to vehemently oppose the idea, but many question why retired officials should even have a say. Xi appears to be taking heed of such views in the party.

The Chinese leader is also paving the way to place his most trusted aides -- people who have served him since he was just a regional player -- at the top of the party. Politburo member Li Zhanshu is expected to move up to the Standing Committee. Central Committee member Chen Min'er, who replaced Sun as Chongqing's party chief, is a lock to join the Politburo. Some believe that he may even move up two rungs at once, straight to the Standing Committee.

Beijing party chief Cai Qi and Shanghai Mayor Ying Yong are also expected to score Politburo appointments -- an impressive three-rank promotion, given that neither is currently even an alternate for the Central Committee.

Such unorthodox decisions tend to face pushback from party elders. By cracking down on Sun ahead of the Beidaihe meeting and suggesting measures that would weaken elders' influence, Xi is likely trying to deter them from fighting the appointments.

CORPORATE FALLOUT The jostling for power is spilling over into the business arena. Recent crackdowns on five domestic companies appear aimed at clipping the wings of party elders ahead of the Beidaihe gathering. 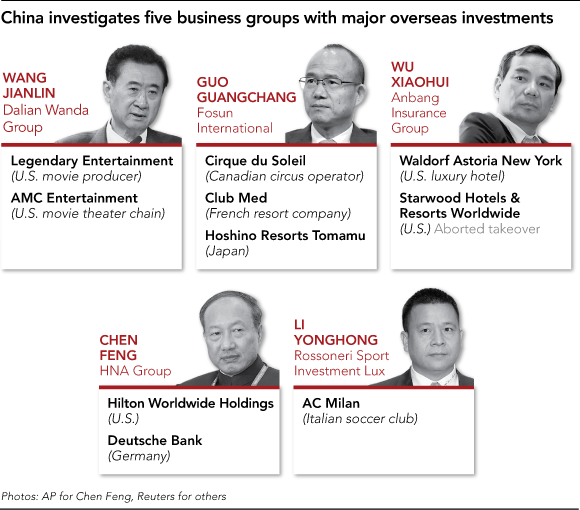 All five businesses have grown rapidly through overseas mergers and acquisitions, and their founders reportedly have ties with prominent families within the party leadership.

Wu Xiaohui, chairman of Anbang Insurance Group, was detained by the authorities on June 9. The following day, the China Insurance Regulatory Commission seized documents in a raid at the Beijing headquarters of the country's top insurance and financial services holding company.

In addition to Anbang, Fosun International, Dalian Wanda Group, HNA Group and an investment company called Rossoneri Sport Investment Lux are being targeted. Most of their founders are reportedly close to "second generation reds," or children of Communist Party leaders who helped found the People's Republic of China in 1949.

The five have all experienced "explosive" growth owing to huge overseas M&As. They are suspected of using their outsize influence to raise large amounts of money from financial institutions and other lenders for their acquisitions.

Wu became an internationally known businessman after announcing Anbang's 2014 acquisition of the Waldorf Astoria New York, a local landmark. He has kept piling on new loans, using assets of acquired companies as security.

His fortunes changed drastically in April, when Xiang Junbo was removed as chairman of the insurance regulatory commission. Xiang had "given Anbang preferential treatment in authorizing acquisitions and other deals," a senior industry official said.

According to a senior local government official, the real reason behind the investigations is to sap the influence of retired party heavyweights before the Beidaihe meeting.

Another businessman being targeted is Wang Jianlin, chairman of the country's largest property developer, Dalian Wanda. As China's richest person with a military background, Wang has used his influence to benefit senior military and government officials through lucrative property and business deals, said a person familiar with the transactions.

Also being investigated is Rossoneri Sport Investment Lux, which made news with its acquisition of the storied Italian soccer club AC Milan.

Then there is HNA. Its senior chairman, Chen Feng, transformed the company from an aviation management business into a conglomerate with assets of 1.2 trillion yuan, repeatedly acquiring companies to amass his fortune.

Chen is an old friend of Wang Qishan, secretary of the Central Commission for Discipline Inspection, the country's anti-corruption agency. He worked for Wang when the latter was chief executive of the Agricultural Investment Trust of China.