As 'core' leader, the president may try to break retirement rules

BEIJING -- In any large organization, the top leader's influence can erode if an heir apparent emerges. The Chinese Communist Party is no exception, but Xi Jinping is now fighting to avoid that fate.

The 63-year-old Chinese president, who also heads the ruling party as general secretary, is facing a moment of truth ahead of a leadership reshuffle this autumn.

The Politburo Standing Committee, the top decision-making body, will change its membership at the party's twice-a-decade national congress. Most of the seven committee members are scheduled to step down, having reached retirement age.

If Xi follows custom, he will have to narrow down his potential successors. That was the case in 2007, when Xi himself emerged as a shoo-in to take over from Hu Jintao as general secretary and president of China.

But 10 years on, the political atmosphere is quite different, and Xi has made no move to choose the next in line from among the younger generation of party leaders. Beijing is festooned with red banners calling on people to rally behind the Communist Party, with Xi as its "core." That designation sets him apart from past leaders, who were merely "first among equals." Xi was named the party's core last autumn.

Premier Li Keqiang delivered a speech in Beijing on March 5 at the opening of the National People's Congress, China's rubber stamp parliament. In his remarks, he repeatedly referred to Xi as the core of the party. 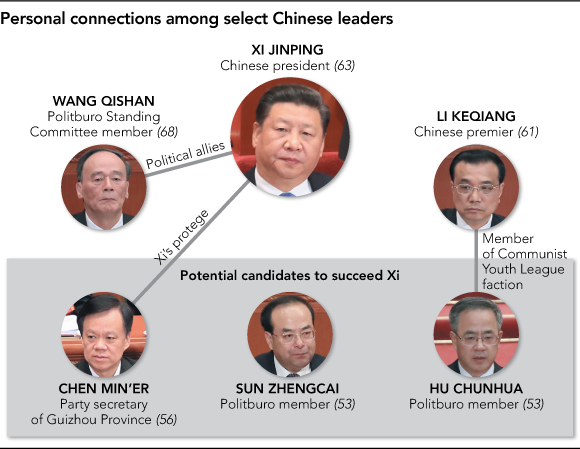 Given the delicate relationship between Xi and Li, there was an interesting scene on the opening day of the annual parliamentary session. Li called out to Xi when they were leaving. By doing so, Li humbly paid his respects to the core leader. But Xi avoided eye contact with Li, replied perfunctorily and left without waiting for him, underscoring Li's subordinate position.

"Now that Xi has won core status, he will continue to play the leading part. He will not specify who will step into his shoes in the future. Instead, he will still make many candidates compete with each other," a party official said. This view is widely shared.

Xi was named general secretary at the party's national congress in the autumn of 2012. He then became president, taking the top government post in the spring of 2013.

In China, leaders are not democratically elected. The law of the jungle prevails in power struggles within the Communist Party. If a top leader is powerful enough, he can break unspoken rules or customs.

Under the Chinese constitution, the president can serve up to two five-year terms. That means Xi must step down by 2023. There are no term limits for the general secretary, but Xi's two immediate predecessors, Jiang Zemin and Hu Jintao, relinquished both their top party and government posts almost simultaneously when they retired.

The retirement age for Politburo Standing Committee members was set at 68 at the party's 2002 national congress. But this is merely customary; there are no official rules on the matter.

Since his inauguration, Xi has used a high-profile anti-corruption campaign as a tool in his struggle with political foes. Having consolidated his power, he now appears poised to extend his reign beyond the party's 2022 national congress.

It is now clear that Xi intends to use the "national supervisory commission," a new, nominally independent institution to be set up next year, to further his political ambitions. The commission will be authorized to crack down further, even on people who are not Communist Party members.

The party's Central Commission for Discipline Inspection has so far served as a command center for the anti-corruption crusade. Many corrupt officials have been netted in the campaign. But the current system, whereby the party cracks down on members first and state and judicial organs move later, is full of contradictions. In addition, the party commission cannot punish outsiders.

The sweeping reform of the state supervisory system could give Xi a convenient excuse to break precedent regarding personnel changes. Wang Qishan, Xi's close political ally and China's top graft buster, will be a main architect of the new commission. He has spearheaded the corruption crackdown as head of the Central Commission for Discipline Inspection.

Wang, now 68, and Xi have been friends since they were boys. Wang is like a big brother to Xi.

Wang has already reached the unofficial party retirement age of 68, but Xi could retain him as a Politburo Standing Committee member beyond 2017 in the name of maintaining momentum in the fight against corruption. One radical idea doing the rounds: Wang could be slotted in as general secretary.

The post envisaged for Wang is similar to the one Deng Xiaoping held in the 1950s, when Mao Zedong, China's revolutionary leader, served as party chairman with unrivaled authority. Deng was merely head of the party secretariat.

In short, promoting Wang to general secretary would be a way to extend Xi's reign beyond 2022. Revisions to party rules this year to revive the post of party chairman would pave the way for Xi to assume that title and serve two five-year terms through 2027.

If Premier Li, now 61, stays on as premier and Wang becomes general secretary of the party, that would create a three-man leadership troika.

The number of Politburo Standing Committee members was reduced from nine to seven at the party's 2012 national congress. Xi might try to cut the number to five this autumn -- the triumvirate and two new faces.

Under the unofficial retirement age system, the current committee members other than Xi and Li are supposed to retire at the party congress this autumn. Wang will be 69 when the congress convenes.

Wang is a veteran politician with a wide network of connections in the financial world and elsewhere in the U.S. Wang's experience may be an asset in dealing with the Trump administration.

To be sure, Xi's bid to keep Wang in the party leadership will face strong resistance from Xi's political foes. But the president has an ace up his sleeve. At Xi's behest, calls may grow within the party to let Wang keep his seat on the Politburo Standing Committee in recognition of his anti-corruption efforts.

Song Ping, 99, the eldest of the party's retirees, recently spoke out, saying, "If people are physically fit, they can do jobs that help others, even if they are between 65 and 75 years old, or even up to 80 years old." Song has a sharp eye for future leaders. He spotted Hu Jintao and Wen Jiabao, and later helped put them on the Politburo Standing Committee.

Hu and Wen eventually served as president and premier, respectively. Song also played a key behind-the-scenes role in Xi Jinping's sudden emergence in 2007 as front-runner to take over from Hu as China's top leader.

If other party elders share Song's view that people can continue to serve at age 75 or even older, keeping Wang on as a standing committee member beyond 2017 will be easy. That, in turn, would open the door to an extended reign by Xi.

Xi's rivals have not been idle. Former President Hu, 74, is still engaged in political maneuvering. In January, Hu made a rare public appearance after months of speculation about his health. He showed up at a flower market in Guangzhou, Guangdong Province. He was accompanied by a protege, Hu Chunhua (no relation), the 53-year-old party secretary of Guangdong. Hu Chunhua is a rising star in the Communist Youth League faction.

That faction, which comprises former officials of the Communist Youth League, the party's massive youth organization, was previously led by Hu Jintao and Premier Li.

The question is whether Hu Jintao will be able to counter Xi's unrivaled power as the core of the party in the tug-of-war over the makeup of the new standing committee this fall. Hu Jintao, who was not a core leader during his time in office, wants to see Hu Chunhua elevated to the standing committee.

Meanwhile, former President Jiang Zemin, 90, who once wielded enormous influence, could be left out in the cold in the current infighting over the committee members.

"Xi probably wants to make three or more candidates, including his protege, compete with each other" in the succession struggle, said one party insider.

Among potential candidates to succeed Xi are Hu Chunhua and his rival, Sun Zhengcai, a 53-year-old senior official in the key city of Chongqing. Both are Politburo members, but they are not close to Xi.

During the annual session of the parliament, Chen Min'er, a 56-year-old top official in Guizhou Province and a Xi protege, drew particularly strong attention. Chen was Xi's subordinate when the latter served as the top official in Zhejiang Province.

In stark contrast with Hu and Sun, who both played it safe, Chen faced the press actively and addressed the issue of poverty eradication on March 6. Progress in the fight against poverty is something Xi wants to highlight as an accomplishment ahead of the party congress.

But Chen is still relatively unknown among China's senior leaders. Unlike Hu and Sun, Chen is not a Politburo member. If Xi wants to see Chen leapfrog on to the standing committee, he will have to push hard. But being a core leader will give him considerable leverage.

"Under the collective leadership system, the Politburo Standing Committee is supposed to make decisions by majority vote. But now the core leader effectively has the final say," said a senior party official.

With more than six months to go before the party congress, the guessing game over the new leadership will intensify.