TOKYO   China's growing economic might is a juggernaut that can roll over almost anyone in an international business. A 16-year-old Taiwan-born girl recently learned that the hard way. 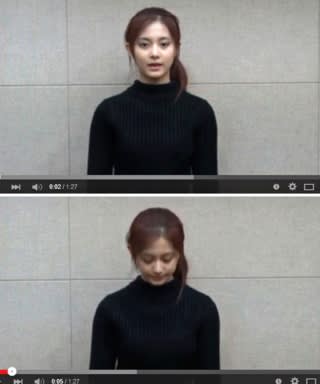 Immediately before voters in Taiwan elected an independence-leaning female president on Jan. 16, a video was posted online in which the girl, dressed in a black sweater, read out a written apology in Chinese and bowed deeply.

"There's only one China," she said in the videotaped apology. "The two sides of the strait are one, and I have always felt proud to be Chinese. ... Again, I apologize to everyone. Sorry."

She is Chou Tzu-yu, a Taiwanese singer and dancer in the popular South Korean girl idol group Twice.

Chou offered the humble apology for just innocently waving the flag of Taiwan while appearing in a South Korean television show last year.

As images of Chou waving the flag recently went viral, she was labeled as a supporter of Taiwan's independence from China. The pop singer and her group faced immediate and serious consequences for rousing the nationalist ire of many Chinese.

A Chinese TV station cancelled a scheduled performance by Twice. There is little doubt that the TV station acted in line with the intentions of the propaganda unit of the Chinese Communist Party. In China, media, the party and the government operate as one.

Chou, who is pursuing her dream in a foreign country, showed the flag only to stress that she is a native of Taiwan. She is not old enough to vote. It is hard even to imagine her being a member of the pro-independence camp as she was painted to be.

But the incident delivered a scare to South Korea's entertainment industry. The country's idol groups and dramas are also popular in China, bringing massive revenues to South Korean talent agencies and music production companies, including JYP Entertainment, with which Chou has signed.

Some South Korean idols are also popular in Taiwan, but the mainland's entertainment market is much bigger and far more lucrative.

JYP Entertainment merely acted in its own business interests when it swiftly posted online the video of Chou apologizing and saying she had decided to terminate her activities in China. The company was trying to limit the financial damage from the controversy.

The 16-year-old girl striving to develop her career as a pop singer in a foreign country unknowingly got caught in the tensions stemming from a complicated web of international relations. Even before understanding fully what was happening, she had to cooperate with her company's damage-control efforts.

JYP Entertainment said it discussed the issue with Chou's parents, who visited South Korea, because she is a minor.

Chou's apology sparked massive outpourings of sympathy in Chinese-speaking regions like Taiwan, Hong Kong and some Southeast Asian countries, attracting even greater public attention in these areas than the Taiwanese presidential election on Jan. 16.

Taiwan's president-elect, Tsai Ing-wen of the pro-independence Democratic Progressive Party, came to the girl's defense, saying she is a citizen of "one Republic of China." "She should not come under pressure for holding the national flag or feeling her national identity," Tsai said.

Chou has captured broad public sympathy in Taiwan. Some analysts say the public uproar provoked by the controversy had an impact on the election, working against the ruling Kuomintang, whose leader and outgoing President Ma Ying-jeou has promoted a pro-China policy and held a historic meeting with Chinese President Xi Jinping last year. The Kuomintang's candidate, Eric Chu, was defeated by Tsai by a large margin.

China, which regards Taiwan as part of its territory, must be feeling displeasure over both the outcome of the island's election and the flag incident.

The Chinese government had been refraining from any attempt to influence the election results because the Kuomintang was widely expected to lose the presidency.

On the same day as the election, Beijing held a lavish ceremony to launch the Asian Infrastructure Investment Bank, a new international development bank created under its initiative.

The ceremony was intended as an opportunity for Xi to draw international attention by celebrating the opening of the bank, which symbolizes China's growing economic clout.

Chinese media played down the importance of the outcome of the Taiwanese election, giving it only limited coverage.

Chinese authorities feared that the election could intensify people's discontent about the fact that they, unlike voters in Taiwan, do not have the right to vote in free elections.

The Chinese government tried to blame the uproar over Chou's apology on the pro-independence camp in Taiwan. An unnamed spokesman of the Taiwan Affairs Office of the State Council was quoted by state-run Xinhua News Agency as saying, "Compatriots on both sides of the strait must be highly vigilant against [political] forces on Taiwan exploiting a handful of incidents in exchanges between the two sides to provoke the feelings of the public on both sides."

CHESS MOVES   In addition to this flag brouhaha, China was recently troubled by North Korean leader Kim Jong Un's decision to cancel, at the last moment, concerts in Beijing by the country's all-female pop group Moranbong Band and his related move to go ahead with what he called a "hydrogen bomb test."

International politics was a key factor behind the developments concerning both girl bands, and these incidents also have significant potential implications for Japan.

The South Korean group Twice has three Japanese performers as members, along with five South Korean girls and the Taiwan-born Chou. This reflects the international expansion of show business in Asia in recent years.

If the Japanese members were to make remarks about politically sensitive issues between Japan and China, such as the territorial dispute over the Senkaku Islands, they could be banned from China's vast entertainment market.

Legendary Entertainment has produced many Hollywood movies, including the Batman film "The Dark Knight," "Jurassic World" and the latest Hollywood adaptation of "Godzilla." The Batman movie takes up the U.S. ideals on justice. It is notable that the Chinese conglomerate has targeted this high-profile film production company.

"Wanda is not the Chinese government, but it certainly acts in accordance with Beijing's intentions," said a Chinese intellectual who often travels to the U.S. "The deal will make it difficult for Hollywood to make films critical of China."

Wanda has already bought AMC Entertainment Holdings, the second-largest movie theater chain in the U.S., for $2.6 billion. The company has thus obtained a significant presence in both the film production and distribution markets in the U.S.

China is pursuing a strategy to promote Chinese culture along with its political agenda overseas through joint public-private efforts.

Despite strained ties with several countries over its naval expansion in the South China Sea, Beijing is steadily boosting its cultural influence abroad.