China's online classes are minefield for censorship amid coronavirus Workers sort textbooks at a warehouse for Xinhua Bookstore, in Fuzhou, Jiangxi Province, on Feb. 17, after students' return to school was delayed due to the new coronavirus outbreak.   © Reuters
COCO LIU and NIKKI SUN, Nikkei staff writersFebruary 27, 2020 18:42 JST | China
CopyCopied

HONG KONG -- China's cyberspace has long been guarded by the country's censors looking to catch anyone who dares to step across strict lines. But as the outbreak of the new coronavirus has forced schools to move their classes online, even those who play by the rules have quickly found themselves not immune from Beijing's tight control over the internet.

Take Zhang, a medical student in Chongqing, for example. Earlier this month, when her professor displayed an image of a woman's reproductive organ to a group of medical students on DingTalk, the livestreaming service was suddenly disrupted, she said.

"The screen of the app turned black and we could not livestream the course," said Zhang, 20 years old, who requested that only her surname be used. While the cause of the disruption remains unclear, Zhang said the commonly accepted explanation is online censorship, noting that images and terms from obstetrics and gynecology stand a high chance of being mistaken as pornography.

"All of us are concerned that our classes will be censored," said Zhang, who hopes to keep up her studies through e-learning amid the epidemic. To navigate through much-anticipated disruptions in the future, Zhang said her class has prepared for playing a game of whack-a-mole with censors following the recent incident on DingTalk.

"We now turn on two livestreaming platforms at the same time," she said. "If one platform fails, we can immediately switch to the other one." 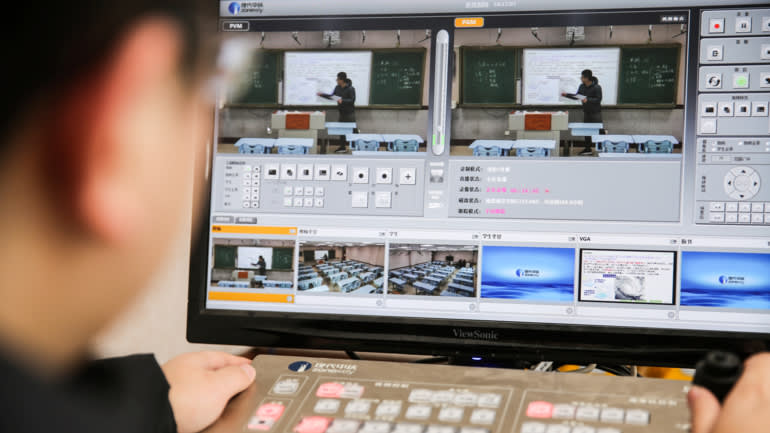 A staff person checks lectures at a school in Qingdao, Shandong Province, in preparation for the postponed spring semester. Many courses, including politics and history, have been blocked by livestreaming platforms.   © Reuters

Chinese authorities last month ordered all classes -- from primary school to university level -- to be held online to avoid the spread of the coronavirus.

Obstetrics and gynecology is not the only subject that is vulnerable to online censorship. Many courses ranging from politics and history to Chinese literature have also been blocked by livestreaming platforms in China in recent weeks, even though teachers have strictly followed textbooks approved by Beijing.

High-school student Xiong Xuyan, from southern Guangdong Province, recently had her history class blocked as soon as the teacher discussed "anti-revisionism" -- a reference to opposition against reforms initiated by communist leaders, like Nikita Khrushchev in the former Soviet Union and Deng Xiaoping in China.

Xiong said her teacher did not even talk about China -- the class was about the history of the Soviet Union. Still, Bilibili, a video-sharing platform that hosts the virtual class, sent a notification saying the class involved "sensitive political matters."

Another high-school student, Cathy, also saw a warning of "violating rules" pop up on the Tencent Class app after a student mentioned the word "bioethics" in a digital class. "I can't stop but wondering what would happen if we teach biological genetic engineering," said the teenager from Suzhou, a city in eastern Jiangsu Province.

Tencent Holdings did not respond to an interview request from the Nikkei Asian Review, nor did Alibaba Group Holding, which operates DingTalk. Bilibili declined to comment on why the streamed courses were blocked.

"It is not surprising, because many of the censorships are based on keywords, regardless of the context," said Shan Wei, a research fellow specializing in Chinese politics at the National University of Singapore, explaining why the government-approved teaching materials ended up being censored online. A teacher records lessons in Hunan Province. While most students and teachers have not seen interruptions until recently, the practice of censorship in online education was put in place long before the coronavirus outbreak.   © Reuters

That full list is hard to come by, but discussing current affairs in online classes apparently is off limits.

According to a screenshot of a notification Bilibili sent to the teacher, which was seen by Nikkei, a Chinese literature class livestreamed by a high school teacher in Guangzhou was blocked on Bilibili due to "violation of the rules."

The violation? The teacher was speaking of "Wuhan officials" when the service was abruptly cut, according to a student in the class. The coronavirus was first detected in Wuhan in December.

While most students and teachers in China have not experienced such interruptions until recently, the practice of censorship in online education was put in place long before the coronavirus outbreak.

A lecturer who teaches political philosophy at a Beijing-based e-learning startup told Nikkei that last year he failed to upload one of his prerecorded videos to CCtalk, a specialized online education platform.

"The platform administer told me the video was blocked because I talked about state leaders in that video," the teacher said. "I only mentioned that Xi was powerful," he said, referring to Chinese President Xi Jinping.

The teacher later deleted the part concerning Xi, and the video was then successfully uploaded. CCtalk did not respond to Nikkei's request for comment. Barricades block the entrance to a school in Wuhan. "When it comes to China, I just avoid talking about anything that happened after 1911," says the founder of an online educational app.   © Reuters

As the reopening of campuses is nowhere in sight, some teachers have started to learn how to live with the new realities.

A middle-school teacher in the eastern city of Yangzhou said that while no classes at her school had been blocked, her colleagues wanted to be proactive, so they have been collecting examples of censored classes from Chinese social media and reminding each other of avoiding certain topics.

"Basically, topics like genitals, sex education, and the Cultural Revolution are suggested to be avoided at our online classes," the teacher said, although those subjects are part of mandatory courses in China.

To be sure, not all classes involving sensitive words or terms have been censored.

"Different platforms may implement censorship at a varying degree," said Shan, of the National University of Singapore. As he explains, internet giants with strong financial resources may hire an army of in-house censors to assess all the content and handpick the ones that will upset Beijing, while smaller companies may simply delete anything with highly risky words.

"Internet companies with stronger political connections may have more leeway in their enforcement of censorship," Shan said.

The founder of a Chinese educational app told Nikkei that the relationship with livestreaming platforms also matters, as some platforms will relax their control over courses submitted by deep-pocketed educational institutes, but course providers still have to embrace self-censorship.

His company's e-learning platform includes courses as sensitive as liberalism, but he has a trick for survival.

"When it comes to China, I just avoid talking about anything that happened after 1911," he said, the year the imperial dynasty was overthrown and the beginning of Chinese modern history.