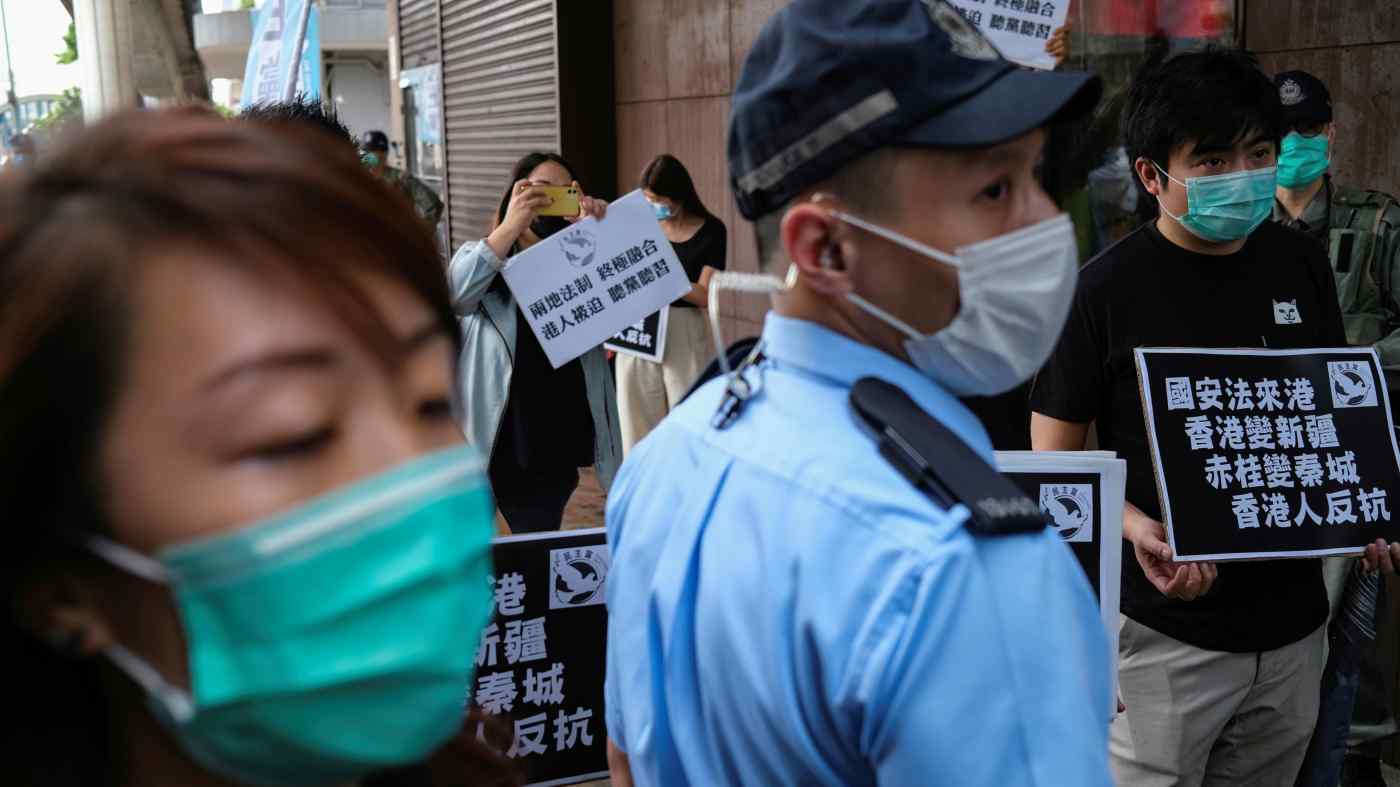 HONG KONG -- Seventeen years after half a million street protesters in Hong Kong forced the government to shelve a proposed national security bill, Beijing this week introduced an even stronger proposal.

This time, however, it will not need a nod from local citizens or lawmakers, as mainland Chinese authorities are running out of patience after monthslong anti-government protests, which have greatly tarnished Beijing's carefully managed international image.

As the world weighs the impact of the proposal on the "one country, two systems" framework that underpins life and business in the Asian hub, here are five things you need to know.

What exactly is in the national security bill?

The draft legislation would pave the way for Beijing to set up national security institutions in Hong Kong. It is largely seen as a replacement of the controversial national security law, Article 23, which was suspended after the massive protest in 2003.

But unlike Article 23, which requires local legislation, the new national security law proposal would bypass Hong Kong's Legislative Council, the equivalent of the city's parliament, where meetings have been frequently interrupted by filibustering instigated by pro-democracy lawmakers. Instead, it will be included as an annex to the Basic Law, the city's mini-constitution.

The new proposal targets activities such as "splitting the country, subverting state power," as well as terrorism and foreign interference in Hong Kong. Anti-government demonstrators in Hong Kong have been referred to as terrorists by some mainland officials.

Wang Chen, vice chairman of the standing committee of the National People's Congress, which is in session until Tuesday, said on Friday that Article 23 had been "demonized" by people "with ulterior motives." Wang added that "new problems and challenges" had prompted Beijing to push the legislation at the national level instead of relying on Hong Kong to enact its own national security law.

Why is the law being proposed now?

Beijing's timing has raised questions among many in Hong Kong. Some say it was chosen to minimize global attention as the world -- in particular the U.S. and Britain, the primary supporters of Hong Kong's pro-democracy movement -- is preoccupied with containing the coronavirus pandemic. Another factor in the decision may be that Hong Kong is unlikely to see a return of large-scale protests while social-distancing rules remain in place, although flare-ups of unrest are possible.

Analysts say the move shows Beijing has lost confidence in the ability of pro-establishment Hong Kong lawmakers to push through controversial legislation since that side suffered a major setback during last November's district council elections. Pro-Beijing parties also are not expected to claim a big win in the upcoming vote for the Legislative Council in September.

What has been the reaction in Hong Kong?

Investors sold off stocks, with the benchmark Hang Seng Index tumbling 5.6% on Friday, the day that Beijing formally proposed the national security legislation. It was the biggest one-day decline in nearly five years. Property developers, whose assets are heavily concentrated in the city, took the biggest hit. Real estate stocks slumped 7.7%.

Meanwhile, Google searches in Hong Kong for emigration to other countries spiked shortly after news of the law first broke. According to Google Trends, the Chinese word for "immigration" reached the highest popularity reading -- 100 -- on Thursday night, in what appears to be a reflection of concerns over diminishing democratic freedoms in Hong Kong.

Downloads of virtual private networks, which are widely used to bypass internet restrictions and disguise digital footprints, also surged in Hong Kong. NordVPN, a popular provider, said it handled 120 times more downloads on Thursday than on the previous day, while rival Surfshark reported a 700% rise in Hong Kong sales on Friday morning.

What is Washington's position on the issue?

China has frequently condemned what it describes as foreign interference in its domestic matters. In particular, Beijing has singled out Washington as a driving force behind street protests in Hong Kong.

Two members of the U.S. Congress quickly responded to the latest developments by proposing a bipartisan bill that would essentially sanction any Chinese officials who enforce the proposed national security law. The measure would impose sanctions on people or entities that violate China's legal obligations to Hong Kong under the Basic Law, as well as on banks that do "significant transactions" with them.

Last year, amid some of the most violent demonstrations in Hong Kong, Congress overwhelming passed -- and President Donald Trump signed into law -- the Hong Kong Human Rights and Democracy Act of 2019. The law calls for mandatory sanctions on Chinese officials found responsible for human rights violations, and requires the State Department to annually review Hong Kong's special status, which awards it preferential trade treatment.

Pro-democracy lawmaker Dennis Kwok said enacting Beijing's proposed national security law would mean "the end of one country, two systems." The law, potentially allowing Beijing to arrest anyone whom it deems as a threat to national security, could lead to restrictions on free speech and prompt media as well as individuals to adopt self-censorship. In an extreme scenario, opposition broadcasters and newspapers could face closure, while pro-democracy politicians and activists could be imprisoned.

Such moves would take a toll on the city's status as a rule-of-law international financial hub -- the free flow of information is vital to Hong Kong's economic success. If foreign investors' confidence dwindles, hundreds of multinational corporations headquartered in Hong Kong could consider relocating elsewhere in Asia, posing a risk to the city's long-term prosperity. Social instability could also push expatriates and local professionals to seek job opportunities elsewhere, leading to brain drain.