KUALA LUMPUR -- China is finding that nobody likes a pushy neighbor. Beijing's aggressive posturing in the South China Sea, where it is nursing territorial disputes with multiple Southeast Asian nations, is stirring up particular resentment in the region -- and pushing more countries into the waiting arms of the U.S.

Malaysia has traditionally kept the U.S. at arm's length, but recent years have seen a gradual increase in military cooperation between the two countries. In one of the most notable developments, the U.S.'s state-of-the-art P-8 maritime surveillance aircraft has been landing and refueling at Malaysian bases along the South China Sea.

Malaysia quietly started allowing the U.S. military to use two of its bases in the second half of last year, multiple ASEAN officials revealed. Under the arrangement, the U.S. must obtain permission for each P-8 flight, and any information gathered from the reconnaissance missions is shared with Malaysia, according to the officials. 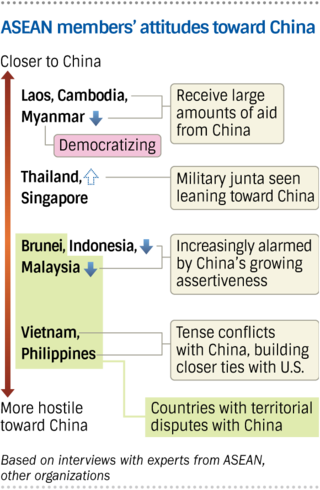 "The cooperation with the U.S. military has not been announced, but, of course, China must have noticed," one of the ASEAN officials said. "Malaysia knows full well that helping the U.S. will invite a backlash from China."

Previously, Malaysia took great pains to strike a conciliatory tone with China, even when disputing territorial issues, according to an ASEAN official. This was in marked contrast to the Philippines and Vietnam, two ASEAN members who have been much more vocal in their disputes with China.

Malaysia felt more progress could be made through quiet, behind-the-scenes negotiations rather than by clashing openly with Beijing, one Malaysian official explained. Moreover, the official added, China had not provoked Malaysia militarily as much as it had the Philippines and Vietnam.

But as Beijing stepped up its maritime posturing, alarm bells started ringing in Kuala Lumpur.

Chinese vessels crossed into Malaysia's exclusive economic zone 35 times between 2008 and 2012, according to the Malaysian authorities. In 2013, the Chinese navy conducted a drill off the Malaysian coast, followed by another in spring 2014. Matters escalated even further this past June when a Chinese patrol ship showed up in Malaysia's coastal waters, leading to a direct confrontation with a Malaysian naval ship that had been dispatched to the area in response.

To curb this increasing assertiveness, the Malaysian government began granting the U.S. Navy greater access to its ports. In 2003, U.S. naval ships were allowed to dock in Malaysia only six time. That number has been four to five times higher since 2012.

In addition to indirectly supporting American military activities in the region, Malaysia has also decided to set up a naval base on its South China Sea coast and create a landing force.

"Already, there are more people within the Malaysian government expressing doubt about the current soft approach," said Shahriman Lockman, a senior analyst at the Institute of Strategic & International Studies Malaysia. "At the same time, very few people can offer a good alternative. I would expect that Malaysia will do things very, very quietly with countries such as U.S., Japan and India."

A shift in Malaysia's stance could significantly alter ASEAN's relationship with the world's second-largest economy.

The bloc's members can be divided into three groups based on their attitude toward China. The first, consisting of the Philippines and Vietnam, takes a hardline stance, while the second group, including Cambodia and Laos, is pro-China. Malaysia, Indonesia and Thailand belong to the third group, whose sentiment toward Beijing is more or less neutral.

The third group holds particular sway within the bloc, and their stance could serve to tip the diplomatic scales in the U.S.'s favor. In addition to Malaysia, Indonesia also merits close attention, since it accounts for roughly 40% of ASEAN's entire population.

Indonesia has remained largely neutral toward China -- unlike Malaysia, the Philippines, Vietnam and Brunei, it is not engaged in territorial disputes with China over the Spratly Islands. Nevertheless, Jakarta has been increasingly on guard since Chinese ships started appearing near the Natuna Islands over the past couple of years. No dispute over the Indonesian territory has yet broken out, but the islands contain rich natural gas reserves.

It was against this backdrop that the country's military carried out a reconnaissance drill with U.S. forces this past April. A joint landing exercise followed in August.

"We would like to hold joint drills with the U.S. military more regularly," an Indonesian navy official said.

The navy also plans to beef up one of its bases near the Natuna Islands.

Rizal Sukma, executive director of Indonesia's Center for Strategic and International Studies, said there is a significant gap between what the country needs and what it actually has in terms of naval power. Sukma, who advises President Joko Widodo on diplomatic matters, said Indonesia aims to rectify that deficiency.

Meanwhile, Thailand, another country in the third group, is showing signs of leaning toward China. The ASEAN heavyweight was hit with sanctions from the U.S. and other countries following the military coup in 2014, and the Thai junta is reportedly considering purchasing submarines from China.

Which way ASEAN swings will be a key factor in determining who eventually holds sway in Asia. Considering that nearly half the crude oil and liquefied natural gas shipped around the globe travels through or near the South China Sea, developments in these waters will likely be felt far beyond the region's borders.