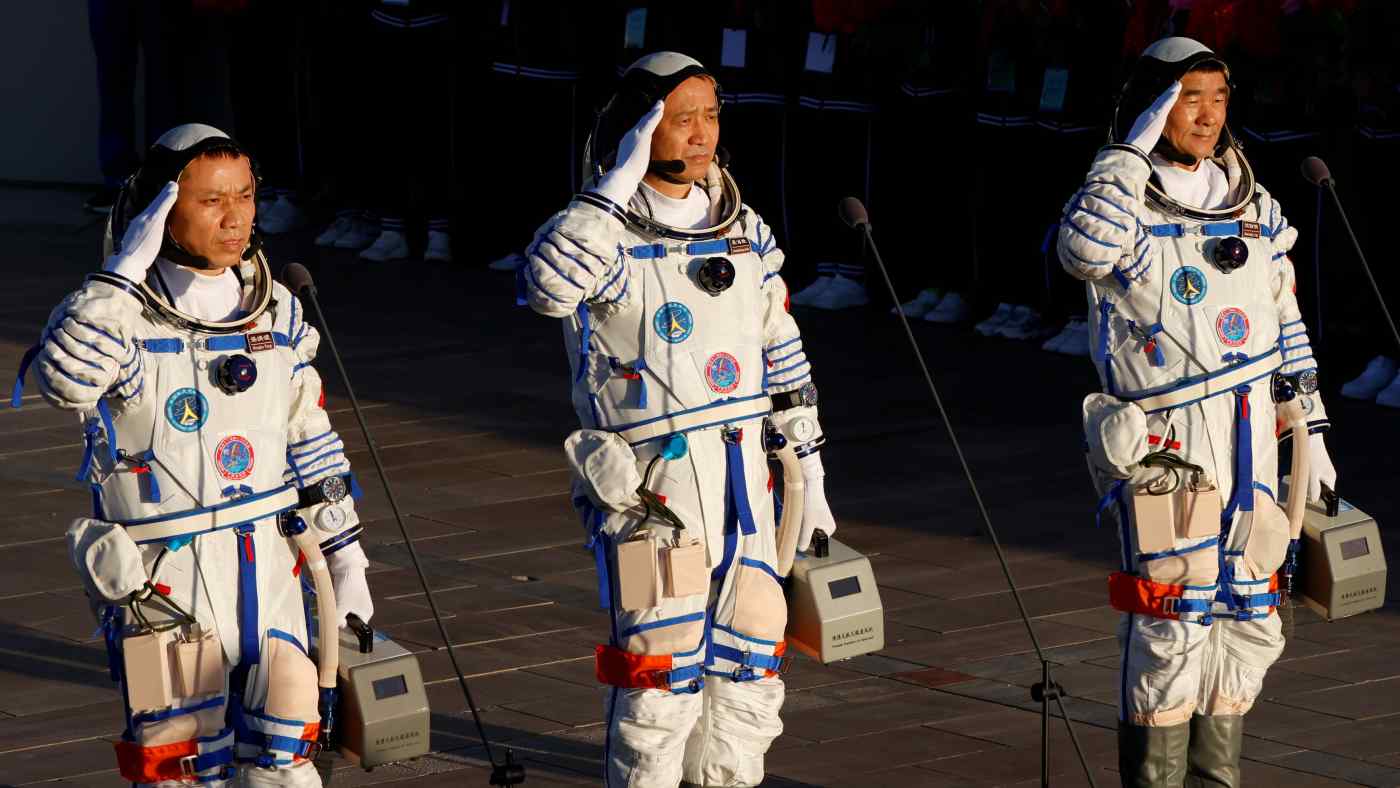 SHANGHAI -- China launched a spacecraft on Thursday carrying three astronauts on a mission to construct its maiden space station.

At about 4 p.m., state media reported that the craft had successfully docked with the core capsule of the space station, which was launched in April.

The manned mission, China's seventh since 2003, is scheduled to last three months. During that time the three male crew members will walk in space, test equipment and maintain the nascent structure to lay the foundation for longer stays of up to six months, the China Manned Space Agency said on Wednesday.

This is the third of 11 missions planned for the construction of the 90-metric-ton T-shaped space station called Tiangong, or Heavenly Palace. China last month sent an unmanned cargo ship to dock with the core capsule.

Upon completion, expected next year, Tiangong will be the second space station in orbit -- along with the NASA-led but multinational International Space Station, which is nearing the end of its working life.

Since 2011, China has been shut out of the International Space Station by the U.S., over concerns about technology transfers. Beijing has made space exploration a priority, as part of its broader ambition to achieve self-reliance in science and innovation.

The Tiangong project is expected to give China a continuous presence in orbit for years to come. Tiangong itself will have an operational life span of 15 years. Given the aging of the International Space Station, China could become the only nation with a space station in the future. Beijing says it is open to international cooperation and willing to host foreign astronauts on joint missions.

Thursday's crewed mission is led by Nie Haisheng, a veteran of two prior space trips. He is being assisted by Liu Boming, also an experienced astronaut with one previous flight, and Tang Hongbo, who is on his first mission. All three are attached to the People's Liberation Army's astronaut team.

The launch was broadcast live on Chinese national television and social media, attracting millions of viewers.

"China's aerospace is looking good, getting better," one person commented on the Chinese microblogging site Weibo, ahead of the launch.

In another milestone for China's space program, the authorities last week released new images captured by its Mars rover, which is currently exploring the surface of the red planet. The probe marked "new breakthroughs," the authorities said after the 240 kg rover successfully completed the interplanetary flight and made a soft landing.

As for the space station, "China's manned space mission has always been guided by the principles of peaceful utilization, mutual benefit and common development," Ji Qiming, an official at the China Manned Space Agency, told reporters on Wednesday.

China "is ready to work with all countries that are committed to the peaceful use of the outer space to carry out international cooperation and exchanges."

The country's space development is in lock step with the People's Liberation Army. The three spacecraft crew members are all former PLA Air Force pilots. Such key space technologies as booster rockets and core space station facilities are produced by state-owned enterprises, known as military-industrial complex companies, under the State Administration for Science, Technology and Industry for National Defense.

The Chinese Communist Party marks the 100th year from its founding in July. The launching of the spaceship and the construction of a space station, following the successful landing of its Mars rover, will help lift national pride.

China's space program has raised international concerns as well. As it launches rockets as frequently as the U.S., debris from Chinese rockets has fallen into the Indian Ocean, prompting criticism from the Biden administration.