A communique released at the four-day, closed-door meeting called for a legal and justice system that protects national security. This is thought to be a message that the party could back laws to prevent vandalism and provide support to Hong Kong's overstretched police force.

But there was limited debate on the country's slumping economy, and the party did not offer clues on how it would handle trade tensions with the U.S.

While the document expressed a commitment to the "one country, two systems" principle that allows Hong Kong a degree of autonomy, it stressed that Beijing would strengthen its oversight of the city. It did not make any mention of Hongkongers governing Hong Kong, which is one of the five demands made by protesters.

Xi has maintained a tough stance on Hong Kong since becoming the party's general secretary in 2012. His policies have in effect undermined the city's semi-autonomous status, and led to the Umbrella Movement in 2014 as well as the current protests. He is likely doubling down to dispel concerns within the party about his ability to handle Hong Kong.

Increasingly violent protests and destruction in the city is also emboldening Beijing, which wrapped up events to commemorate the 70th anniversary of the People's Republic earlier this month. But responding too harshly could further inflame the protests and open Beijing to further international criticism. 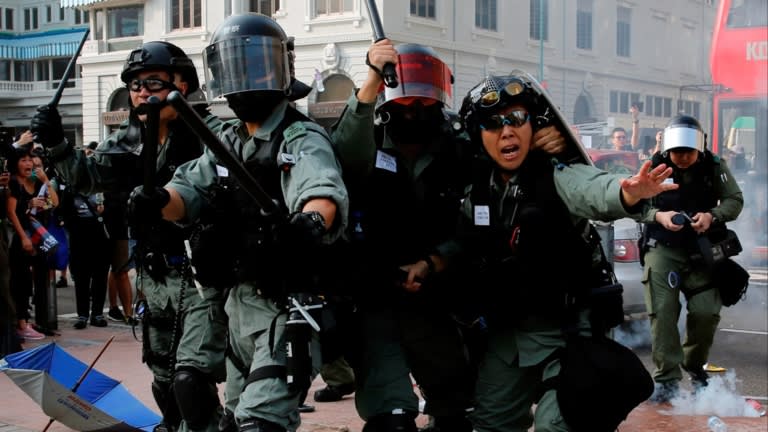 Riot police stand off with anti-government protesters in Hong Kong on Oct. 27.   © Reuters

Meanwhile, the meeting largely procrastinated on economic policy. China usually plans its medium- to long-term economic policies the year after the party congress held every five years. Xi followed this tradition in his first term, but never held the expected planning meeting last fall. Little headway was made at the plenary as well.

Much of China's current economic woes stem from its trade war with the U.S., as Beijing continues to reject Washington's demands to reform state-run companies and industrial subsidies. "A comprehensive trade agreement seems unlikely in the short term," said Zhang Bin of the Chinese Academy of Social Sciences.

Reluctance to implement these changes would only hinder trade negotiations with the U.S. But accepting them would trigger criticism at home for bowing to U.S. demands. Xi is likely struggling to craft an economic blueprint that is palatable for both sides.

Xi had already unveiled a set of market reforms at the third plenary session in 2013, but few have become reality. For example, he promised a new real estate tax designed to discourage speculative condominium purchases and pad local government coffers, but a bill has yet to be released publicly. A change that would allow companies to register for a stock market debut rather than seek formal approval continues to be postponed.

"Trade frictions with the U.S. will be a good opportunity to correct structural problems caused by distorted policies," Zhang said. The reforms proposed in 2013 will be a crucial test for Xi, who is almost halfway through his second term.

No major changes to party leadership were announced at the plenary, despite earlier speculation that Xi could add two new officials to the seven-member Politburo Standing Committee. Many believed Chongqing Party Secretary Chen Min'er and Vice Premier Hu Chunhua would join the top decision-making body so they could be groomed as potential successors to Xi.

But it appears Xi will maintain his iron grip on power for some time yet. The party scrapped term limits for the president last year. Members have likely agreed to unite behind its leader as China weathers unprecedented challenges.