Hundreds in Henan Province complain of being unable to withdraw funds 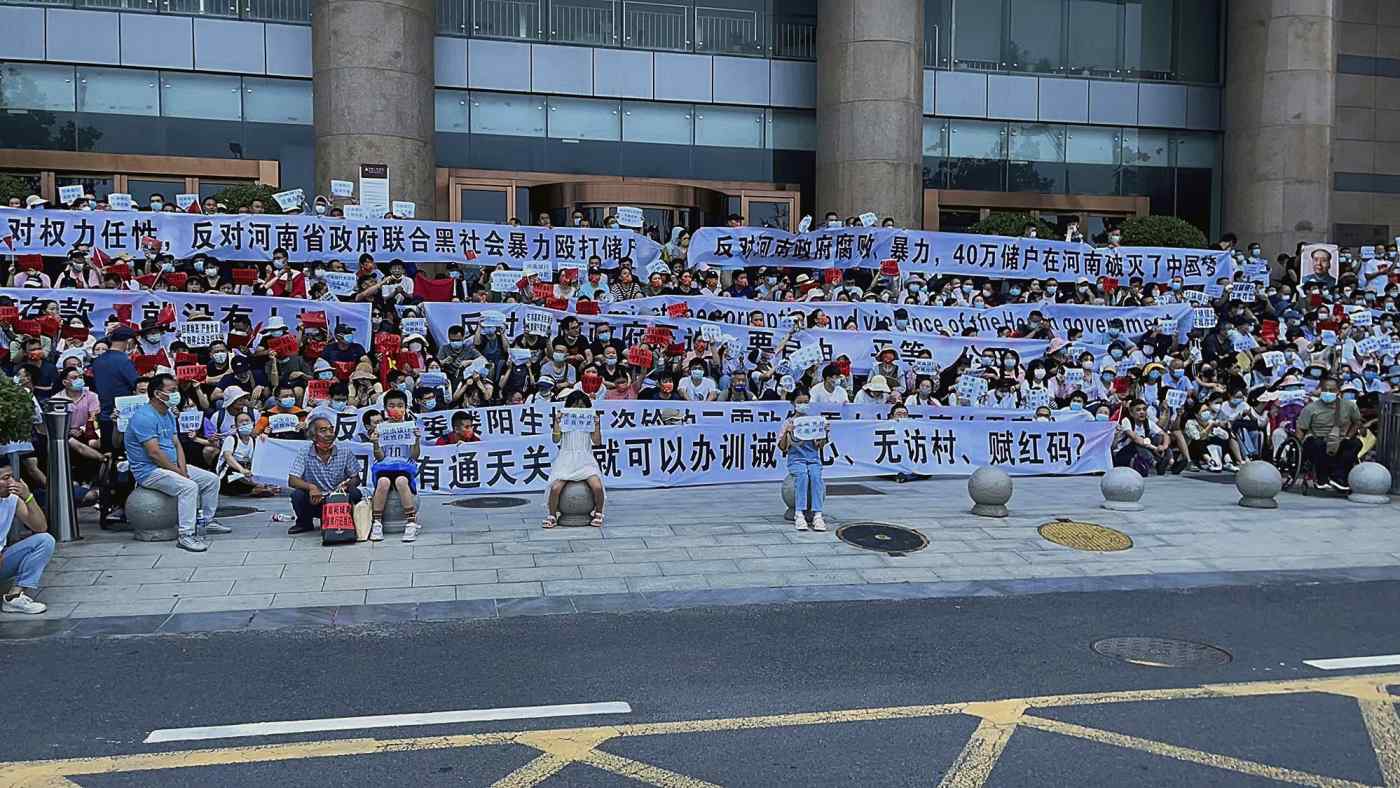 People hold banners and chant slogans during a protest at the entrance to a branch of China's central bank in Zhengzhou, in central China's Henan Province.   © AP
July 11, 2022 09:04 JST | China
CopyCopied

BEIJING (AP) -- A large crowd of angry Chinese bank depositors faced off with police Sunday, some roughed up as they were taken away, in a case that has drawn attention because of earlier attempts to use a COVID-19 tracking app to prevent them from mobilizing.

Hundreds of people held up banners and chanted slogans on the wide steps of the entrance to a branch of China's central bank in the city of Zhengzhou, Henan Province, about 620 km southwest of Beijing. Video taken by a protester shows plainclothes security teams being pelted with water bottles and other objects as they charge the crowd.

The protesters are among thousands of customers who opened accounts at six rural banks in Henan and neighboring Anhui Province that offered higher interest rates. They later found they could not withdraw their funds after media reports that the head of the banks' parent company was on the run and wanted for financial crimes.

"We came today and wanted to get our savings back, because I have elderly people and children at home, and the inability to withdraw savings has seriously affected my life," said a woman from Shandong Province, who only gave her last name, Zhang, out of fear of retribution.

What had been a local scandal became a national incident last month because of the misuse of the COVID-19 tracking app. Many who set out for Zhengzhou to demand action from regulators found that their health status on the app had turned red, preventing them from traveling. Some reported being questioned by police after checking into their hotel about why they had come to the city. Five Zhengzhou officials were later punished.

The protesters assembled before dawn on Sunday in front of the People's Bank of China building in Zhengzhou. Police vehicles with flashing lights can be seen in videos taken in the early morning darkness. Police closed off the street and by 8 a.m. had started massing on the other side, Zhang said.

Besides uniformed police, there were the teams of men in plain T-shirts. A banking regulator and a local government official arrived, but their attempts to talk to the crowd were shouted down. Zhang and another protester, a man from Beijing surnamed Yang, told the AP the protesters had heard from the officials before and don't believe what they say. Yang declined to be identified by his full name, fearing pressure from authorities.

The police then announced to the protesters from a vehicle with a megaphone that they were an illegal assembly and would be detained and fined if they didn't leave. Around 10 a.m., the men in T-shirts rushed the crowd and dispersed them. Zhang said she saw women dragged down the stairs of the bank entrance.

Zhang herself was hit, and said she asked the officer, "Why did you hit me?" According to her, he responded: "What's wrong with beating you?"

Yang said he was hit by two security officers including one who had fallen off the stairs and mistakenly thought in the chaos that Yang had hit or pushed him.

"Although repeated protests and demonstrations don't necessarily have a big impact, I think it is still helpful if more people get to know about us and understand or sympathize with us," Yang said. "Each time you do it, you might make a difference. Although you will get hit, they can't really do anything to you, right?"

The protesters were bused to various sites where Zhang said they were forced to sign a letter guaranteeing they would not gather anymore.

Late Sunday, Henan banking regulators posted a short notice on their website saying that authorities are speeding up the verification of customer funds in four of the banks and the formulation of a plan to resolve the situation to protect the rights and interests of the public.