HONG KONG -- Chinese officials vowed on Monday to press on with remaking Hong Kong, declaring the national security law Beijing imposed on the former British colony a year ago a success.

"This is a long and arduous task, and there is still plenty of work to be done," said Chen Dong, vice director of Beijing's official representative office in the city, at a Hong Kong Department of Justice forum on the security law. "There needs to be a clear understanding as forces that are anti-Chinese and trying to sow trouble in Hong Kong have not completely given up."

Chen warned specifically about "lone wolf-type attacks" by radical elements, following an incident last week where a man stabbed a Hong Kong policeman then himself. Chen condemned what he called the "beautification" of such events by parties with ulterior motives, including foreign forces "rashly and wantonly interfering in Hong Kong's affairs."

Neither Chen nor other Chinese officials hinted at what more may be to come.

The past month has seen Apple Daily, one of the city's top-selling newspapers, forced to close after the arrest of top managers and the freezing of its bank accounts based on alleged security law violations, as well as the launch of security law-based movie censorship, the disbanding of groups for pro-democracy lawyers and doctors and the detention of residents for "seditious stickers" and banners outside their homes.

About 120 people have been arrested under the security law since it came into effect on June 30, 2020, instituting penalties of up to life imprisonment for separatism, subversion, terrorism and collusion with foreign forces. In the first trial under the security law, now underway, Tong Ying-kit faces charges of inciting separatism and terrorism for driving his motorbike into police lines while flying a flag emblazoned, "Liberate Hong Kong, revolution of our times." 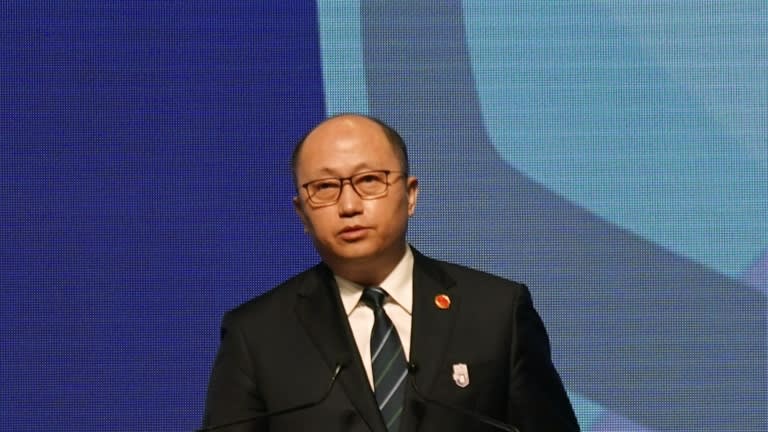 "Safeguarding national security in Hong Kong is precisely the bottom line that we absolutely cannot yield in the road to the great revival of the Chinese race," he said. He alleged Western governments have been seeking to "block the great revival of the Chinese race" and "inspire a Hong Kong version of color revolution," referring to the popular uprisings that toppled several authoritarian regimes in the Middle East a decade ago.

Zheng said there can be "no compromise or mollification" with those threatening China's security under the guise of promoting democracy and civic freedoms in Hong Kong, as he said occurred with the 2019 anti-government protests in the city.

"We cannot have any illusions and give any opportunity that can be exploited by them," said Zheng. "There is only struggle and only punishing them by law, and there is no other way."

Speaking later at the forum, Hong Kong officials vowed to do their part.

"We must think ahead and be preemptive to prevent any acts that endanger national security," he added, saying that last week's stabbing incident showed "risks to national security are lurking."

Secretary of Security Chris Tang agreed that officials "must not lower our guard when it comes to protecting national security," warning of those who "continue to abuse the media, arts and cultural forces to spread their ideologies."

He made no mention of specific further actions, but along with Lee, Tang, then police commissioner, helped lead last month's drive against Apple Daily. He, however, criticized those "using journalism to work with foreign forces to threaten national security."

Looking at the security law from the outside, Johannes Chan, chair professor of public law at the University of Hong Kong, said, "We have two forms of parallel criminal systems, one for NSL offenses and [one for] the others."

Speaking at a security law forum sponsored by his university's law school last week, Chan said that the new procedures are also being used for cases being prosecuted under other laws linked "by analogy to NSL."