BEIJING -- China boasts the world's largest number of international tourists, with nearly 130 million traveling abroad this year. Their appetite for shopping is happily recognized as nearly insatiable, so most countries welcome them and their free-spending ways. 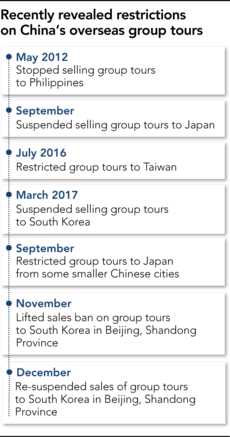 Beijing has taken notice, and is using the economic clout of its overseas adventurers as a way of flexing its diplomatic muscle. Quietly, and without attracting criticism from abroad, the government selectively imposes bans on overseas travel by groups to countries that may have temporarily fallen out of favor with Beijing.