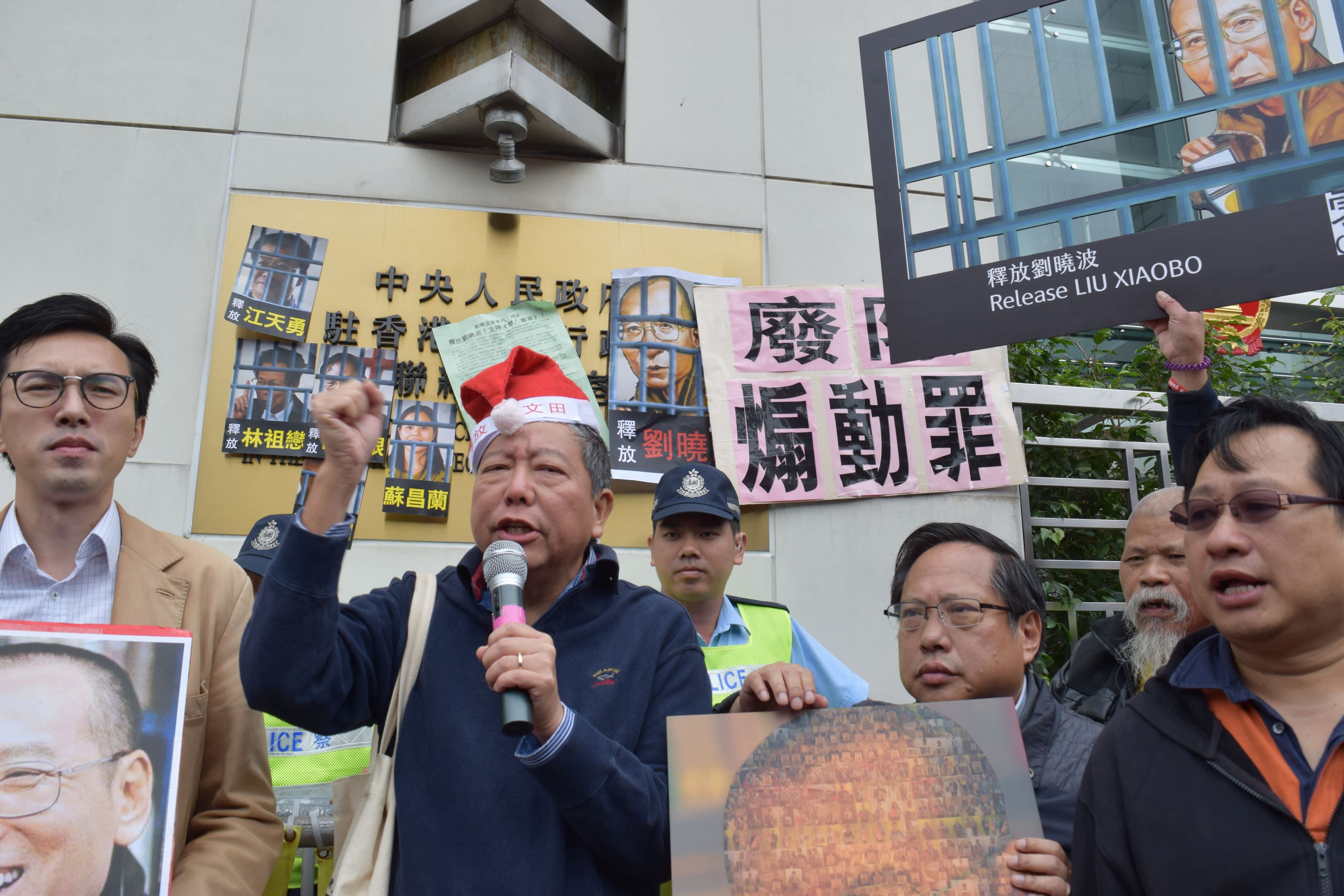 Albert Ho Chun-yan, chairman of the Hong Kong Alliance in Support of Patriotic Democratic Movement in China, third from right, and Lee Cheuk-yan, a longtime activist on human rights in China, second from left, protested in Hong Kong on behalf of Liu Xiaobo and other dissidents at the representative office of Beijing on Sunday. (Photo by Kenji Kawase)
KENJI KAWASE, Nikkei deputy editorDecember 25, 2016 21:00 JST | China
CopyCopied

HONG KONG -- Christmas is a time of joy for many, even in predominantly non-Christian regions in Asia as religious connotations have been diluted over the years. Even in mainland China under Communist Party control, Christmas is about shopping, dining, partying and gathering with family and friends.

But seven years ago today, Beijing Municipal No. 1 Intermediate People's Court handed down a sentence of 11 years imprisonment and two additional years of political rights deprivation to activist Liu Xiaobo for "inciting subversion of state power."

Liu was awarded the Nobel Peace Prize the following year, but his prize went uncollected in Norway, as he was locked up behind bars and his wife Liu Xia was put under house arrest. This was the first time since German journalist Carl von Ossietzky was blocked by the Nazi regime in 1936 from going to the Nobel ceremony in Oslo that a winner had gone unrepresented.

The awarding of the prize infuriated the Chinese, resulting in a virtual cut off of official diplomatic relations with Norway. There was a clear decline in exports of salmon, a major product of the Scandinavian country, to mainland China. According to Norwegian data, exports of whole salmon fell from over 1 million kilograms in December 2010 to around 315,000 kg in January 2011 and 75,000 kg in February.

On this Christmas Sunday in Hong Kong, local activists and supporters of Liu Xiaobo marched to the official representative office of the Beijing government to protest his continued detention. Along with the release of the Nobel Peace laureate, demonstrators demanded an immediate end to the house arrest of his wife and that of the persecution of other dissidents, such as rights lawyer Jiang Tianyong, former Wukan village chief Lin Zulian, Beijing-based activist Hu Shigen and others detained just for speaking up.

Outside the main gate of the representative office, the protesters posted portraits of dissidents and a statement demanding the abolition of the laws that enable the Chinese authorities to lock these dissidents up. However, the office was closed, tightly guarded by police and no one came out to respond to the protesters.

Albert Ho Chun-yan, chairman of the Hong Kong Alliance in Support of Patriotic Democratic Movement in China, told reporters after the demonstration that even though China looks powerful on the surface, "It appears to be so paranoid and so frightened in hearing dissenting voices."

Locking up more and more non-violent people asking for the recognition of basic rights indicates the "inside is weak and maybe quite fragile," he said.

Liu Xiaobo, a literary critic, poet, and a university lecturer, was not an armed terrorist. He was convicted of masterminding and drafting a political manifesto, called Charter 08 in 2008. The document, modeled after Charter 77 which was issued in 1977 in communist-ruled Czechoslovakia by dissidents including playwright and later president Vaclav Havel, called for the rule of law, respect for human rights, and an end to one-party rule in China on the 60th anniversary of the promulgation of the Universal Declaration of Human Rights.

What Liu did was express his views peacefully, which is supposed to be allowed under the Chinese constitution. Article 35 clearly stipulates that citizens "enjoy freedom of speech, of the press, of assembly, of association, of procession and of demonstration," while Article 41 spells out that citizens "have the right to criticize and make suggestions to any state organ or functionary." As the Norwegian Nobel Committee wrote in the statement awarding him the prize, Liu was "sentenced for the crime of speaking." 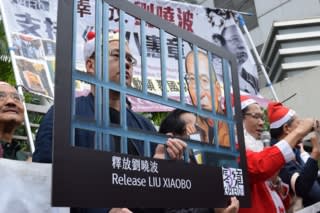 At the seventh anniversary of his sentencing, Hong Kong activists once again demanded the immediate release of Liu Xiaobo, the only Nobel Peace Prize laureate locked behind bars, and other dissidents. (Photo by Kenji Kawase)

However, the seventh anniversary of this event arrived this month just a few days after a surprise rapprochement between Norway and China. During an unannounced visit by Norwegian Foreign Minister Borge Brende to Beijing, the two governments on Dec. 19 announced a normalization of bilateral relations which has been strained since the committee in Oslo conferred the prize to Liu. Even though the committee is independent from the Norwegian government, China had cut off official ties anyway.

The two government's joint statement acknowledged the deterioration in the bilateral relationship had been "due to the Nobel Peace Prize award and events connected to the prize." It added, "The Norwegian side is fully conscious of the position and concerns of the Chinese side and has worked actively to bring the bilateral relations back to the right track."

The Norwegian part of the statement also conceded that Oslo "fully respects China's development path and social system" and highly commended its "historic and unparalleled development that has taken place." While Norway went further to please Beijing by reiterating "its commitment to the one-China policy," there was no mention about the promotion of human rights and democratic principles which is supposed to be "at the heart of Norwegian foreign policy" according to the government's official website. After the meeting with Brende in Beijing, Chinese Foreign Minister Wang Yi said that the Norwegian side went through "profound self-examination on the cause of ruining mutual trust," according to his ministry's official website.

Not only did Brende refrain from talking about human rights and democratic principles in Beijing. His boss, Prime Minister Erna Solberg, also did not touch upon these issues during her presentation about the rapprochement to the Storting, or parliament, on Dec. 19.

She underlined that it was a "major priority for my government" to normalize relations with Beijing, and now that that has been done, the government would focus on opening up "great opportunities for Norwegian industry." The prime minister vowed to "immediately resume work on a bilateral free trade agreement."

"Other countries did not speak up for Norway and finally what happened was Norway, in a way, disappointedly surrendered to the bully of China." Talking to the Nikkei Asian Review on Sunday, Lee lamented that Norway's move "is a very bad signal to other countries which uphold human rights, because whoever is speaking out for human rights will be.. punished by China."

Although this is seen as another headwind for the human rights movement in China, Frances Eve, Hong Kong-based researcher for the Network of Chinese Human Rights Defenders, said that "no one should ever apologize for honoring Liu Xiaobo's peaceful struggle for fundamental human rights in China."

She told the NAR that "on the seventh anniversary of the show trial that sent him to prison, it's important for the international community to publicly challenge China over human rights abuses." She further called on governments to stick to their claims about the principles of human rights protection, that "their silence and acquiescence to Xi Jinping's crackdown on civil society only emboldens the Chinese leadership to continue its devastating policies."