Coming to the table 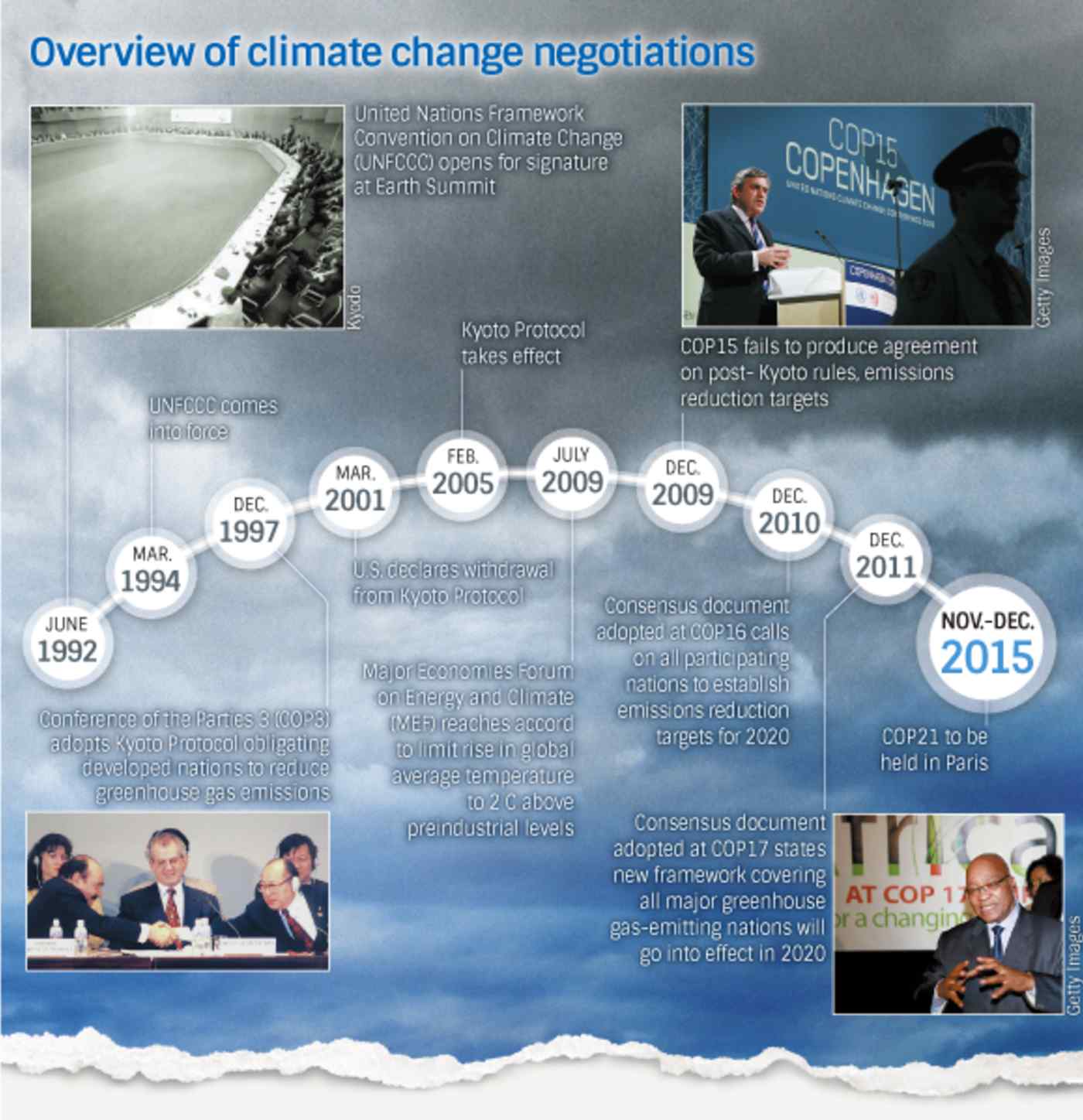 BONN, Germany/TOKYO -- On Nov. 30, representatives from more than 190 countries and regions will gather in Paris for the 21st Conference of the Parties to the United Nations Framework Convention on Climate Change. The goal over the following two weeks will be to establish a framework agreement covering actions to be taken from 2020 to combat global warming.

Climate change is a global threat, but will the participants at COP21 be able to set aside their own national interests and differences with one another to tackle it?

The upcoming United Nations climate change conference in Paris aims to work out a framework agreement that all countries, rich and poor alike, can sign onto.

Crafting such an agreement, however, is shaping up to be a fraught process.

The last working-level meeting ahead of the 21st Conference of the Parties opened in Bonn, Germany, on Oct. 19. The purpose of the five-day meeting was to finalize the draft agreement for the Paris conference, which kicks off on Nov. 30. As country after country submitted their demands, the document expanded from its original 20 pages to more than 50.

Speaking at a press conference after the meeting ended on Oct. 23, Christiana Figueres, executive secretary of the United Nations Framework Convention on Climate Change, described the draft as comprehensive and well-structured.

Laurence Tubiana, France's special representative for the Paris conference, noted that a comparable document drafted prior to the COP15 meeting in Copenhagen ran 300 pages. But both she and Figueres agree there is still much to be done in the remaining time before COP21.

Participants at COP21 will attempt to set viable targets for reducing greenhouse gas emissions, as well as figure out ways to alleviate the effects of global warming and recover from the damage caused by climate change. Financial and technological assistance for developing nations already struggling with the impacts of climate change will also be on the agenda.

Underlying the envisioned framework agreement is the notion of "common but differentiated responsibilities," a basic concept incorporated into the United Nations Framework Convention on Climate Change, which was adopted in 1992.

The Kyoto Protocol, adopted at COP3 in 1997, was the first international treaty that imposed legally binding emissions reduction targets on developed countries, including Japan, the U.S. and European nations.

The treaty sought to reduce average emissions by those countries by 5% in 2008-2012 compared with 1990 levels. The U.S., however, did not ratify it, on the grounds that China, as a developing nation, was not required to reduce emissions.

By exempting developing countries from emission-cutting requirements, the treaty wound up having only a limited impact. The economies of China and India grew rapidly, with the result that emissions by countries bound by the Kyoto Protocol amounted to just a quarter of the world's total emissions.

The Kyoto Protocol was dealt a further blow when countries such as Japan and Russia refused to sign onto the second commitment period of the treaty, which runs from 2013 through 2020.

While the United Nations began talks on a new regime to succeed the Kyoto Protocol, the interests of rich and poor countries continued to diverge. Things came to a head at COP15 in 2009, when talks nearly collapsed. Efforts since the COP16 conference, held in Cancun, Mexico, the following year, attempted to bridge the divide.

Participants at the upcoming conference will try to lay the ghost of the COP15 fiasco to rest once and for all by putting together a viable international framework that sees all countries -- including China and the U.S., the world's two biggest polluters -- shoulder their fair share of responsibility. The focal point of COP21 will be how countries strike a balance between the "all-inclusive" and "differentiated" aspects of the framework.

One reason for optimism is the fact that since their talk in November last year, U.S. President Barack Obama and Chinese President Xi Jinping have made specific promises on how their countries will deal with climate change.

At COP20, held in Lima, Peru, last year, the U.N. called on member nations to submit their draft targets for emission cuts for years from 2020. As of Oct. 1 this year, some 150 countries and regions had obliged, coming up with targets for years through around 2030. Unlike the Kyoto Protocol, the new framework will not impose emissions reduction targets on countries. The idea is that if targets are set voluntarily, nations will be more willing to commit to some kind of reduction. The prospects for the outcome of COP21 seem promising: The countries that have set reduction targets collectively account for some 80% of the world's total emissions. But even taken together, it is unlikely that these targets will be enough to bring emissions down to a desirable level.

The U.N. maintains that rises in long-term average global temperatures should be held to less than 2 C above preindustrial levels to prevent irreversible and catastrophic events, such as the melting of the Antarctic ice sheet.

According to the Intergovernmental Panel on Climate Change, a U.N. scientific body, global temperatures have already risen 0.85 C since the Industrial Revolution, so there is little room for further increases in emissions. 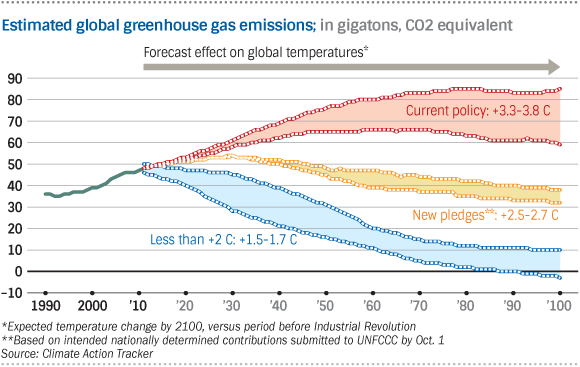 Climate Action Tracker, an international nongovernmental organization, estimates that even if all the countries that submitted emissions reduction pledges by Oct. 1 go through with them, average temperatures will still exceed the 2 C threshold by the end of the 21st century.

Based on a similar analysis, the Organization for Economic Cooperation and Development said in October that it is necessary to find a way to meet zero-emissions targets within this century.

The rub is this: Stringent requirements for emissions cuts are clearly needed, but negotiators at COP21 may find it impossible to reach an agreement if countries are told they must go beyond the targets laid out in their draft commitments. To solve this knot, negotiations are underway to craft the framework agreement first and insert a clause that will make it possible for signatories to set higher goals later. One idea is to have participating countries review and, if practical, raise their goals once every five years.

Sir Mark Walport, the British government's chief scientific adviser, told The Nikkei in October that it is imperative to avoid another climate conference in which countries put forward unachievable goals.

The price of inaction

"Loss and damage" associated with climate change will also be an important issue at the Paris conference.

The world is already witnessing extreme weather events, glacial melt and rising sea levels, all of which are thought to be linked to global warming. In recent years, developing countries have grown increasingly vocal in their calls for help dealing with climate-related damage. This, in turn, has raised concerns among developed countries -- which are largely responsible for global warming -- that they will be expected to provide compensation.

Money has been a highly contentious issue at past conferences. Developed countries pledged at COP15 to offer $100 billion a year by 2020 to help developing nations cope with global warming, but they have yet to live up to their promise. Countries affected by climate change are asking for larger sums of assistance from 2020 onward, but developed countries will likely find it difficult to meet these requests given their own economic woes.

These and other factors could hamper efforts to reach an agreement at the upcoming meeting in Paris. There are also new realities to take into account.

Mexico, for example, has promised to contribute to the Green Climate Fund, which is designed to help developing countries reduce their greenhouse gas emissions. This move indicates that the dichotomy between rich nations that extend assistance and poor countries that receive it is not as clear-cut as it once was.

This makes it all the more important to establish a framework under which each country can contribute to the fight against global warming in ways commensurate with its responsibility and capability.