At 70, China cheers its past as world braces for its uncertain future 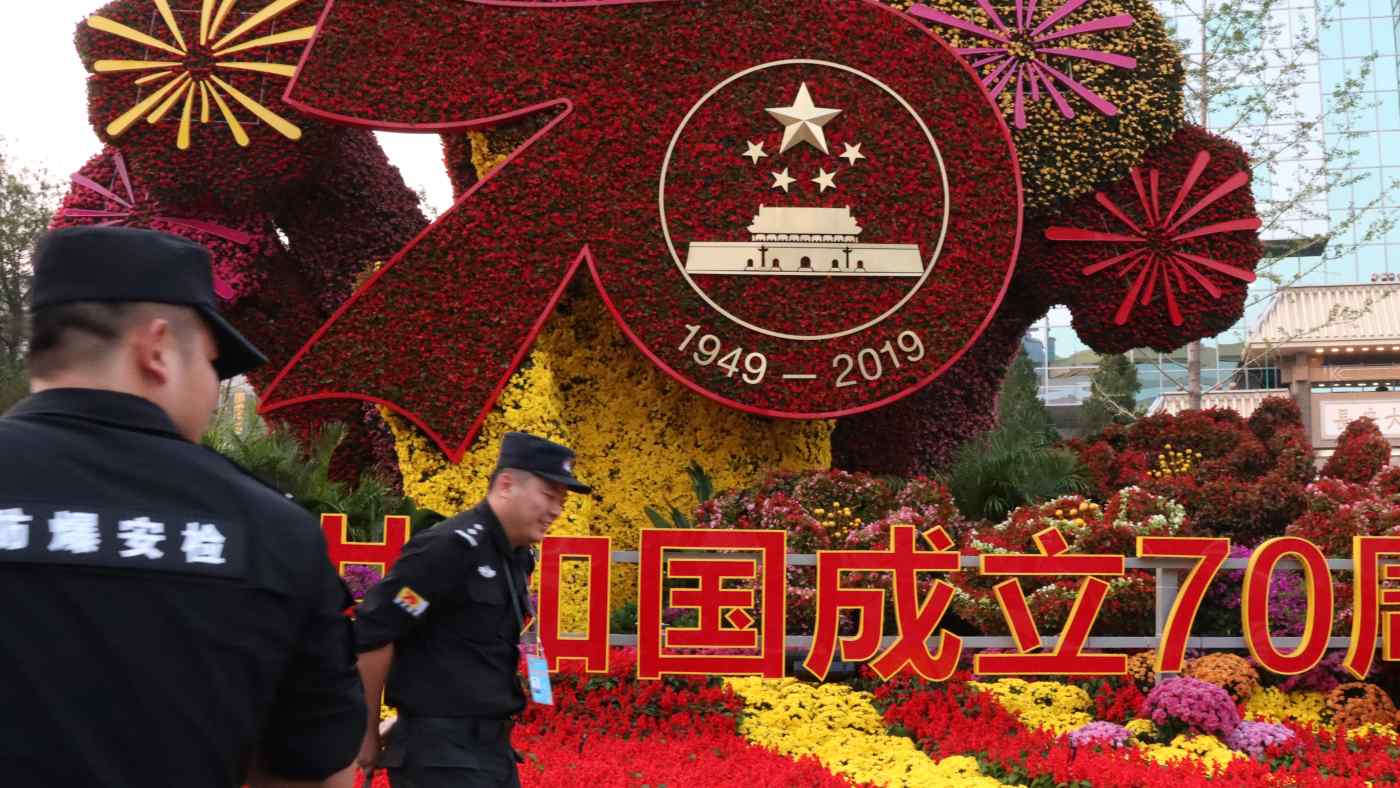 BEIJING -- China has much to celebrate as it marks the 70th anniversary of the People's Republic this week.

Over 850 million people have escaped poverty since the government adopted a market-oriented economy in 1979, a feat the World Bank called "remarkable."

This stunning rise, however, has come with a military buildup that has put the U.S. on alert and made smaller neighbors nervous. That unease will not be assuaged by what is shaping up to be China's largest military parade on Tuesday.

And while the Communist Party is taking this opportunity to bask in its success, analysts warn that the leadership faces a difficult economic battle, and that an excessively heavy-handed approach could backfire.

In recent weeks, state news organizations have played up the party's role in making China a major world power. "The country's success in the past 70 years has fully proved that only the CPC can lead China," China Daily wrote on Sept. 24, quoting President Xi Jinping. "Only socialism can save China, only reform and opening-up can promote China's development and only socialism with Chinese characteristics can lead to China's prosperity."

But China's economy is losing momentum, aggravated by the trade war with the U.S. and the ongoing protests in Hong Kong. Gross domestic product growth has been under pressure since 2010, threatening the official target of average expansion of 6.5% for the five years through 2020. Premier Li Keqiang conceded in mid-September that it will be "very difficult" for China's economy to expand at a rate of 6% or more, in light of external uncertainties. The government, mindful of debt, has maintained a preference for structural reforms to boost productivity over large-scale fiscal stimulus.

Natixis Asia Research in a report last Thursday wrote that the Chinese economy is in a "worse situation" compared with four years back, due to deleveraging and the trade tensions that flared up a year ago. The U.S. investment bank lowered its projections for China's GDP growth to 6.1% for 2019, from 6.3%, and to 5.7% for 2020, from 6.2%.

The World Bank warned recently in its "Innovative China" report that by the 2030s, the growth rate could sink to just 1.7% without a significant reallocation of resources. So while the 70th anniversary is a chance for the party to trumpet its accomplishments and burnish its image, the benefits could be short-lived, according to Andrew Kennedy, an expert on Chinese politics at Australian National University. "Unless there is a clear commitment to revive reform, the party is unlikely to secure any lasting gains in its legitimacy."

The slowdown in growth does not appear to be loosening the party's grip on power. On the contrary, Xi's position at home has become even stronger thanks to the tough U.S. stance in trade talks, said Diana Choyleva, chief economist at research firm Enodo Economics.

Painting the U.S. as an untrustworthy opponent that constantly changes the terms of trade, Chinese state media has rallied the people behind the CPC leadership, which has what is considered an unwritten social contract with the public: continued market reforms in exchange for top-down rule.

"For Xi, keeping his part of the social contract with China's people means making sure the fruits of China's economic ascent are shared more equally, corruption in the party is rooted out and pollution is reduced," Choyleva said.

But if China fails to arrest its declining growth, Xi risks upsetting the elites -- top officials and corporate leaders -- who have benefited most from the market reforms. "It's the rich elites that will be the least happy and he has to watch out for," Choyleva explained.

At the same time, the party's increasingly overbearing presence in the economy and society is causing other concerns. Earlier this month, the Hangzhou city government said party cadres will be dispatched to 100 companies in the city, including e-retailing giant Alibaba Group Holding and automaker Zhejiang Geely Holding Group.

New York-listed Alibaba quickly downplayed the move. "The government representative will function as a bridge to the private sector and will not interfere with the company's operation," the company stressed in a statement.

Foreign businesses are subject to similar monitoring. Last month, the European Union Chamber of Commerce in China raised alarm over the corporate social credit system, which rates companies based on their compliance with regulations. "If businesses fail to clearly grasp all aspects of the system and what they need to do to comply," the chamber said, "they risk serious repercussions like sanctions or even blacklisting."

Such pressures, coupled with rising production costs and the impact of the trade war, have pushed companies to consider packing up and moving elsewhere.

China's regional neighbors, too, are uncomfortable with the ever-longer arm of Beijing.

In a message ostensibly aimed at China, Vietnam's foreign minister brought up the disputed South China Sea at the United Nations General Assembly on Friday. "Relevant states should exercise restraint and refrain from conducting unilateral acts, which might complicate or escalate tensions at sea, and settle disputes by peaceful means."

There has been a marked but underreported increase in incidents related to China's presence in waters claimed by Malaysia, said Thomas Daniel, an analyst at Kuala Lumpur think tank ISIS. "In some cases, the behavior of some Chinese vessels, especially their maritime militia, are increasingly aggressive," he said in an interview.

Countries with territorial interests in the sea have turned to the Association of Southeast Asian Nations, hoping to present a united front. But ASEAN, which operates under a principle of consensus, has yet to respond cohesively, said a diplomat from the bloc who attended its foreign ministers meeting in Bangkok in July. China also attended that meeting. The diplomat, who did not want to be identified, said government officials in Southeast Asia are wary of China even as they welcome Chinese investments.

"We are not really strong enough to tell the Chinese, 'No, you should not do this kind of thing, it is the international law,' or whatever," Malaysian Prime Minister Mahathir Mohamad told reporters on Thursday when asked about the disputes in New York.

Be it Chinese citizens, Asian governments or observers around the world, many will be watching for the same thing as they follow China's celebrations on Tuesday: clues on how Beijing will behave as a global powerhouse, albeit one with some economic obstacles.

For Li Wei, an economics professor who witnessed the chaos and poverty during the Cultural Revolution, China's last four decades of market-driven growth have been a "defining" moment. "The question to us is where will China go from here," said Li, who teaches at Cheung Kong Graduate School of Business in Beijing.

"We are very much looking forward to more reforms."