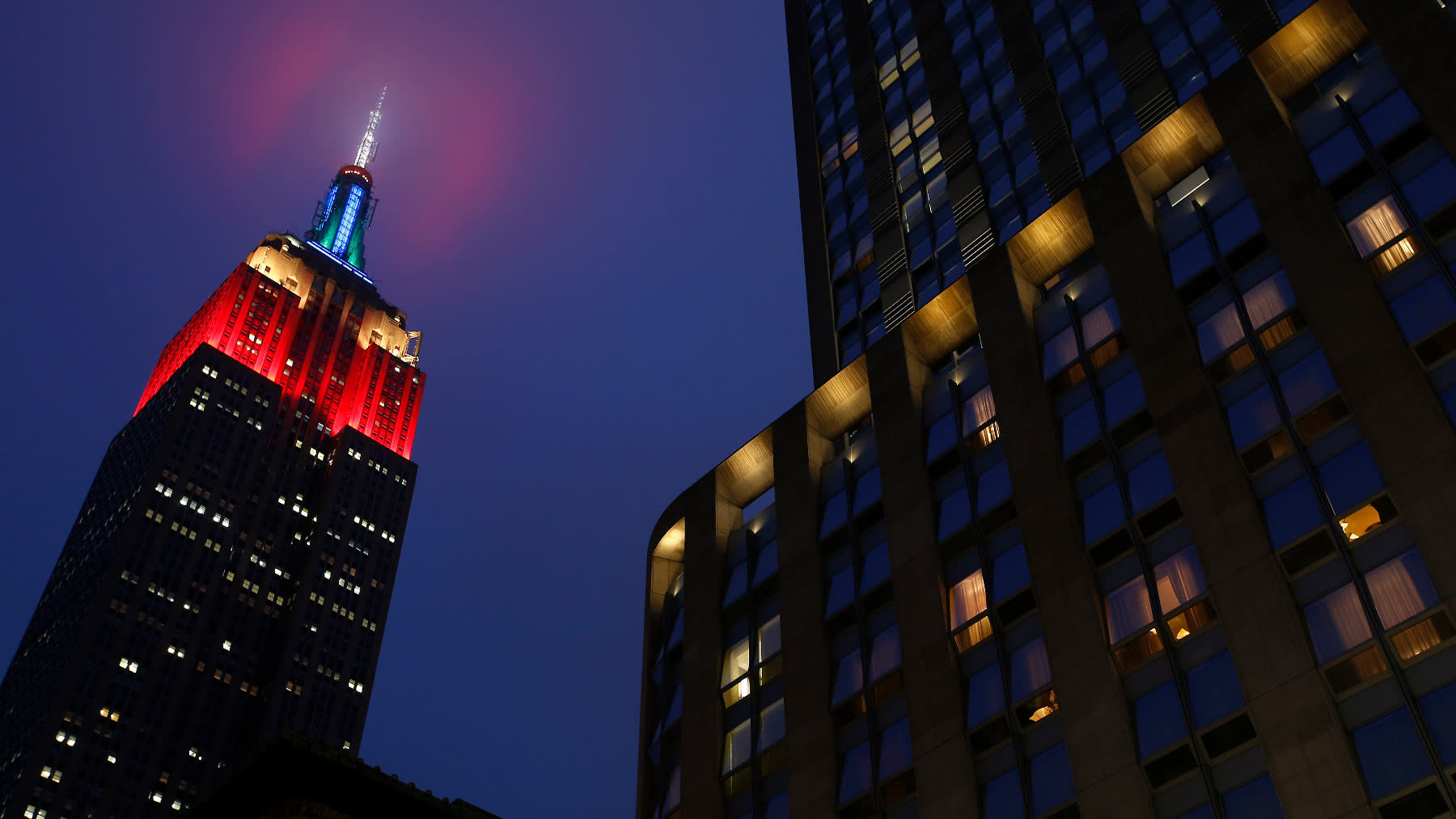 The Empire State Building, all dressed up to mark the 40th anniversary of the Rubik's Cube in 2014.   © Reuters
MARRIAN ZHOU, Nikkei staff writerOctober 1, 2019 08:03 JST | China
CopyCopied

NEW YORK -- The storied Empire State Building will put on a special light show Monday night local time to celebrate the 70th anniversary of the People's Republic of China.

"The Empire State Building welcomes every Chinese visitor to enjoy the building, especially on this special anniversary," Malkin said in a news release.

The promised "dynamic light show" will brighten the night sky in the Chinese flag's red and yellow to celebrate not only the birthday, but also 40 years of diplomatic relations with the U.S.

The building takes requests from around the world for commemorative lighting, including for Batman's 80th anniversary on Sept. 21 and Brazil's Independence Day on Sept. 7 this year. It does not receive payment. Recent years have seen the Empire State Building light up for the Chinese New Year and the 2008 Summer Olympics in Beijing. It puts on shows for other countries' national days, though not often.

The building also celebrated the 60th anniversary of the People's Republic in 2009. Roughly 20 protesters gathered outside, holding signs and chanting "No to China's empire; free Tibet now," according to The Associated Press.

This time, there were no protesters as of 7 p.m. Monday.

China has struggled with the unrest in Hong Kong ahead of this year's National Day. The authorities in Hong Kong are not permitting demonstrations Tuesday as the mainland celebrates National Day, stoking fears of further clashes between police and protesters, Nikkei reported.

The 70th birthday also comes the week before cabinet-level American and Chinese officials meet in Washington to resume trade negotiations. The tariff war has dragged on with a few escalations in the past year, weighing on the global economy.

Chinese companies bought up to 600,000 tons of U.S. soybeans Monday tariff-free as a goodwill purchase, according to Reuters. U.S. President Donald Trump said last week that a trade deal could come "sooner than you think," and American farmers and corporations have pressured him to strike a bargain.

"I'm very touched" by the lighting, Huang said at Monday's event in a video posted by Sinovision. "The Empire State Building has been dedicated to the good relationship between the U.S. and China for the past 10 years."

"I talked to Mr. Malkin before I got onstage," Huang said. "He said that no matter how many problems our two countries have, they support the development of the U.S.-China relationship and will continue to work toward having this good relationship."

Trump tweeted a congratulatory message in typical taunting fashion. He quoted author Jonathan Ward as saying America is "finally responding" to Chinese ambitions to surpass it economically and militarily, adding: "We are winning, and we will win. They should not have broken the deal we had with them. Happy Birthday China!"