Company in focus: Malaysia Airlines loses another CEO as its malaise deepens

Analysts say government influence inhibits reform, but letting go is hard to do 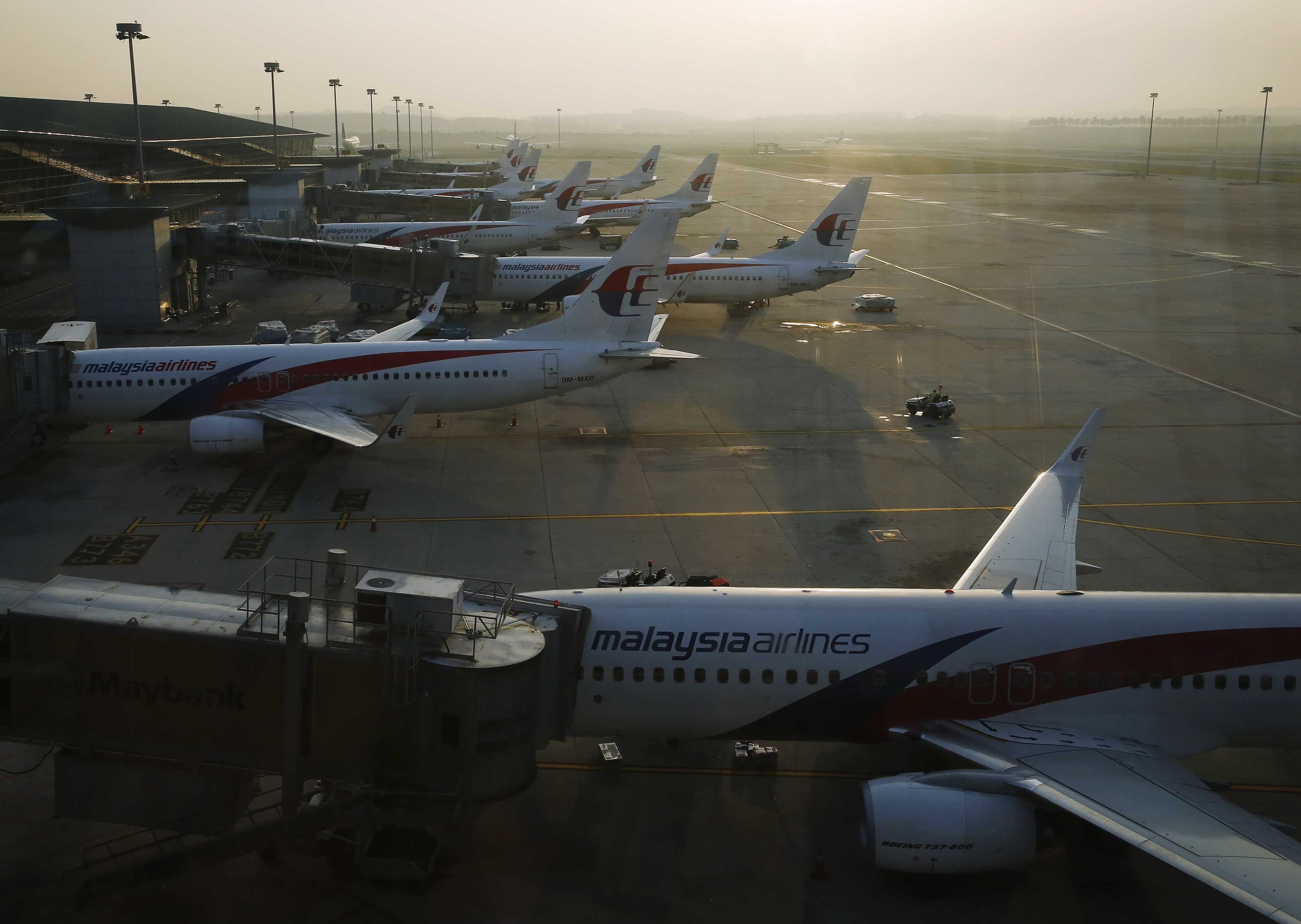 KUALA LUMPUR The shock resignation of its chief executive has thrust Malaysia Airlines back into the spotlight, its ongoing troubles highlighting the difficulty of reforming and reviving state-owned companies. With a general election looming, the question now is whether political expediency will trump business sense as sovereign fund Khazanah Nasional, the airline's owner, deals with the crisis.

Khazanah's management board is chaired by Prime Minister Najib Razak, who is himself embroiled in a scandal over the mismanagement of billions of dollars at state fund 1Malaysia Development Berhad. On Oct. 14, thousands gathered on the outskirts of Kuala Lumpur demanding action against Najib over the 1MDB affair.

Khazanah, which embarked on a five-year restructuring of Malaysia Airlines in 2014, is now scrambling to contain the latest crisis, triggered by CEO Peter Bellew's resignation. It came to light on Oct. 17 that Bellew was leaving the company to rejoin budget airline Ryanair as chief operations officer in Ireland, his home country.

Three days later, the fund approved his replacement, choosing Izham Ismail, the carrier's chief operating officer and a former pilot, "in line with [a] succession plan" outlined under the airline's turnaround plan. "I am confident Izham will resume the turnaround efforts to make Malaysia Airlines competitive, strong and profitable," Najib said in a recent Twitter post.

As COO, Izham was responsible for flight and airport operations as well as engineering.

UNEXPECTED EXIT Bellew came on as CEO after predecessor Christoph Mueller also resigned abruptly in April 2016. But Bellew's departure is hitting harder. Although he tendered his resignation on Oct. 8, Malaysia Airlines only released a statement on the matter after Ryanair told the London Stock Exchange about Bellew's appointment in a filing on Oct. 17. Bellew had been on administrative leave since tendering his resignation and is due to take up his new post on Dec. 1. The same day, an article in Malaysia's state-controlled New Straits Times written by the paper's CEO Jalil Hamid alleged that Bellew, like Mueller, had disagreed with some decisions made by Khazanah over how to run the carrier. Nine out of the 16 board members at Malaysia Airlines are from Khazanah and other government agencies.

Khazanah responded with a statement later that day slamming the article as "erroneous and misleading." It denied that it was "micromanaging" the airline and said, "The restructuring of Malaysia Airlines follows a well laid-out governance and approval framework." The statement did not address Bellew's resignation directly.

Bellew, too, denied that Khazanah had interfered in his job. "People always ask me how do I cope with government interference. There has been none for me," Bellew said in an email to the Nikkei Asian Review on Oct. 18. "Although possibly I drove Khazanah mad with my constant questions and wish for consensus," he added.

The aviation expert with over two decades of experience also said he viewed the offer from Ryanair as a "form of national service," one that he felt he could not refuse. Dublin-based Ryanair, Europe's largest airline by number of passengers, has been caught up in its own set of problems after it cancelled thousands of flights scheduled for this winter due to what it said was a problem in the scheduling of its pilots. Ryanair CEO Michael O'Leary said Bellew will be responsible for improving working conditions for pilots as part of a "significant transformation."

In a statement on Oct. 22, Bellew apologized for walking away from his contract, citing family reasons as another factor in his decision.

RED-FACED For Khazanah, the departure of both Bellew and Mueller is an embarrassment, given that they were "globally sourced" to turn the carrier around. Both had signed three-year contracts to help Malaysia Airlines return to profitability by the end of 2019 and subsequently refloat its shares.

Clearly displeased by the latest move, Khazanah did not mention any of Bellew's contributions in announcing the new Malaysia Airlines CEO. In a similar announcement last year, it thanked Mueller for his "instrumental contribution" to the restructuring efforts. 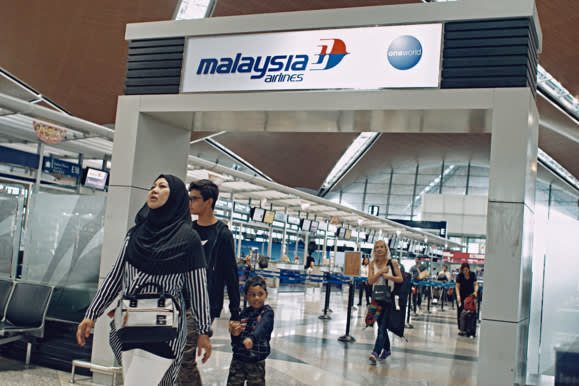 Malaysia Airlines has had three CEOs in as many years, including two from overseas.   © Getty Images

Khazanah took the carrier private at the end of 2014 in the aftermath of two disasters that hammered the airline's shares and reputation. Flight 370 disappeared en route to Beijing from Kuala Lumpur in March 2014 and is yet to be found, and Flight 17 was shot down over Ukraine in July that year.

But Malaysia Airlines was struggling with high costs and making losses even before the twin tragedies. In the 2014 recovery plan, Khazanah said the airline's operational costs were much higher than those of its peers and instructed the new management under Mueller to cut 6,000 staff from the total workforce of 20,000. Recently, Bellew said that the airline was on the brink of profitability.

A bloated workforce is one of the most difficult inefficiencies to tackle at state-controlled enterprises, which have the added social responsibility of providing jobs. Managing these companies -- whose employees tend to form the bedrock of support for the ruling government -- can be a tricky task, even for industry veterans like Mueller and Bellew, who once called it the "toughest job in aviation."

But tough is exactly what the next CEO of Malaysia Airlines must be. Aviation analysts say that in addition to expert management, the company also needs freedom from government influence. 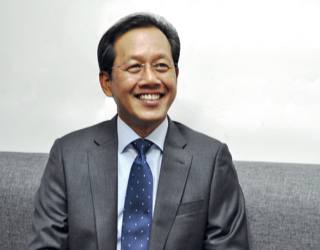 "The airline is beyond rehabilitation and saving until and unless certain hard-nosed decisions are made," said Shukor Yusof, an industry veteran who runs his own consulting company Endau Analytics. "That means the immediate removal of those who are incompetent and inept."

Malaysia Airlines is also fighting a reputation for substandard service. Its Facebook page is regularly flooded with comments complaining of poor customer service, flight cancellations and its unwieldy mobile site.

The repeated turnover at the top -- three CEOs in three years -- makes the already challenging turnaround even more difficult to achieve, said Brendan Sobie, an analyst at the Sydney-based Center for Aviation.

On the other hand, one local analyst said the carrier is showing signs of progress in its restructuring thanks to the two foreign executives doing the "dirty work" of getting rid of inefficiencies.

POLITICAL PRESSURE The government, Shukor said, is answerable to taxpayers for the "deep rut" the carrier is in despite having spent $1.42 billion to bail it out. The trouble at Malaysia Airlines stands out all the more when compared with compatriot AirAsia. The budget airline founded by entrepreneur Tony Fernandes carried 15.81 million passengers in the second quarter of this year, compared with Malaysia Airlines' 3.6 million. AirAsia's load factor, a key indicator of airline performance, stood at 88% for the quarter versus 77. 8% for its state-owned counterpart.

With the country due to go to the polls by August 2018, government interference in state companies like Malaysia Airlines is unlikely to let up. 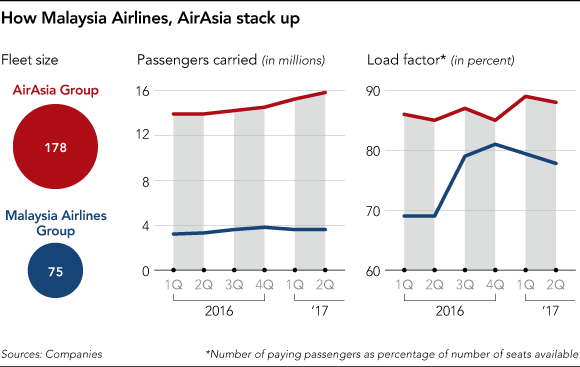 In one recent example, Najib stepped in to sort out a boardroom tussle at Felda Global Ventures, removing the chairman of the palm plantation company for alleged corruption.

FGV is controlled by the Federal Land Development Authority, which provides support for more than 100,000 farming households through handouts in the form of subsidized fertilizer and low-interest loans. This support has helped ensure the ruling party's popularity in rural constituencies.

In at least one case, however, desperation has led to a more hands-off management approach. Earlier this year, the government approved the sale of a 49.9% stake in Proton Holdings to China's Zhejiang Geely Holding Group to bail out the loss-making national carmaker. It also had no objection to the appointment of Chinese national Li Chunrong as Proton's new CEO and said the partnership with Geely was a "commercial decision" on the part of the seller, DRB-Hicom.

Khazanah owned a majority stake in Proton before divesting it in 2012 to DRB-Hicom in hopes that the local automobile conglomerate could turn it around.

Lacking economies of scale, Proton has for years suffered from the widespread perception that its vehicles are of poor quality. Sales have steadily declined, and today the company controls only around 14% of the domestic market, even though its cars are priced lower than its competitors thanks to preferential treatment.

In the case of Malaysia Airlines, the stakes are even higher. Najib promised U.S. President Donald Trump in a visit to Washington in September that Malaysia would step up investment in America. Bellew then announced during the trip that Malaysia Airlines would buy eight wide-body 787 Dreamliners made by Boeing, a U.S. company.

Former Malaysian Prime Minister Mahathir Mohamad said Bellew's departure was due to Najib instructing the company to place the aircraft order to please Trump, an allegation that Bellew said is "100% incorrect."

How Khazanah handles the awkwardness created by Bellew's sudden exit will impact not only the airline itself.

After all, as Najib said in his Twitter post, Malaysia Airlines is not just any carrier. It carries the name, image and brand of the country in the skies. "It is our pride."