Conflicts of interest abound as Trump brand pivots to Asia

Separation of politics from business easier said than done

JAKARTA/NEW YORK -- Plans for resorts and office towers bearing the brand of America's real-estate-mogul-turned-president are taking shape from the Middle East to Southeast Asia, expanding a business that he says his children will run but which raises questions about conflicts of interest.

On Jan. 19, the day before Donald Trump's inauguration as president, Indonesian media tycoon Hary Tanoesoedibjo was lunching at an upscale restaurant in New York City, some 16,000km away from his Jakarta home. He was joined by Donald Trump Jr., son of the new president.

Hary Tanoe, as he is also known, leads MNC Group, a media-centered conglomerate that includes Global Mediacom, with investments in real estate. In 2015, the group agreed with the future U.S. president on building Trump-brand resorts on Bali and in Lido, south of Jakarta. Plans call for an MNC-owned property developer to build the facilities, which are to be operated by the Trump side.

What Tanoe and Donald Trump Jr. discussed over lunch is not known, but the conversation may have turned to topics besides business. Tanoe has political ambitions of his own -- he leads a party called Perindo. After Trump's election victory last November, Tanoe told foreign media he was considering a run for Indonesia's presidency. This and other signs of rapport with Trump have fueled all sorts of speculation in the Indonesian capital.

What's in a name

Donald Trump holds executive or other posts at some 500 companies. The unlisted core of his business empire, the Trump Organization, provides only vague details of the extent of its operations. But real estate -- hotels, golf clubs, high-rises -- is clearly at the heart.

Key properties include Trump Tower, a landmark on New York City's Fifth Avenue, and Mar-a-Lago, an estate in the U.S. state of Florida that serves as the new president's "Winter White House" and recently hosted Japanese Prime Minister Shinzo Abe.

Trump claims to be worth more than $10 billion, but various U.S. media outlets put his assets in the neighborhood of $3 billion to $4 billion. The discrepancy stems from wide differences in the valuation of the Trump branding business, which licenses the name to uses as varied as apartment towers, cologne, water and steaks. According to Trump's side of the story, the value reaches upward of $3 billion. Others see it at about a tenth of that. 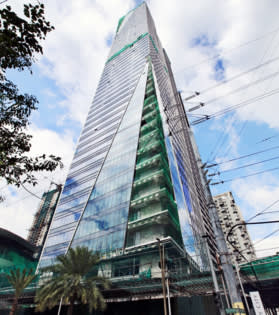 Trump Tower under construction in the capital region of the Philippines.

Regardless of the scale of his wealth, Trump's real estate business is making inroads into Asia. In Metropolitan Manila, the 57-story Trump Tower is nearing completion. Built by local developer Century Properties Group, the residential skyscraper will feature at least 250 luxury condominiums ranging in size from 60 sq. meters to 400 sq. meters.

Century Properties Chairman and CEO Jose Antonio's son got to know the president's daughter Ivanka Trump in New York. As the two families became close, a licensing deal was struck in 2012 letting the Philippine developer use the Trump brand. Demand for the new digs is high -- as of January 2015, with 27 floors built, 94% of the apartments had been sold. Deliveries are expected to begin as soon as this spring.

Elsewhere in Asia, the Trump brand has been licensed to six luxury condominium developments in South Korea, in such cities as Seoul and Busan.

Trump has said that as president, he will step back from day-to-day management of his business empire, letting his children take over for him. But his family's dealings in Asia, home to many business tycoons with powerful political connections, add to the ambiguity around the separation between commercial empire and state.

Philippine President Rodrigo Duterte last October named Century Properties' Antonio as a special envoy for strengthening economic ties with the U.S. This suggests the Duterte administration makes much of Antonio's personal connection with the Trump family.

Suspicions of conflict of interest will invariably dog Trump ventures in Asia. Starting in 2006, the Trump Organization sought unsuccessfully for more than a decade to register his name as a trademark in China. Its application was denied because a trademark had already been registered to a Chinese national. But last September, Chinese authorities ruled that person's trademark invalid, and in January, the Trump Organization's application was approved. Some American observers saw this as an attempt by China to influence Trump, calling this a risk for the U.S.

Trump has said that his family business will not start new overseas developments while he is in office. The Associated Press reports that talks on potential projects in several countries, including India, have been called off. But agreed-on developments are expected to move forward. Can the Trump administration deal fairly with countries where he has business interests? It is a question that still needs answering.