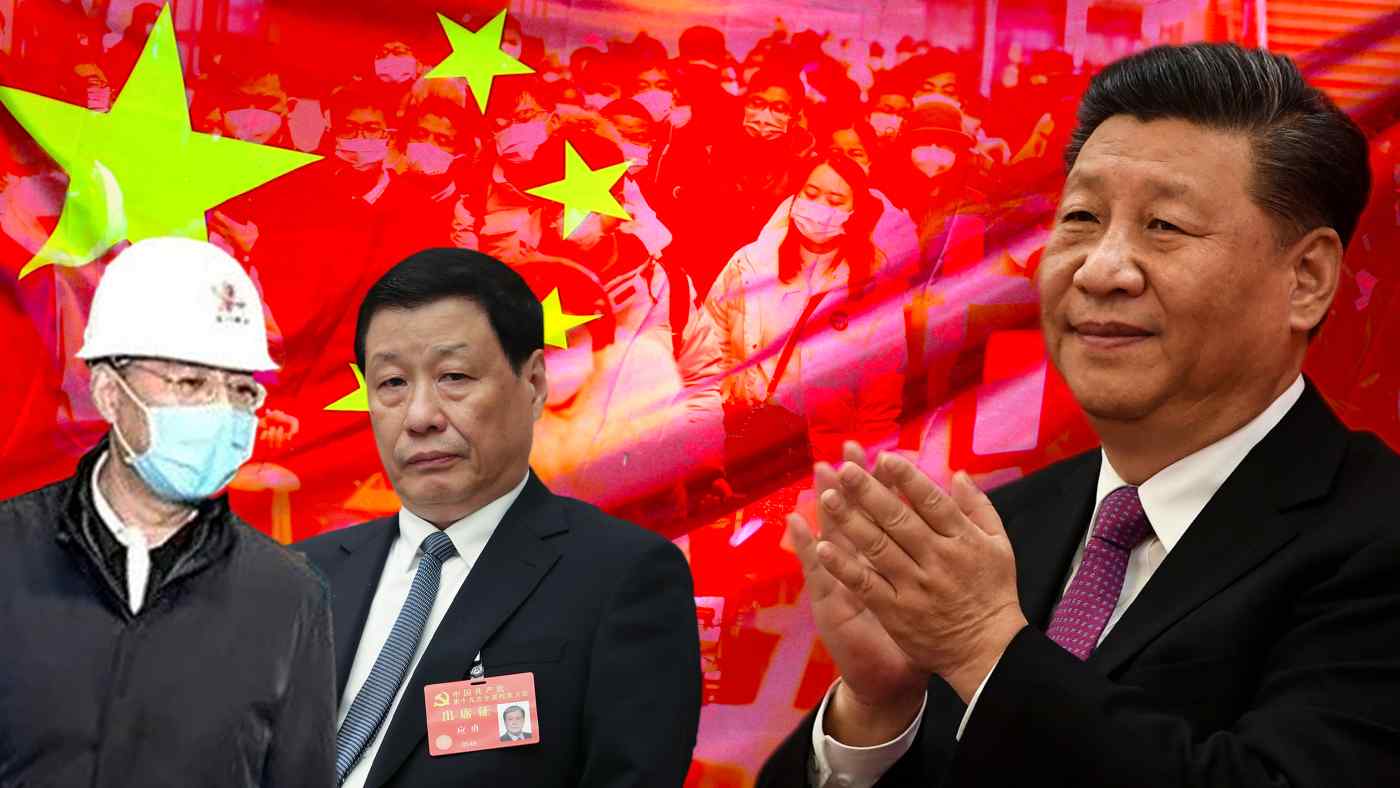 BEIJING -- For China's next-generation leaders, the coronavirus outbreak has become a trial by fire in the struggle to climb the ranks at the Communist Party's next National Congress in 2022.

While the party's core under President Xi Jinping stresses that the coronavirus outbreak is under control, local leaders are still leading the day-to-day fight against the deadly contagion.

When severe acute respiratory syndrome, or SARS, struck Beijing in 2003, longtime Xi ally Wang Qishan became acting mayor of the capital and led the containment effort. He quickly rose through the hierarchy and now serves as China's vice president.

This time, local leaders such as Yin Hong, the governor of Henan Province, have emerged as rising stars for their high-profile words and deeds in fighting the virus. Some have entered the conversation as possible contenders for national leadership.

Henan borders Hubei Province, whose capital is Wuhan, the epicenter of the pandemic. When the sprawling Foxconn plant that assembles Apple's iPhones in Zhengzhou, Henan's capital, went back online on Feb. 10, Yin was there. He inspected the production lines and cafeteria and urged workers to up the production rate.

"Let's get life and the economy back on a normal track in an orderly manner while resolutely preventing the spread of the novel coronavirus," Yin said. 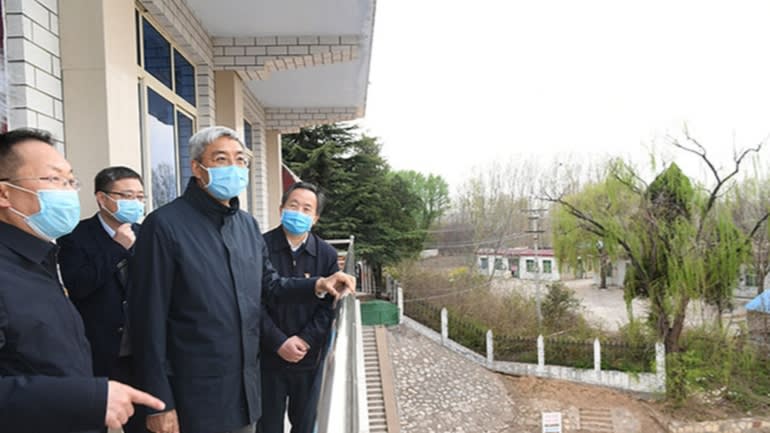 The plant has about 150,000 employees and supports not only Henan but, arguably, the entire Chinese economy. With his visit, Yin made it clear that the Henan government was fully behind the restart.

"Yin is extremely well-regarded" for his quick response to the coronavirus outbreak, said a senior local government official.

When China officially confirmed the outbreak at the end of last year, Yin immediately suspended regular long-haul bus services linking Henan to Hubei. In January, he presided over rapid openings of specialized hospitals and clinics.

Henan also set up a channel to send information on preventing infection directly to the smartphones of most residents. This was credited with helping to contain the outbreak in the province, and was held up as an example for the rest of the country to follow.

Yin and Ying Yong, a member of the Xi faction and former Shanghai mayor, both served as members of Shanghai's party standing committee. The latter moved from Shanghai to Hubei as the province's new top official to cope with the coronavirus outbreak. 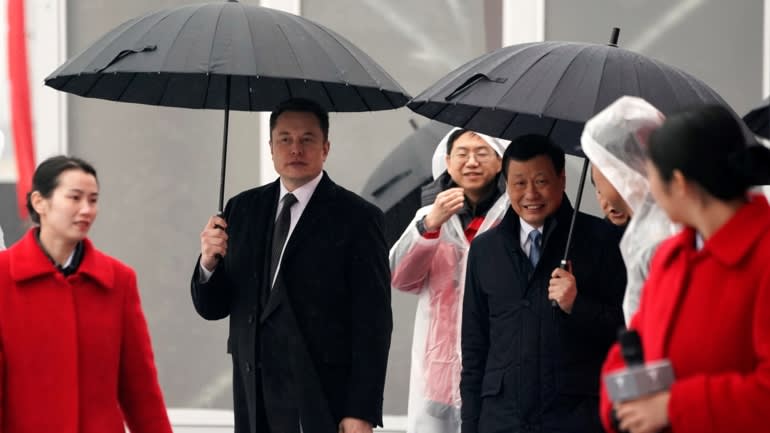 When Wang became Beijing's acting mayor, he was 54 -- close to Yin's current age. Wang was praised as "chief of the fire brigade" for bringing the SARS epidemic under control.

After paving the way for the successful 2008 Summer Olympics in Beijing, Wang was promoted to the Politburo at the Communist Party's National Congress in 2007. The Politburo comprises the party's top 25 leaders.

Yin is still only an alternate member of the Central Committee, which has a membership of roughly 200. But there is speculation in party circles that he will enjoy a big promotion at the party's congress in 2022.

Another rising star is Chen Yixin, who serves as the deputy head of a "central guidance group" dispatched to Wuhan by Xi. Chen is also secretary-general of the party's Central Political and Legal Affairs Commission.

Chen, 60, advanced his career in Zhejiang Province. When Xi held sway in Zhejiang from 2002 to 2007, including as the province's party secretary, Chen served as deputy secretary-general of the local party committee.

Chen has Xi's deep trust and a network of personal connections in Wuhan, built up during his time as the city's party secretary from 2016 to 2018. That is why he was appointed deputy head of the central guidance group to act as a go-between for Beijing with local officials.

Immediately after arriving in Wuhan on Feb. 8, Chen started to hold top-level problem-solving meetings for one hour every morning. He declared "an all-out assault" on Feb. 12 to win in the battle against the coronavirus in Wuhan.

A drive to secure hospital beds and improve treatment helped reduce the number of new cases in the city to several hundred by Feb. 19, from previous levels of more than 1,000. This paved the way for Xi to highlight the achievements made in Wuhan during his March 10 visit there -- his first since the outbreak began.

Sun Chunlan, a vice premier and the only female Politburo member, has also enjoyed the spotlight as head of the central guidance group in Wuhan.

Sun's performance is reminiscent of Wu Yi, who served as vice premier during the SARS outbreak. Wu, also a woman, did double duty as health minister and worked with Wang to contain the epidemic.

Sun once served as the top official of Fujian Province, one of Xi's strongholds. Though she is 69 years old, some are recommending her for membership on the Politburo Standing Committee -- China's top decision-making body -- if the unofficial retirement age of 68 is scrapped at the next congress.

For some party cadres, however, the coronavirus crisis has brought political setbacks.

Ma Guoqiang and Jiang Chaoliang -- the top officials of Wuhan and Hubei, respectively -- were replaced for their failure to stem the initial spread of the outbreak.

Ma, 56, and Jiang, 62, are both competent technocrats and had been seen as having promising futures. Jiang has experience in leading a state-owned bank and is said to be close to Wang, the vice president. But both Jiang's and Ma's political careers are now believed to be all but over.

Wang Zhonglin, 57, took over from Ma as Wuhan's top official and gained an opportunity to demonstrate his abilities. But he drew a backlash from Wuhan citizens for his call for "gratitude education," to teach them how to thank Xi and the party.

Meanwhile, Ying, the former Shanghai mayor and current top Hubei official, has developed a reputation for playing it safe, according to Hong Kong media.

Local leaders play a crucial role in containing the outbreak because they grasp the reality on the ground and can decide what measures are necessary.

"A person's ability is tested during a time of crisis more than ever," a senior local government official said.

"Many personnel appoints involving senior officials have started ahead of a party leadership shakeup scheduled for 2022," the official said. "How they have responded to the new coronavirus will be put to the test."