KARACHI -- In the midst of the coronavirus pandemic, Pakistan has had to suspend immunization for another dangerous contagion -- poliovirus -- for 40 million children under the age of five, sparking fears that the disease could spread across the country and other countries declared polio-free.

Pakistan halted mass immunization on Mar. 26 under the directives of the Global Polio Eradication Initiative -- a public-private partnership of national governments and international public health organizations. The need for social distancing, vaccine supply disruption due to closed borders and increased freight costs, and the redeployment of polio surveillance teams to COVID-19 duties led to the suspension of some polio campaigns.

While most countries have eradicated all three types of polioviruses, Pakistan and Afghanistan remain at risk for type-1 wild polio. In recent years, cases of type-2 circulating vaccine-derived poliovirus, or cVDPV, have also been reported in Asia and sub-Saharan Africa, as well as Yemen, Somalia and other Middle Eastern countries.

The Pakistani government had stepped up efforts against the virus following an alarming rise in wild poliovirus cases -- from 12 in 2018 to 147 in 2019 -- and the emergence of 22 cases of cVDPV last year. The situation reflects a massive failure on the part of authorities.

The former campaign included comprehensive door-to-door vaccinations and close surveillance of children under the age of five almost every month. Also, for the first time, polio teams had begun reaching out to schools, where children could easily be immunized en masse. Vaccination booths were even set up at transit points deemed polio hot spots, particularly along the border with Afghanistan. 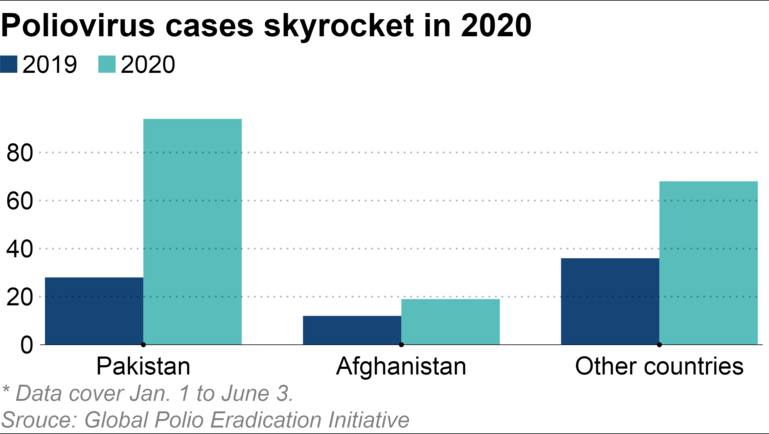 "2020 had been tagged as the year for transformation in the polio program to stop transmission in 2021," stated an internal document of the National Emergency Operations Centre for Polio Eradication -- the body now overseeing COVID-19 operations -- seen by the Nikkei Asian Review. "Hence any disruptions in the program plans would have a massive effect on this objective."

The document further noted that cVDPV was likely to spread from the border regions with Afghanistan to the rest of the country.

In the past, national emergencies such as disease outbreaks and political transitions have adversely affected poliovirus campaigns.

During the 2014 Ebola outbreak in Africa, scientists isolated 13 cases of cVDPV from polio patients and their healthy contacts. It was an alarming discovery, given that the wild form of the virus was thought to have been eradicated globally in 1999 after an aggressive immunization campaign. It was also found that diverting public health funds in the fight against Ebola disrupted polio eradication efforts, which led to the spread of the virus in areas of low vaccination coverage and immunity. 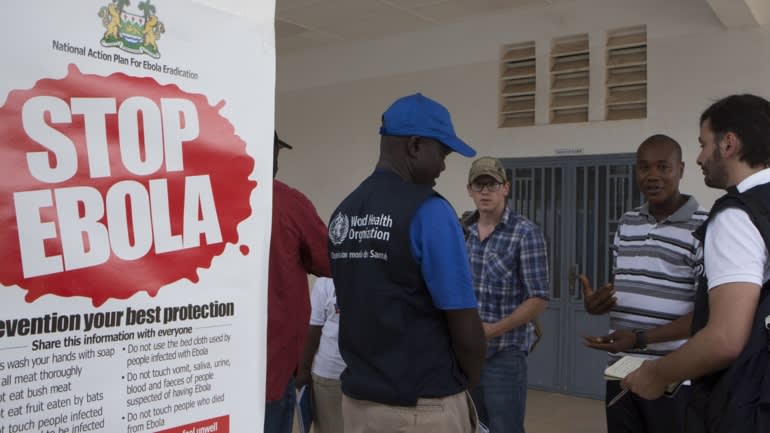 Redirecting funds earmarked for polio to the fight against Ebola in 2014 are said to have disrupted polio eradication efforts.   © Reuters

Now with the polio immunization campaign suspended due to COVID-19, Pakistan may face a similar setback. The spike in polio cases this year indicates as much: As of June 3, there have been 94 cases compared with 28 over the same period last year.

"You have children who were born since the campaign was delayed, who will not have received polio vaccination," Oliver Rosenbauer, the World Health Organization's spokesperson for the Global Polio Eradication Initiative, told Nikkei. "Then, some children who have not yet received the sufficient amount of polio vaccinations are also at risk."

The problem, however, is global in scale. According to the WHO, there are 39 countries where polio campaigns have been halted, leading to fears that the virus may spread worldwide, as there are still pockets in populations worldwide that are underserved.

Past polio cases surfacing in different parts of the world have been traced to Pakistan. In 2007, a university student returning to Australia from Pakistan was found to be infected. In 2013, poliovirus was found in sewage samples in Israel, again having the same genetic makeup as viruses in Pakistan. In 2019, poliovirus traced back to the country was also found in sewage samples from Iran's Baluchistan-Sistan Province. 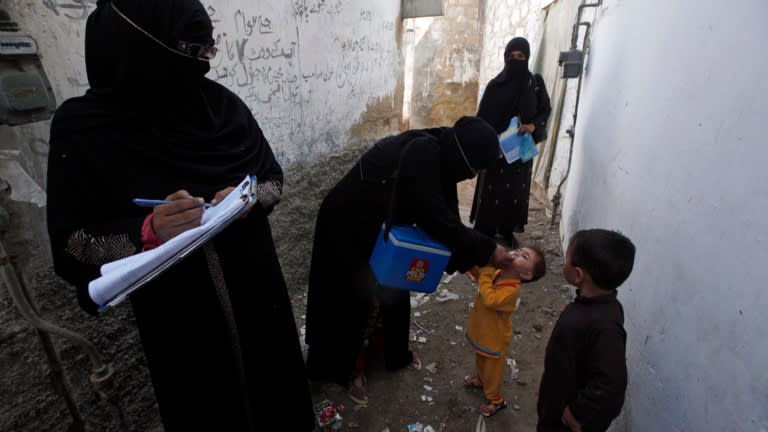 A polio vaccinator gives drops to a boy while a colleague takes notes nearby, along a street in a Karachi slum October 2014. Pakistan halted immunization on March 26 due to the coronavirus outbreak.   © Reuters

"We have just learned in coronavirus that you can't control infectious diseases as they don't respect borders," said Rana Jawad Asghar, chief executive officer of Global Health Strategists and Implementers, an Islamabad-based public health consultancy company. "[The only way] to win that war is to contain them locally."

Developed countries are equally at risk. "It's true that countries like the U.S. or the U.K. tend to have better vaccination coverage rates than, for example, Somalia and Yemen," said Rosenbauer. But he cited an example from 2005 when poliovirus was found in the sewage system of Geneva that was linked to an outbreak in Chad at the time.

"In Geneva, we have closed sewage systems and 98% vaccination coverage, so there were no children paralyzed. But Geneva was infected and this shows how easily viruses can spread." Experts agree that the sooner the campaigns start the better. "It's not a question of can we. We should be [starting campaigns]," remarked Asghar. "We have to make sure that COVID-19 does not destroy the progress of the last thirty years."

Rosenbauer claims that the WHO is operation-ready to resume immunization campaigns as early as this month. Yet, with Pakistan witnessing a rapid increase in the number of COVID-19 cases, with the next two weeks crucial, the resumption of polio campaigns may have to wait some more.

Meanwhile, if the polio outbreak spirals out of hand, it would put pressure on already stretched health care systems worldwide. At worst, it could even lead to the next global health emergency.