BANGKOK -- Thailand's election law governing its lower house of parliament is set to take effect on Tuesday, paving the way for a long-awaited election to be held, likely next February.

In what is expected to be a heated campaign, much attention will focus on the extent of power the military will hold following the vote.

As the countdown starts, the focus now is on what Prime Minister Prayuth Chan-ocha's plans are regarding his own position and that of other parties.

Since the military ousted former Prime Minister Yingluck Shinawatra in 2014, the junta government has delayed an election several times, holding back the return of democracy.

In September, King Vajiralongkorn Bodindradebayavarangkun endorsed the last two bills that were required for a general election to take place, with the law coming into effect 90 days later, on Dec. 11. Once that law takes effect, the junta government must hold an election within 150 days.

The junta and the Election Commission met with Thai political parties on Friday to discuss the election. At the meeting, the junta presented a road map to the proposed poll day on Feb. 24.

According to the plan, the junta will lift a ban on political activities this month. The ban was loosened in September, with some activities, such as recruiting new members and selecting new leaders, allowed. But political campaigns and gatherings of more than five people are still prohibited. Thailand's Prime Minister Prayuth Chan-ocha walks next to his cardboard cutout during preparations for national Children's Day at the Government House in Bangkok on Jan. 12.    © Reuters

The junta will cease submitting any new laws on Dec. 28, effectively becoming a caretaker government. The royal decree to hold an election will be granted on Jan. 2. Two days after the decree, the Election Commission will officially announce the date of the election.

Thailand is to chair the 2019 Association of Southeast Asian Nations summits, the first of which is scheduled for June. There is an unwritten rule among ASEAN nations that the chair nation should not hold a general election while it holds that position.

If the poll is to be held on Feb. 24 as proposed, the Election Commission will then have until April 25 to come up with the official results. This will then give the winning political parties enough time to form a ruling coalition and an administration.

With the date of the vote looking increasingly clear, the focus is now shifting to Prayuth's political trajectory.

The junta leader has not yet stated whether he will pursue a political career. So far he has only signaled that he may want to remain in power after the general election. "I can say right now that I'm interested in political positions," Prayuth told reporters in September, but he has not since elaborated.

However, he has not expressed an interest in becoming a member of parliament. According to the provisional constitution, all the candidates aiming to be members of parliament must announce their political affiliation 90 days before the poll. Assuming the poll will be Feb. 24, that deadline passed on Nov. 26. 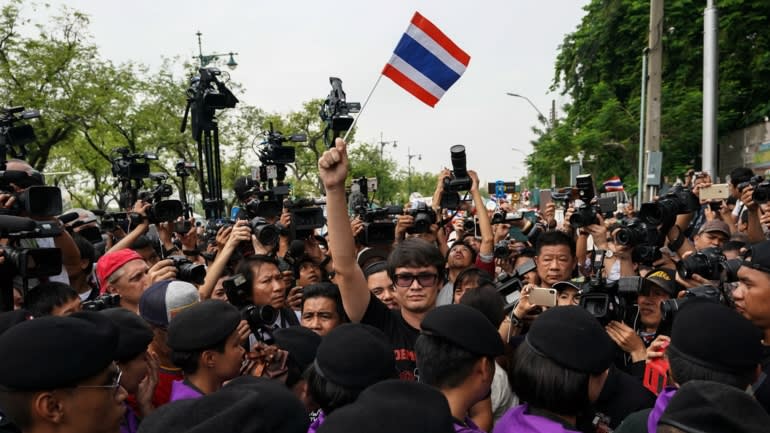 Pro-democracy activist Rome Rangsiman, center, holds up a Thailand flag in Bangkok on May 22.    © Reuters

On Dec. 1, Sontirat Sontijirawong, secretary-general of the pro-junta Palang Pracharat Party, said that Prayuth was among its top choices for premier. Parties must inform the Election Commission of their prime ministerial candidates before the Jan. 18 deadline by which the necessary papers to run for office must be filed.

The prime minister on Dec. 4 said a general election would be held before the King's coronation, instead of after the royal ceremony, as he had previously stated in June. This leaves fewer excuses for the junta to further put off returning the nation to democracy.

Despite all this, a further postponement or even cancellation of the general election cannot be ruled out. In the past, when political activities have escalated into social disorder in Thailand, military intervention has been used.