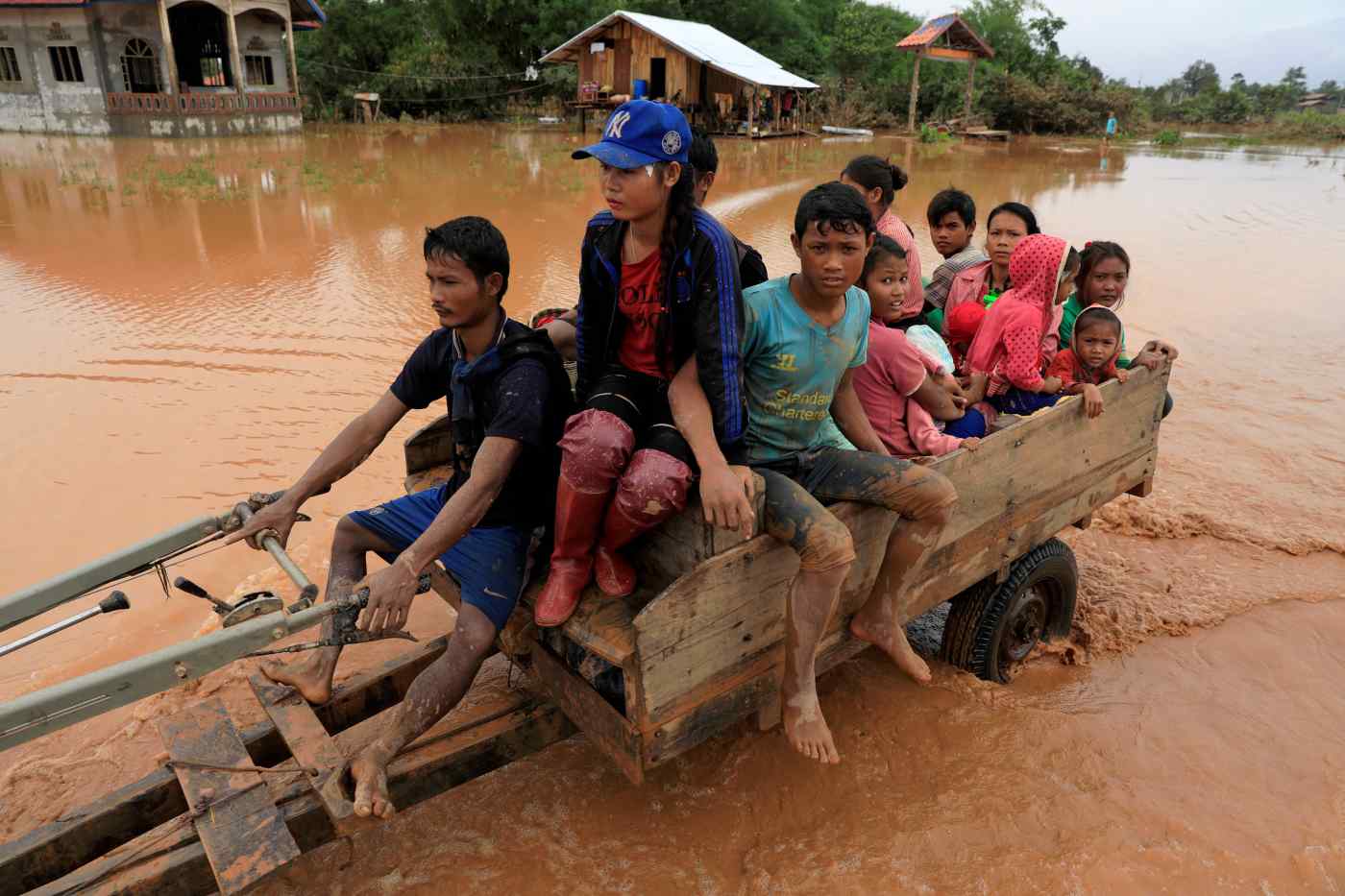 BANGKOK -- A collapsed dam in Laos is pushing the communist regime in the Southeast Asian country into unchartered territory, with leaders of the notoriously oppressive and opaque one-party state facing criticism a week after the disaster, according to seasoned observers based in the capital Vientiane.

The regime's attempts to restrict information about the landlocked country's worst water-related disaster in decades backfired, triggering a backlash among Internet-savvy Laotians. There have been fierce outbursts on social media, the only window for free expression in a country where the mainstream media are heavily censored.

Facebook users have dismissed the spin of Prime Minister Thongloun Sisoulith about the disaster's impact. The regime's initial accounts said the breaching of the dam at the Xe-Pian Xe-Namnoy hydropower project resulted in 27 deaths, but later on that number was dramatically reduced, only to be restored back to 27 deaths by the weekend. A further 131 people are estimated to be missing and 7,000 have been displaced in Attapeu, the southeastern province which bore the brunt when 5 billion cubic meters of raging waters escaped the dam.

"Oh, don't lie," wrote one Facebook user, identified as Fanta Some, echoing sentiments shared by other users who have been berating the regime for continuing to keep the public in the dark. Among other things, they have accused the authorities of fudging the death toll, with various contradictions in state media over the number of dead. Doubts have also arisen over official estimates of people unaccounted for, with one official putting it at 1,100.

Over the weekend, the regime said it would begin investigating the cause of the collapsed saddle dam at the $1 billion Xe-Pian Xe-Namnoy hydropower project, working with South Korea and Thailand. It is the country's third dam to have breached in as many years. The first, where cracks appeared two years ago, was built by a Vietnamese dam developer close to the Laos-Vietnam border.

Sources who monitor the regime say that Vice President Phankham Viphavanh has reportedly pushed the government to ramp up the rescue efforts. "He is concerned about this issue and the public reaction," one Laotian source told the Nikkei Asian Review on condition of anonymity. Phankham is seen as a rising star in the 11-member politburo, which wields the ultimate authority in Laos' communist party, and is billed to be the country's next president. The accusation of keeping the public in the dark has been heard before, in particular when the regime has commissioned previous hydropower schemes, including Xe-Pian Xe-Namnoy.

Villagers living directly in the line of potential disasters from such projects have had no access to the risk assessments. A common view shared by foreign analysts of Laos' hydropower ambitions is that local communities are potentially being "put in harm's way with no basis of assessing the risk that project developers' decisions have imposed on them."

Those who have tried to find out details of risk assessments for other dams in Laos have hit a wall. According to Shalmali Guttal, executive director of Focus on the Global South, a Bangkok-based think tank, the risk assessments for new dams should be included in their environmental and social impact assessments. However, this was never the case, she said.

Instead, it is standard practise for the bidder of a hydropower project to hide the assessments in "commercial and confidential documents" to keep them from the eyes of competing bidders, she said. "The risks are masked to make the investment worth it."

PNPC secured loans for 70% of the costs from four Thai banks: Krung Thai Bank, Bank of Ayudhya, Export-Import Bank of Thailand and Thanachart Bank. The remaining 30% came from the equity of the four stakeholders, including South Korea's SK Engineering and Construction.

Information on who underwrote the risk for the project is not publicly available.

The cross-border impact of the collapsed dam puts the Laotian regime in hot water for the first time. For years, it had dismissed concerns expressed by environmentalists about the dangers of its quest to tap its abundant rivers, build hydropower projects and become the "Battery of Southeast Asia."

By 2025, Laos is expected to have completed 50 hydropower projects, more than double the amount that are now in operation. The regime has sought to use the dam developments as a way to lift one of the region's poorest countries out of poverty. The dams have helped Laos export two-thirds of the hydropower it produces to neighboring countries such as Thailand and Vietnam, earning the Laotian state vital foreign exchange.

International Rivers, a global environmental campaign group, has warned for more than a decade about the cross-border impact of Laos' rush to build dams. Thai green groups have done likewise, even dragging the Laotians to a Thai court to stall the building of a dam that would impact Thai communities along the Mekong River, Southeast Asia's largest body of water.

That case is still pending in Thailand's Supreme Administrative Court. "The judges accepted this case and noted that [the] trans-boundary impact from dams in Laos needs to be addressed," said Pianporn Deetes, the Thailand campaign coordinator for International Rivers. "This is the first time Thai courts recognized trans-boundary impacts of dams."