MANILA -- Two prominent associates of Philippine President Rodrigo Duterte running for Senate seats in the May midterm elections are getting the Hollywood treatment, sparking complaints from critics that they are violating election rules.

Former national police Chief Ronald Dela Rosa, implementer of Duterte's drug war, had his life made into a movie in January. This weekend, Duterte's personal assistant of 20 years, Bong Go, will feature in a popular TV drama.

Go's recent appearances on the ABS-CBN television channel, including a top-rated talk show, have raised questions over whether the Philippines' largest broadcaster is trying to curry favor with Duterte. The president has previously attacked the station for its critical coverage of his administration and threatened to block the renewal of its license, which expires next year.

ABS-CBN did not respond to a request for comment.

Dela Rosa's movie was met with protests online. On Facebook, filmmaker Lore Reyes called for a boycott, while another filmmaker, Carlitos Siguion-Reyna, slammed the movie's political motive. It was screened just a few weeks ahead of official start of campaign on Feb. 12. During the campaign, documentaries or TV shows about candidates are banned.

Malou Tiquia, a political strategist and CEO of Publicus Asia, said portraying the lives of politicians in dramas could bring in advertising revenue but added, "The realpolitik here is that they need their franchise renewed."

Dela Rosa and Go are running for two of the 12 senate seats that are up for grabs in their first try for elected office.

While their ties to the popular Duterte has enhanced their name recognition, they still need to win voters over, said Tiquia, "They can win voters' trust by showing their endearing qualities. The [dramas are] a good way to demystify the candidates."

In the drama airing on Saturday, Go is portrayed as a family man and Duterte's loyal lieutenant. Dela Rosa, who in real life has overseen a violent crackdown on drugs that has seen thousands of suspects killed, is painted as a family-loving, churchgoing cop in the movie, "Bato: The General Ronald Dela Rosa Story."

Dramatic portrayals of politicians are effective, according to Tiquia. "Filipino voters are very personal. They want to see themselves in the candidates," she said.

Another Duterte ally, Sen. Cynthia Villar, who is seeking re-election, will also feature in a drama on the GMA Network on Saturday. A number of Senate incumbents have also been brought to the big and small screen. And the Philippine entertainment industry itself has produced a lot of politicians, including former President Joseph Estrada, who fought bad guys and defended the weak in his action movies.

The midterm elections are seen as referendum on Duterte's contentious policies, such as the drug war and a China-friendly foreign policy. But having more allies in the Senate could allow the president push other key parts of his agenda, such as adopting a federal system of government, a proposal that has stalled due to a lack of support in the Senate. 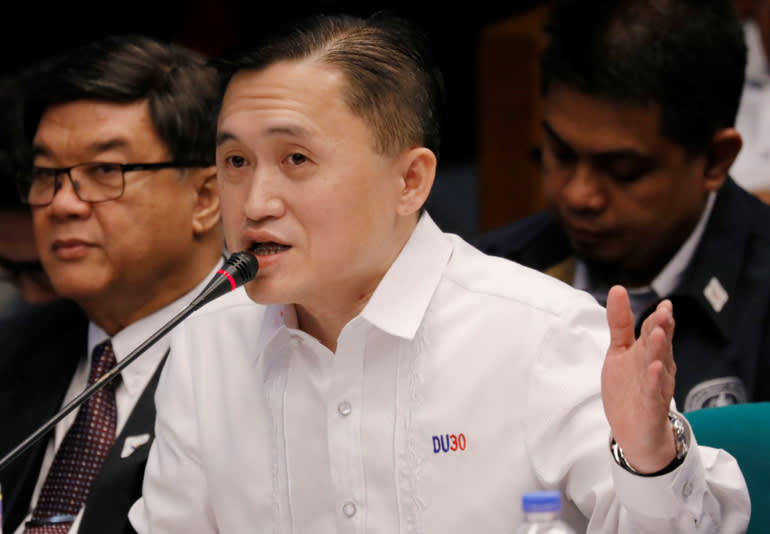 Duterte, who attended the premiere of Dela Rosa's biopic, rushed to his chief cop's defense. "People have preconceived notions about the timing of the movie [being] shown. But you know, it is a tribute to an officer and a soldier of the Republic of the Philippines," Duterte said.

Robin Padilla, who played Dela Rosa in the movie, said he was merely doing his job as an actor.

On Facebook, screenwriter Jerry Gracio weighed in, and shared his experience when he refused an offer to write about Imelda Marcos, the wife of late dictator Ferdinand Marcos. "There are core values that should not be compromised, not just as a writer or artist, but also as a person," Gracio said.

Lito Caranto, a 50-year-old fruit vendor in Manila, said he is keen to watch Go's drama.

"I only know him as the president's constant companion. But if he has an inspiring life story to share, I may vote for him," he said.