President Duterte's decision paves the way for ramping up investment on the country's second-largest island, and was welcomed by the American Chamber of Commerce of the Philippines.   © AP
CLIFF VENZON, Nikkei staff writerDecember 10, 2019 19:53 JST | Philippines
CopyCopied

MANILA -- Philippine President Rodrigo Duterte will not extend martial law on the southern island of Mindanao, which has scared off investors since being imposed in 2017.

Martial law is set to expire on Dec. 31, having been declared after Islamic State-aligned militants laid siege to the city of Marawi in May 2017. The siege lasted five months, but Duterte previously asked Congress to extend martial law due to the region's volatile security.

"[Duterte] made the decision following the assessment of his security and defense advisers of the weakening of the terrorist and extremist rebellion, a result of the capture or neutralization of their leaders, as well as the decrease in the crime index, among the factors considered," presidential spokesperson Salvador Panelo said on Tuesday. 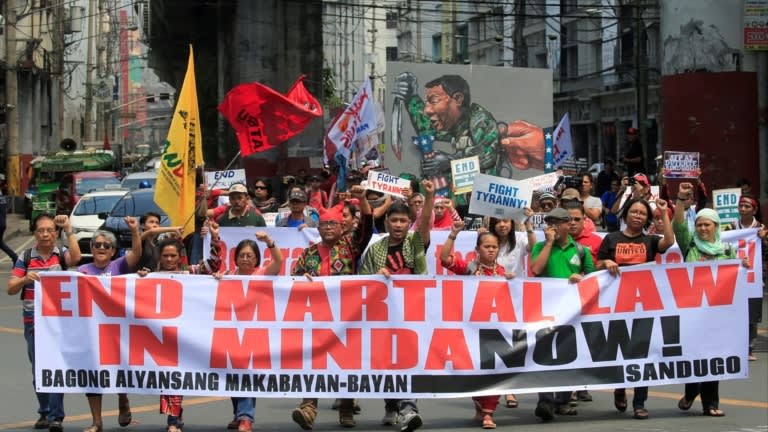 Activists display a banner and a mural of President Rodrigo Duterte denouncing the declaration of martial law in Mindanao outside the presidential palace in Manila in May 2018.   © Reuters

Duterte's move comes as foreign direct investment in the Philippines dropped 37% to $5.1 billion from January to September 2019 due to the U.S.-China trade war, the Philippine central bank reported on Tuesday.

The American Chamber of Commerce of the Philippines welcomed Duterte's decision, saying in a statement: "We encourage investors to include Mindanao and its 25 million Filipinos in their plans in 2020."

The declaration of martial law in Mindanao revived memories of martial law in the 1970s and 1980s under the Marcos dictatorship -- an era marked by widespread human rights abuses such as torture, abductions, killings and corruption.

Duterte's martial law has seen an increased military presence in the region, with government checkpoints and strict gun controls. Despite this, the island was recently rocked by a series of suicide bombings.

"The Palace is confident of the capability of our security forces in maintaining the peace and security of Mindanao without extending martial law," Panelo said. "The people of Mindanao are assured that any incipient major threat in the region would be nipped in the bud."