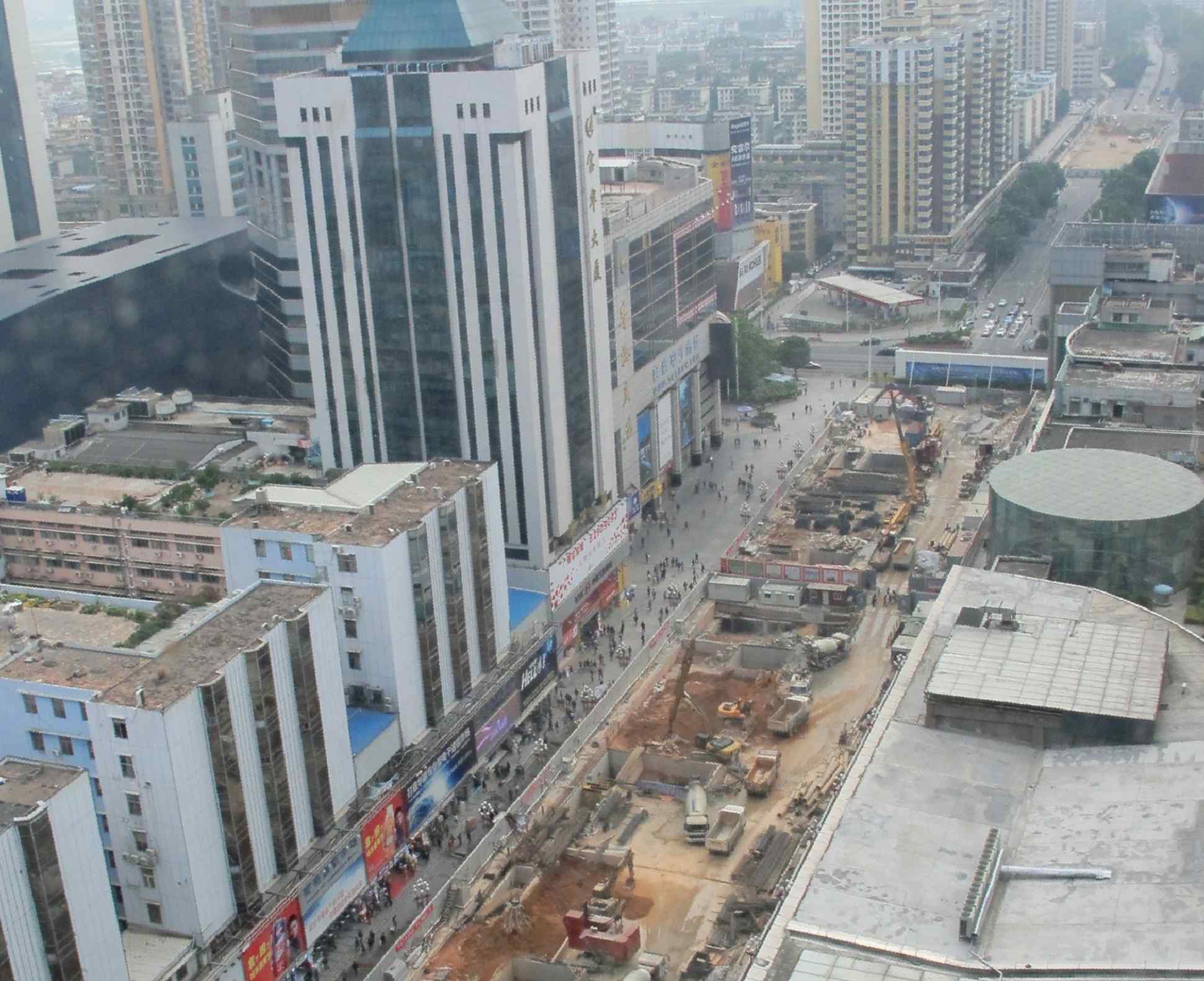 In central Shenzhen, development projects, such as the site pictured here in January 2015, hauled off surplus soil to another part of the city without attention being paid to the risk of accidents.
Politics

TOKYO -- When a massive landslide killed dozens of people in the southern Chinese city of Shenzhen, China Vanke, a major Shenzhen-based real estate developer, was facing a hostile takeover bid by Baoneng Group, a property and insurance conglomerate and Vanke's largest shareholder.

The landslide, which the Chinese government has described as a "man-made disaster," and the bitter takeover battle have a common thread: real estate development.

The harrowing disaster happened on Dec. 20 when a mountain of waste from real estate development projects collapsed onto an industrial park. The waste, mostly surplus soil from construction sites, had been piled up recklessly against a hill.

Behind the landslide was a rapidly growing real estate inventory in Shenzhen, which has seen a bevy of mammoth development projects in recent years, amid the country's economic slowdown.

The real estate industry's woes are also behind the battle over the control of Vanke, the nation's largest homebuilder. Another related factor is Chinese President Xi Jinping's relentless anti-corruption campaign.

Wang Shi, Vanke's chairman, referred to Baoneng as a "company that cannot be trusted at all" and embarked on a move to fend off the unsolicited takeover attempt by the Chinese rival, which is also headquartered in Shenzhen.

But Vanke could not count on help from China Resources, which is supervised by the State Council, because senior executives of the company have been detained in corruption inquiries.

So Vanke turned to Anbang Insurance Group, another major shareholder and emerging insurance group that created a buzz by buying the Waldorf Astoria New York, the iconic luxury hotel in Manhattan.

Vanke bet that Anbang would be a reliable white knight, but the outlook of the takeover battle remains unclear.

The main players in this fight between a dragon and a tiger have one thing in common, according to people well-informed about what is going on behind the scenes in China's rough-and-tumble business world. They are all companies linked to "second-generation red" or "princelings," which means this is in fact a power struggle between these political heavyweights. The reference of second-generation red and princelings is to the descendants of Communist Party elites.

In China, most "private-sector companies" are effectively controlled by the Communist Party through rich and politically well-connected figures.

The spirit of Ah Q

One phrase has gained popularity in recent weeks in China on the Internet: "Zhao jia ren," or "Zhao family." It refers to the families of current and former senior officials who have amassed vast wealth and the power to determine the fates of ordinary citizens. The phrase comes from Lu Xun's famous novel, "The True Story of Ah Q." A monument of Deng Xiaoping, a symbolic political figure for the city of Shenzhen

In the early 20th century, Lu Xun, after studying medical science at an institution in the city of Sendai in northeastern Japan that is now Tohoku University, began pursuing a career as a writer and thinker because he thought literature was more needed for China at that time, which was then a backward, feudal nation.

He created the character Ah Q, a man from the rural peasant class with little education, who was falsely charged with involvement in the looting of the Zhao family, a reputable clan in the village. Ah Q was executed by a firing squad without being given an opportunity to defend himself.

The phrase "Zhao family" is used as slang to describe the rich and powerful, mainly second-generation red and princelings.

Baoneng is said to have ties with a relative of former Vice President Zeng Qinghong, who was a confidant of former President Jiang Zemin. The relative developed a close relationship with Yao Zhenhua, the Baoneng founder, while serving as the representative of an organization of newly emerging real estate companies in Shenzhen. Yao is a legendary entrepreneur who has expanded his first business of selling vegetables into a logistics, property and insurance empire.

Anbang Insurance has been attracting international attention by making high-profile acquisitions in the U.S., Europe and China. Its chairman is married to the granddaughter of Deng Xiaoping, who was China's paramount leader.

Attention is also focused on the company's relation with Chen Xiaolu, the son of Chen Yi, one of communist China's founding generals who once served as foreign minister.

In May 2015, Vanke forged a strategic alliance with Dalian Wanda Group, China's largest developer of commercial properties and based in Dalian, Liaoning Province. The combination of Vanke, the nation's largest homebuilder, and Wanda, the biggest shopping mall operator, was supposed to create an invincible player in the industry that could easily weather the market slump.

Wanda's chairman, Wang Jianlin, is the richest man in Asia. In a lecture delivered at Harvard University in the autumn of 2015, Wang revealed that a company managed by an elder sister and brother-in-law of President Xi Jinping sold its share in his company before its initial public offering.

Wanda has also good relations with many other princelings, including members of the Deng Xiaoping family.

In contrast, Xu Ming, founder of the property conglomerate Dalian Shide Group, met with a speedy downfall after getting embroiled in a major political scandal.

Xu was a business ally of disgraced Chinese politician Bo Xilai, who was sentenced to life in prison in 2013 for corruption and abuse of power. Bo served as mayor of Dalian before becoming secretary of the Communist Party's Chongqing branch.

The Zhao family for Xu was the Bo family, whose fall from grace led to Xu's own ruin. Xu's fate had some intriguing parallels with that of the poor Ah Q.

China Resources is known for its brewery unit, producer of China's best-selling Snow Beer. It grew out of a business founded in Hong Kong by Chen Yun, a leading conservative politician in China who was a main political rival of Deng Xiaoping.

Harvard student Chen Xiaodan, the granddaughter of Chen, was involved in a love affair with Bo Guagua, Bo Xilai's son, who also studied at the prestigious university.

It has been confirmed that the couple made a secret trip to Tibet. Their relationship was approved by their parents, a fact that indicates close ties between the Chen and Bo families.

It is believed that Bo Xilai tried to prevent Xi Jinping's ascent to the top of the Communist Party hierarchy. Many observers think the Chen clan became a target of Xi's attacks on political rivals because of its close ties with the Bo family.

All in the Zhao family

Indeed, all the key players in the takeover battle are members of China's "red aristocracy." Some companies, including China Resources, have suffered heavy losses due to Xi's anti-corruption campaign. There are rumors that the Vanke-Baoneng war is remotely related to the redistribution of interests to make up for these losses.

The Internet and the securities market are abuzz with rumors and speculations about people who belong to the Zhao family. There is a generally accepted belief that the crucial factors that determine the outcome of the battle are not the bosses of the companies involved, but people of the Zhao family who work behind the scenes.

Shenzhen is known as one of the destinations of Deng's famous "southern tour" in 1992, actually a political campaign aimed at revitalizing his "reform and opening up" agenda, which had been undermined by the bloody Tiananmen Square crackdown on pro-democracy demonstrators.

Shenzhen has also been an important city for the Xi family.

The Chinese president's father, Xi Zhongxun, was a communist revolutionary who once served as first secretary of Guangdong Province and got involved in the development of special economic zones in Shenzhen. Xi Jinping's elder sister lives in Guangdong Province.

In 1987, Xi Zhongxun defended Hu Yaobang when the reformist leader was blamed by party elders for student protests, which his political opponents claimed were encouraged by his "laxness" in responding to student movements. This caused Xi to incur the disfavor of Deng and end up in effective retirement. After his health conditions deteriorated, Xi spent time in the 1990's recuperating in Shenzhen. Backhoes dig out construction waste after a massive landslide occurred in Shenzhen in December 2015. Around that time, two important government conferences on real estate were being held in Beijing.   © Xinhua/Kyodo

This clearly shows Chinese leaders' serious concerns about how huge stocks of unsold houses were exerting a strong downward pull on the economy, threatening to hurt the power base of the administration.

Despite such desperate efforts by the government to stoke the economy, however, the Shanghai stock market tumbled at the beginning of the new year.

In order to ensure that the economy will ride out the current rough patch, Beijing needs cooperation from major real estate companies. Observers are closely watching Beijing's decisions as to which companies it will select as key partners in tackling the challenge.

They are also closely monitoring how the Vanke-Baoneng takeover battle will pan out, focusing on whether it will create casualties in the form of lower-rank officials being arrested and affiliate companies being forced out of business.