AUCKLAND, New Zealand -- Radical changes are underway in Norfolk and Pitcairn islands, two tiny Pacific island communities some 6,000km apart that share a link with the infamous 1789 mutiny on the HMS Bounty. 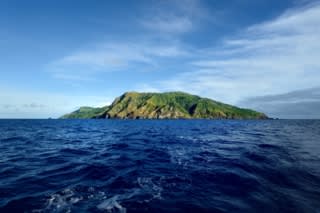 Pitcairn, more than 2,000km from Tahiti, is one of the world’s most remote inhabited islands. (Photo by Tony Probst)

Norfolk Island, a self-governing Australian dependency of 35 sq. kilometers and a population of about 1,800, will hold a referendum on May 8 on controversial plans announced by Canberra to impose direct federal control, mainly because of financial problems.

In stark contrast, isolated Pitcairn Island, Britain's last Pacific dependency, is celebrating the U.K.'s declaration in March of plans for the world's largest continuous marine reserve, from which it could gain a badly needed economic boost.

Both Pitcairn and Norfolk were settled initially by mutineers from the Royal Navy warship HMS Bounty, which was seized from its commander,  William Bligh, by Fletcher Christian and many of the ship's crew. After casting Bligh and his supporters adrift, Christian eventually led his men, with 24 Tahitians, to uninhabited Pitcairn, where they burned the ship and lived secretly. Most of the population of Pitcairn moved in 1856 to Norfolk, where a third of the population now claims descent from the mutineers.

Norfolk, which lies 1,000km northwest of Auckland, became self-governing in 1979, but Jamie Briggs, an Australian federal assistant minister, said in April that services were well below the standard expected by Australians, while islanders "do not fully participate in the Australian taxation system.

"Although commonsense, these reforms represent significant change for the local community," Briggs said. "Ultimately, our goal is to put Norfolk Island on a more sustainable footing."

The takeover proposal has passed mostly unnoticed in Australia, but Norfolk's Chief Minister Lisle Snell has organized a referendum on May 8 asking the islanders whether they approve of the changes. Canberra needed to know the "true wishes of the people," who were about to lose their democratic rights "on questionable advice and for no proven valid reason," said Snell.

Andre Nobbs, a former chief minister who is now Norfolk's tourism minister, told the Nikkei Asian Review that Canberra was imposing "socially and economically disastrous changes." The islanders, Nobbs said, were a "race of people who commenced following the infamous mutiny...melding Tahitian and English lineages to form a unique DNA, culture, language, cuisine...a community who evolved mostly in isolation."

Norfolk was not financially unsustainable, and its exclusive economic zone generated 60 million Australian dollars ($47.9 million) a year from fishing licenses that Canberra keeps, Nobbs said. "I am absolutely disgusted with Australia's arrogance and inappropriate treatment."

Brett Sanderson, a Pitcairn descendant who lives on Norfolk, said that Canberra was "dead scared of a local referendum, as it may put paid to their propaganda campaign, spin and mistruths."

Norfolk Environment Minister Ron Ward told the NAR that Canberra's takeover move followed a number of official inquiries over the decades in which "a number of people with axes to grind had complained and created a negative impression." There had been "an accumulating of grumbles" that overlooked the fact that Norfolk was happy with incremental changes, but did not support a complete federal takeover. Ward said politicians in Canberra had been happy to make smaller governance changes, but government officials had decided: "Let's fix up Norfolk once and for all."

Malakai Koloamatangi, director of Massey University's Pasifika Centre in New Zealand said the changes proposed by Canberra did not recognize the islanders' democratic rights. "It has had its own cultural history, traditional practices...so the best approach when dealing with a separate entity or separate people...is to go about it in a transparent and consultative way," he told Radio New Zealand International, adding Australia had not done that.

Pitcairn, one of the world's most remote island groups, lies roughly 2,170km east-southeast of Tahiti and just over 6,600km from Panama. It has remained largely inaccessible, without an airport and with only tenuous sea connections, mainly to New Zealand. A decade ago it became mired in an under-age sex scandal that saw a large proportion of its adult male population convicted of various offences under British law.

Before the shipping industry's containerization revolution, Pitcairn earned much of its revenue selling souvenirs to passing ships and passenger liners, as well as postage stamps. But few ships call these days, leaving the island with few sources of income and increasing the population's sense of isolation.

However, the U.K. government has in recent years stepped up efforts to develop a sustainable economy on Pitcairn. It gave the final go-ahead in the annual budget in March for a marine conservation area covering 840,000 sq. kilometers - about 2.6 times the land area of the British Isles. The U.K. is also responsible for the world's second-largest protected marine area -- around the British Indian Ocean Territory, also known as the Chagos Islands, which covers 640,000 sq kilometers. The U.S. Pacific Remote Islands Marine National Monument is larger, at 1.2 million sq. kilometers, but is not continuous.

London hesitated over creating the Pitcairn reserve because of the difficulty of monitoring such a large stretch of ocean, which  is plagued by illegal fishing. The U.K. said the go-ahead was dependent on a "practical naval method of enforcing the [reserve] at a cost that can be accommodated within existing departmental expenditure limits."

The answer is Project Eyes on the Seas, developed by the U.K. company Satellite Applications Catapult, which analyses multiple sources of live satellite tracking data, allowing experts to monitor vessels in protected areas, including fishing boats.

The Pew Charitable Trusts, a U.S. group that has helped to fund the system, said it will have a vital role in fighting illegal fishing. "Project Eyes on the Seas...will enable authorities to share information on those vessels operating outside of the law, build a comprehensive case against them, track them into port or within reach of enforcement vessels, and take action against them," said Joshua Reichert, Pew's executive vice president.

Pitcairn Island resident Simon Young, a descendant of mutineer Ned Young, said the residents of Pitcairn unanimously supported the reserve, believing it will attract visitors. "This is an enormously positive environmental step towards the sustainability of our oceans," he said in an email. "We on Pitcairn can be immensely proud of this legacy, and we hope that this will have beneficial impacts on our own community's future development."

While campaigning for the reserve, National Geographic Explorer-in-Residence Enric Sala said he had seen paradise. "We observed extraordinary things, from the pristine reef at Ducie Atoll formed by pale blue corals looking like giant roses, to the sharks moving elegantly, like synchronized swimmers, over a sandy patch at Henderson Island," he wrote. "We found species never reported before for the Pitcairn islands, including algae, corals, reef fishes, and some deep-sea sharks that we still need to identify."

The announcement was welcomed by a coalition of more than 100 conservation and environmental organizations that campaigned for the reserve. Matt Rand, director of Pew's Global Ocean Legacy project, said it "will build a refuge of untouched ocean to protect and conserve a wealth of marine life."

The British actor Helena Bonham Carter claimed some of the credit, saying a photo shoot in which she posed nude with a tuna had helped: "I never knew taking my clothes off could be so effective. I must do it more often," she said.