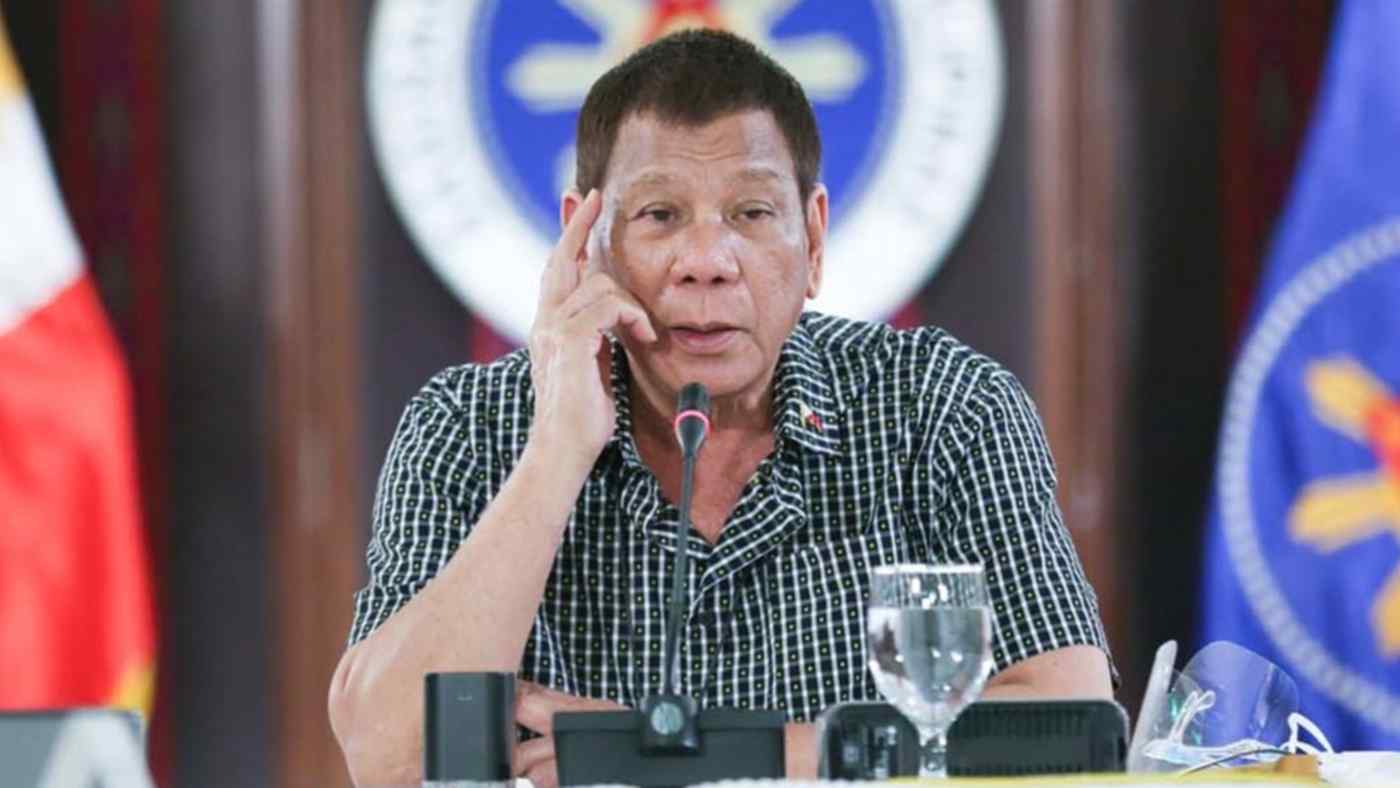 MANILA -- This will be the worst year for Jose Gaw's 35-year-old furniture business. His shop was shut for three months and has struggled since reopening in the middle of a recession. Gaw's outlook may have deteriorated -- he is unsure how soon he can recover -- but his trust in President Rodrigo Duterte has not.

"If others were in President Duterte's shoes, the situation could have been much worse," Gaw, 75, told Nikkei Asia. "We trust the president because he is honest. Remember when he returned a Rolex given by a tycoon? That alone makes him trustworthy."

Gaw's sentiments are shared by many in the Philippines, which has grappled with record hunger, unemployment, economic contraction and the highest number of COVID-19 infections in Southeast Asia.

The societal pain came after Duterte imposed one of the world's longest lockdowns to combat the virus, which he initially played down.

But stunning critics and analysts, Duterte scored a record 91% public approval rating in a Pulse Asia survey that was taken in September and released this week. It was the first major poll conducted in the wake of the health and economic crisis.

The poll's outcome underlines Duterte's unshakable popularity and reflects the resilience of leaders who are seen as populists, such as Indian Prime Minister Narendra Modi and Brazilian President Jair Bolsonaro, who have maintained high levels of public support despite criticisms of their responses to the pandemic. 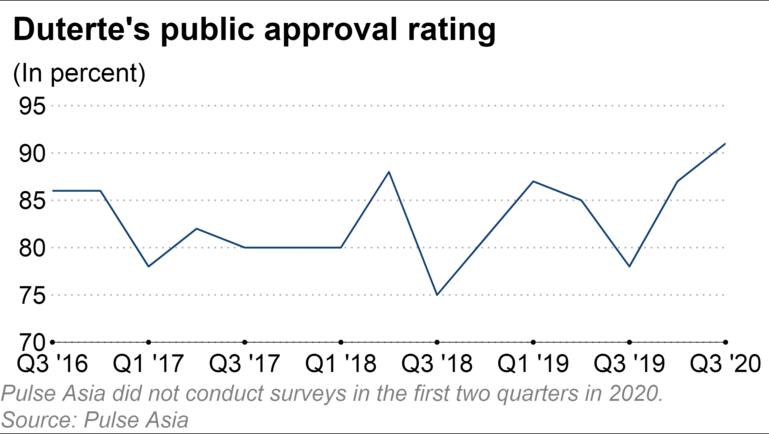 For Duterte, the high public support rate could hand him political capital to take bold steps to revitalize the economy, including a corporate tax reform plan. It could also give him more sway when it comes to endorsing a successor in 2022, analysts say.

Duterte is constitutionally limited to a single six-year term.

Duterte's popularity has been buoyed by cash handouts to around 20 million low-income families, by subsidies for workers and by loan reprieves that benefited the middle class, analysts say. "I support him because he gave cash aid to Filipinos," said Marjorie Elane, 40, who works at a laundry shop in Manila.

The survey took place after lockdown restrictions had been relaxed and after Duterte signed a second economic relief measure.

Duterte was also seen as a hands-on leader amid the crisis, according to Sherwin Ona, who heads the political science department at the De La Salle University in Manila. 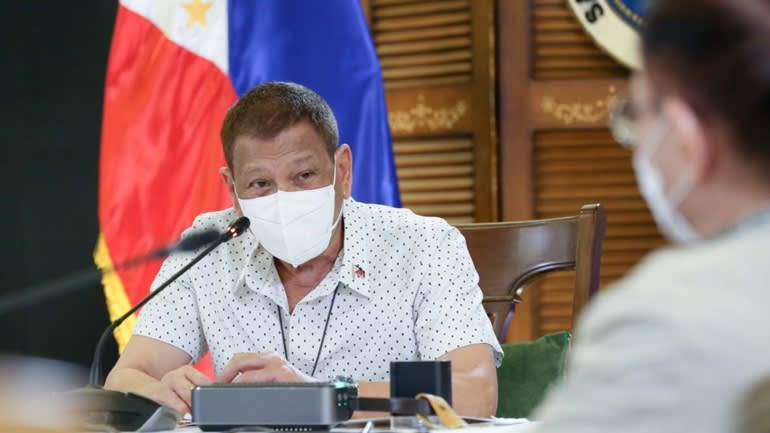 Duterte presides over a meeting with core members of the Inter-Agency Task Force on the Emerging Infectious Diseases in Davao City on Sept. 21. (Photo courtesy of Presidential Communications Operations Office of the Philippines)

In his regular televised meetings with his cabinet, Duterte has ordered officials to look for money for the poor and to sell state assets if need be. He has repeatedly assured the public he is seeking vaccines from China and Russia. He has also vowed to go after politicians stealing cash assistance and executives of the state-run Philippine Health Insurance Corporation who became embroiled in a corruption scandal amid the health crisis.

"This is his strength," Ona told Nikkei. "Apart from being a populist leader, he is a very good communicator. Because of his masterful way of communicating his policies, he was able to insulate himself from all of these controversies."

Since Duterte became president in 2016, his common man personality and tough-guy persona have appealed to many. When the coronavirus crisis came along, many Filipinos were already picturing Duterte as a crime-buster, an image they have since learned to adore.

"I support the president because he killed the drug addicts and fired all corrupt officials in the government," said street vendor Nasser Mamakolay, 60. "That's what I like about him. But I didn't really like the lockdown because of many lost jobs."

Dennis Coronacion, political science department chair at the University of Santo Tomas in Manila, said critical media coverage of the government may have been drowned out by Duterte's aggressive social media army following the closure in May of ABS-CBN, the Philippines' largest broadcaster, which clashed with Duterte.

After ABS-CBN's free TV service went off the air, "many people received less-critical, neutral or positive news about the government," Coronacion said. ABS-CBN supporters hold protest placards as the Philippine congress finalizes a decision regarding the broadcast network's franchise, outside the ABS-CBN headquarters in Quezon City, Metro Manila, Philippines, on July 9.   © Reuters

Richard Heydarian, author of "The Rise of Duterte: A Populist Revolt Against Elite Democracy," says the pandemic has aided the rise of leaders like Duterte. "It seems that enthusiasm [for strongmen] is not going away and if anything, the element of panic, fear and anxiety actually help ... populist movements," Heydarian said during a forum put on Thursday by the Foreign Correspondents Association of the Philippines.

Bob Herrera-Lim, an analyst at risk consultancy Teneo, said a weak and fragmented opposition has helped Duterte solidify his base but cautioned that a slow economic recovery could disappoint people.

"Duterte now has little reason to fear instability or even a popular challenge from the opposition," Herrera-Lim said in a research note. But "Duterte's approval ratings could still drop in the middle of next year, especially if a vaccine is still widely unavailable and the economy remains very weak."

Coronacion, the political science professor, believes Duterte is unlikely to fall out of Filipinos' favor as long as people are being given some form of assistance. "Filipinos tend to think short-term," Coronacion said. "We are too parochial. I hate it. But it is what it is."