What is in the bill?

Current law requires foreign investors to obtain approval from regulators for investments in a wide range of sectors when the investor plans to buy 10% or more of a Japanese company's issued shares.

Under the new rules the threshold will be lowered to 1% and will apply not only to issued shares but to all investments comprising 1% or more of a company's total voting rights.

Why is Japan tightening the regulations?

The government says the measures are aimed at protecting national security and follow similar steps in the U.S. and the European Union. They are designed to "appropriately respond to investments that may impair national security," according to a presentation submitted by the Ministry of Finance on Oct. 8.

The changes come as the U.S. takes aggressive measures to prevent technology leaks to China. In August, Japan added cybersecurity to the list of sectors that fall under the rules, according to Yuki Kanemoto, a director at Daiwa Institute of Research.

Which sectors will face stricter scrutiny?

While national security is cited as a key reason for the legal change, the proposal covers an array of sectors. Based on a document published by the Finance Ministry on Oct. 18, areas subject to the new rules fall into four broad categories: national security, public order, public safety and smooth operation of the Japanese economy. Each of these categories is broken down into individual sectors.

Weapons, aircraft and nuclear energy, among others, fall under national security, "while smooth operation of the Japanese economy" category includes agriculture and shipping.

Because the terms are broad, it is unclear which companies will actually be affected. "Will small companies that develop cybersecurity software be affected? It is unclear at the moment," said Kanemoto. 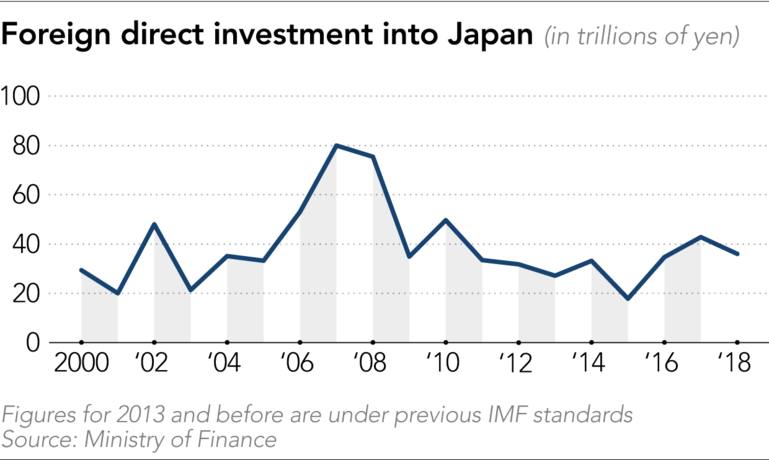 What are the implications of the change?

Japan is home to the world's third-largest stock market by value. Many of Japan's top companies are publicly traded and foreign investors have substantial holdings in them. If these investors are not exempt from the new requirements, many will face additional disclosure requirements, adding to their administrative and legal costs.

The changes may also stifle the wave of investor activism that is gaining momentum in Japan. For example, Kyushu Railway has faced demands from New York-based hedge fund Fir Tree Partners, including over the appointment of directors. The transport sector will be subject to the legal changes.

How have investors responded?

Since the idea was floated in September, the government has faced criticism from foreign investors over its potential to dampen foreign direct investment. "There is a significant risk that Japan's inward FDI could decline," wrote strategists at Goldman Sachs in an Oct. 16 note, according to Bloomberg.

Since taking office in December 2012, Abe has pledged reforms to attract more foreign investment to Japan. Foreign direct investment rose from 17.75 trillion yen ($160 billion at the current exchange rate) in 2015 to 42.7 trillion yen in 2017. But the figure but fell back to 35.9 trillion yen last year, according to data from the Finance Ministry.

In response to the outcry, the Finance Ministry has created exemptions for certain investors, including brokerages conducting proprietary trades banks, insurance companies and asset managers that invest passively. However, they will only be exempted if they agree not to serve as directors, do not propose sales of key businesses and do not seek access to confidential technology or information.

The proposal is scheduled for submission to the Diet before the current session ends in December, and it could come into force by the end of next fiscal year, ending March 2021. After the bill passes, the government says it will solicit opinions from market players and clear up any ambiguities in the rules through ministerial ordinances.