For Yokohama, Osaka and Tokyo, casino bids still a game of chance

Skeptical residents, vague deadlines and elections are among the pitfalls YOKOHAMA/OSAKA/TOKYO -- As the Japanese government presses ahead with plans to promote casino resorts under its newly liberalized gambling law, cities hoping to host them are running into obstacles even before the bidding begins.

The contenders to host the first three govenment-approved casinos each face their own problems. In Yokohama, southwest of Tokyo, residents are cool to the whole idea. The western city of Osaka is wrangling with casino operators and construction companies over scheduling. And Tokyo cannot seem to make up its mind whether or not to bid for a casino ahead of a gubernatorial election scheduled for July 2020.

Yokohama Mayor Fumiko Hayashi held her first public meeting with residents on Dec. 4 to explain the city's bid. She told a skeptical audience that Yokohama "will pick a proposal that everyone can be comfortable with," and touted the economic benefits.

Yokohama is one of four cities and regions that have announced bids, along with Osaka, Sasebo in Japan's southwestern Nagasaki Prefecture, and Wakayama in western Japan. Some time during the next fiscal year starting in April, Yokohama will draw up a plan for an "integrated resort" that combines a casino and other entertainment facilities.

The project has sparked a lot of interest and concern, but only 376 out of the more than 950 people who applied were able to attend the public meeting due to a lack of seats.

"Why won't you consider a resort without a casino, knowing that there are people who oppose [casinos]?" asked one participant.

"I understand that there are people worried about it," Hayashi said, adding that she will keep working to win people over. Yokohama Mayor Fumiko Hayashi speaks at a public meeting on the city's plans for a casino in Yokohama on Dec. 4. (Photo by Yumiko Urasaki)

There were other questions: How will the tax money generated by the casino be used? How will parts of the city far from the resort be affected?

Some in attendance were not impressed. One 63-year-old man said the event revealed little about the casino project. "I think this is only being held to take some heat off." A 32-year-old woman said the first 30 minutes of the presentation were unnecessary. "I felt the city didn't really want to clarify" its plans, she said.

The strongest opposition was seen outside the meeting. As Hayashi talked up the casino, opponents held a protest demanding a referendum on whether the project should be allowed to proceed.

The city plans to host public meetings in all of Yokohama's 18 districts by March 2020. It hopes to open the resort in the last half of the 2020s at Yamashita Pier, a 47-hectare site near the city center. Yamashita Pier is a strong candidate for casino resort location for city of Yokohama.

Not everyone is opposed, of course. Local businesses, led by the Yokohama Chamber of Commerce and Industry, have formed a consortium to promote the plan, and the group took out a full-page advertisement in a local newspaper to voice their support. The consortium will host a convention for the resort on Jan. 29 and 30.

The central government passed the contentious law legalizing gambling resorts in 2018, something proponents had spent nearly two decades pushing for. The idea is to attract more foreign tourists to Japan, although many people worry about the effect of gambling houses on local communities.

The government will set up an oversight body in January. Local authorities interested in hosting resorts are expected to select operators by early 2021, with the first three casino licenses to be awarded later.

But as in Yokohama's case, persuading residents that having a casino next door is a good idea may prove difficult -- so much so that in late November the northern island of Hokkaido decided not to bid for a resort, despite support from business leaders. 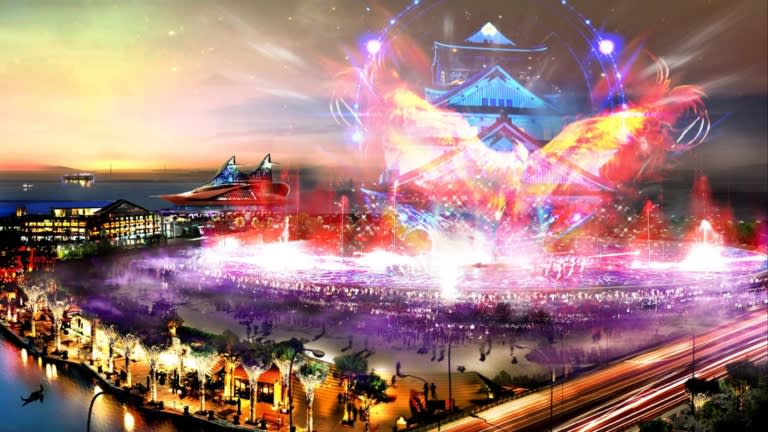 An artist's rendering of integrated resort in Osaka that the city hopes to open before the 2025 World Expo, which it will host. (Photo courtesy of City of Osaka)

Other issues include coming up with a detailed development plans. The city and prefecture of Osaka are another contender for a casino, and they were the first to present a preliminary plan in late November. But they declined to give a firm timeline for the project.

The draft proposal says Osaka "aims" to open the resort before it hosts the World Expo 2025, giving itself some wiggle room. People familiar with the matter said that setting a hard deadline for casino operators and construction companies would scare off potential partners.

"There are some uncertainties, and it was hard to set absolute conditions for contractors," said Hirofumi Yoshimura, governor of Osaka Prefecture, at a news conference on Nov. 21. But, he added, "We are not in a situation where we must give up" on opening before the expo.

One person close to the bid told Nikkei that there are too many variables with regard to the start of construction and plans for the expo. It would be hard for companies to participate if they were given a clear deadline, the person said.

"If no company is willing to participate, there is no point," Yoshimura said.

By the time Osaka began accepting proposals from operators on Dec. 24, it had decided to set the deadline for opening for March 2027, nearly two years after the six-months Expo begins in May 2025.

Other cities have expressed interest in bidding, but are still weighing their options. Tokyo, along with nearby Chiba, and Nagoya in central Japan, are among them. Tokyo Gov. Yuriko Koike has said only that Tokyo is considering a bid.

A local politician said Koike does not want to bring up a thorny issue before the gubernatorial election scheduled for July 2020. 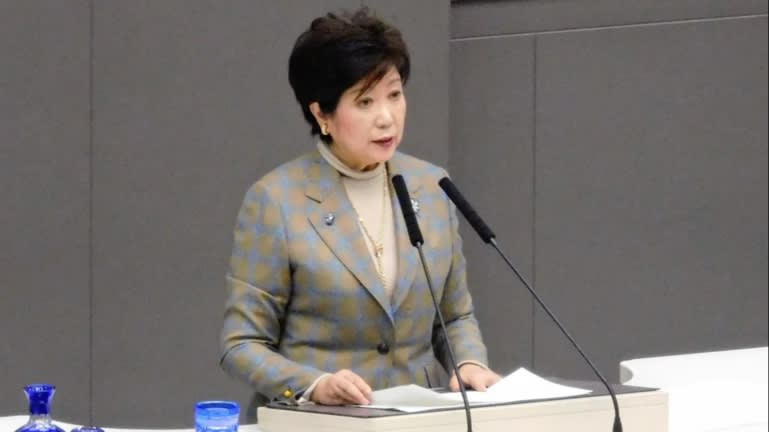 Tokyo Gov. Yuriko Koike speaks at the Tokyo Metropolitan Assembly on Sept. 26. She has declined to take a clear positon on a casino bid ahead of an election in July 2020. (Photo by Kimihiko Kouhata)

Within the Tomin First no Kai, the largest political grouping in the Tokyo Metropolitan Assembly, led by Koike, "It is a taboo to speak about a casino resort before the election," one source said. Komeito and the Liberal Democratic Party are the next largest groups, and Komeito support the governor on most issues. But Komeito is also said to be strongly opposed to gambling, especially its female backers.

The split apparently delayed the presentation of a blueprint for the Aomi Bay area development until after September 2020. The presentation had been scheduled for late 2019. The plan aims to keep the area vibrant after the 2020 Tokyo Olympics, but the draft proposal put forward by a combined public- and private-sector team included a casino, which gave the city cold feet.

Koike waffled on the casino question at a Nov. 22 news conference. "There are both merits and demerits. There is no change in our stance to continue considering it, looking at the overall picture."